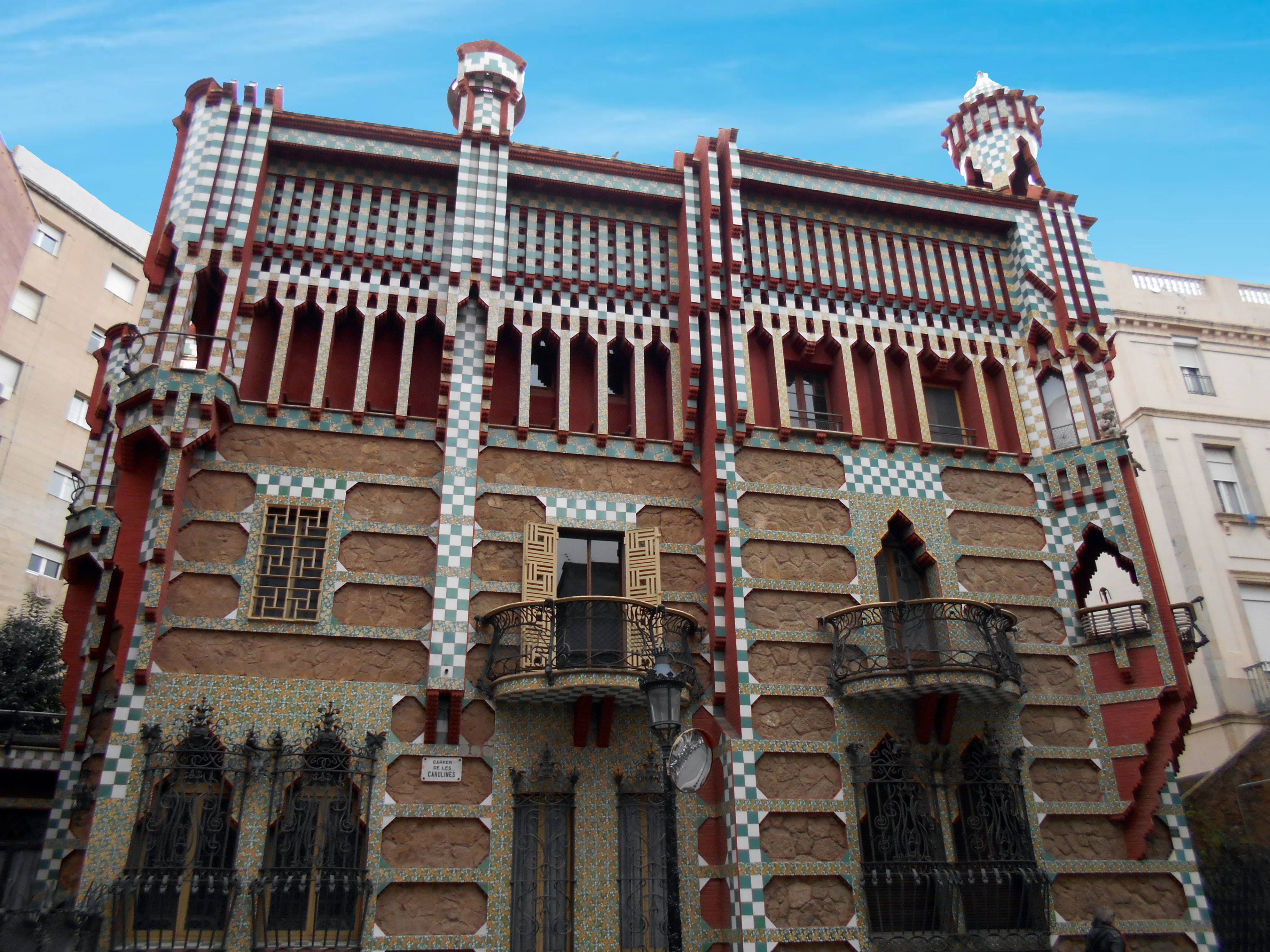 Casa Vicens is a modernist building located in Barcelona, ​​in the Gracia district. Work of Antoni Gaudí, it was the first important project of the architect. It was built between 1883 and 1885, although Gaudí drew up the original project between 1878 and 1880. The work is framed in an orientalist style, close to the neo-Mudejar, although interpreted in a personal way, with the stamp of originality that Gaudí knew how to contribute to his projects. In this work, Gaudí outlined for the first time some of his constructive resources that would be common in the emergence of modernism. At the time, it was a highly commented work, which caused a great sensation among the public of the time. At the time the building was built, Gracia was still an independent urban nucleus of Barcelona and possessed of its own town hall, with the category of villa, although it is currently a district of the city. The original project had a large landscaped space, in addition to the house, but over time the land was parceled out and sold for the construction of residential buildings. At present, the complex is only reduced to the house and a small surrounding space. To take advantage of the space, Gaudí carried out a project of three facades, with the house attached by a dividing wall to an adjoining convent. In 1925 an extension of the house was projected, a commission that was offered to Gaudí, which he refused; instead, he proposed to one of his disciples, Joan Baptista Serra, who made a new bay following Gaudí's original style, with the inclusion of a new façade, leaving a building with four winds. This work belongs to the orientalist period of Gaudí (1883-1888), a period in which the architect made a series of works of marked oriental taste, inspired by the art of the Near and Far East (India, Persia, Japan), as well as in Hispanic Islamic art, mainly Mudejar and Nasrid. At this time, Gaudí used ceramic tile decoration with great profusion, as well as mitral arches, exposed brick cartouches and temple-shaped or dome-shaped finishes. The building was declared a Historic-Artistic Monument in 1969 with registration number 52-MH-EN, Asset of Cultural Interest in 1993 with reference RI-51-0003823 and World Heritage Site in 2005 with reference 320bis. [1]

Antoni Gaudí (Reus or Riudoms, 1852-Barcelona, ​​1926) studied architecture at the Lonja School and at the Barcelona School of Architecture, where he graduated in 1878. To pay for his degree, Gaudí worked as a draftsman for various architects and builders, such as Leandre Serrallach, Joan Martorell, Emilio Sala Cortés, Francisco de Paula del Villar y Lozano and Josep Fontserè. [2] Once he obtained the title of architect in 1878, his first works were street lamps for the Plaza Real, the Girossi Kiosks project, the showcase for the Esteban Comella Glove box and the furniture for the chapel-pantheon of the Sobrellano palace in Comillas, all from the same year of graduation, as well as the Mataronense Worker Cooperative (1878-1882), which was his first important commission, although it did not materialize as a whole, since only one ship was built. His next productions were the furniture for the Gibert Pharmacy (1879) and the works for the Congregation of Jesús-María in Barcelona and Tarragona (1879-1881). [3] Gaudí combined the construction of Casa Vicens with other commissions: in 1883 he took over the works of the Expiatory Temple of the Sagrada Familia, which began the previous year with a project by Francisco de Paula del Villar y Lozano, which he resigned shortly after due to disagreements with the construction board; Gaudí would spend the rest of his life in the construction of the temple, which would be his magnificent work and the synthesis of all the findings of his arch