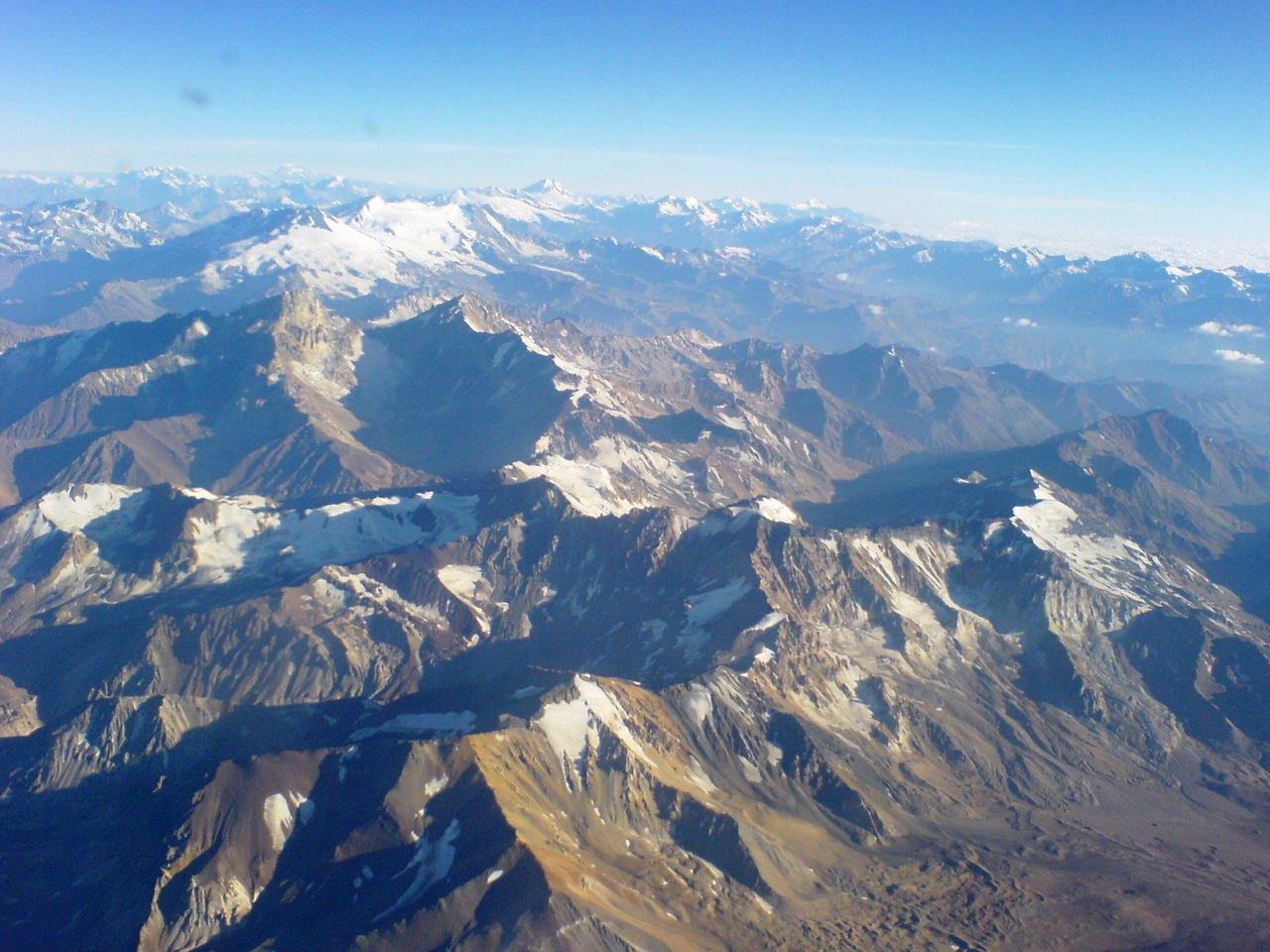 The Andes mountain range occupies the western part of South America, bordering its entire Pacific Ocean coast. It has a length of 8,500 kilometers, making it the "longest continental mountain range on Earth".[1] From its northern end, in western Venezuela, it crosses Colombia and Ecuador; in the center of South America it crosses Peru and Bolivia; in the south, it serves as a natural border between Chile and Argentina, and has its southern end in Tierra del Fuego. It has a variable width of between 250 and 750 km.[2] It occupies an approximate area of ​​2,870,000 km².[3] Its average height is between 3,000 and 4,000 meters above sea level. n. m., [1] it houses the highest volcanoes on the planet and its highest point is Aconcagua, whose 6962 m s. n. m.[4] make this mountain the highest on the planet outside of Asia. Due to its significant volcanic activity, it is part of the Pacific Ring of Fire. In the central zone, the Andes widen, giving rise to the high plateaus of the altiplano and puna, shared by Argentina, Bolivia, Chile and Peru. From the central highlands to the north of Peru and in Ecuador it becomes narrow again and in Colombia it becomes wide by dividing into three branches, Cordillera Occidental, Cordillera Central and Cordillera Oriental, the latter continuing northwest into Venezuela becoming the Cordillera de Mérida. being the only Andean chain in the country. From the highlands to the south, the mountain range has a general north-south direction and is the area where the highest mountains are found. At the southern end, it curves east-west and sinks into the Atlantic Ocean east of Isla de los Estados.[5] It was formed at the end of the Mesozoic era, at the end of the Late Cretaceous, by the movement of the convergence of the Nazca plate under the South American plate. Subsequent seismic movements and volcanic activity have been more important in shaping the relief than external erosive agents. In the current morphology there are high mountain ranges, together with extensive plateaus and deep longitudinal valleys parallel to the great mountainous axes. Transversal valleys are scarce, except in the Argentine-Chilean Andes. Many of the world's major metallic mineral deposits are associated with converging plate boundaries, such as the Andes or the Rocky Mountains.[citation needed]

The word Andes comes from the anti expression of the Quechua language that means east, cardinal point where the Sun rises.[6][7][8]​ The manner in which it became the name of the mountain range is explained in Royal Comments of the Incas written by the Inca Garcilaso de la Vega:[9] Other compound words that contain the particle anti are: anteruna (inhabitant of the Andes) and anteunccuy (evil of the Andes) The change from Quechua Anti to Castilian Andes is explained because in Quechua the sound expressed by the consonant d is not used. There is another etymology according to which anti could come from anta which means copper.[10][11] The German philologist Johann Karl Eduard Buschmann proved that this could not be true since Quechua maintains the final a in compound words, as in Antamarca (province of copper).[12][13]​

The solid surface layer of the Earth, called the lithosphere, is divided into relatively rigid fragments, called tectonic plates, which move on the asthenosphere, a relatively plastic zone. There are 15 large plates and more than 40 micro plates. The plates include an upper layer called the crust which can be oceanic or continental crust and thus the plates can be classified into oceanic and mixed plates. The Andes mountain range originates from the interaction of the Nazca oceanic plate with the continental part of the South American plate. In its northern and southern areas, they also participate in the proc