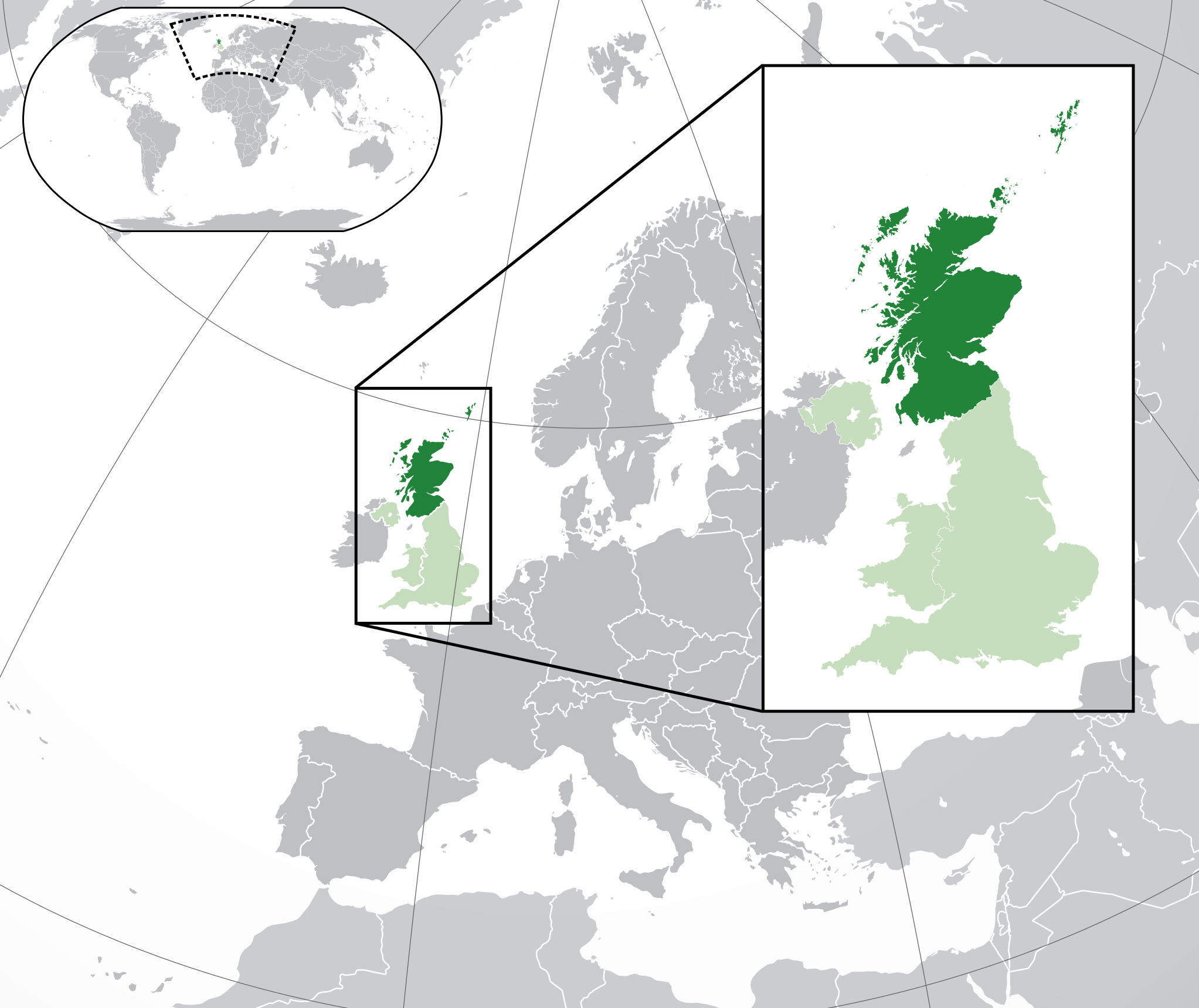 Scotland (in English, Scotland; in Scottish, Scotland; in Scottish Gaelic, Alba) is the northernmost of the four countries that make up the United Kingdom. Along with England and Wales, it is part of the island of Great Britain, covering a third of its total area; It also consists of more than 790 islands. It limits to the north and west with the Atlantic Ocean; to the east with the North Sea, to the south with England and to the southwest with the North Channel and the Irish Sea. The Scottish territory covers 78,772 km², and its population was estimated at 5,463,300 inhabitants in 2019,[4] which gives a population density of 67.5 inhabitants per km². The capital is Edinburgh, while Glasgow is the largest city and its metropolitan area accounts for 40% of the total Scottish population. Scotland takes its name from "Scotus", a Latin term meaning "Irish" (the plural form is "Scoti", "Irishmen").[5] This refers to the Gaelic settlers of Ireland, a country that the Romans initially called "Scotia" (feminine form of "Scotus").[5] The Irish who colonized present-day Scotland were known as "Scoti". The Romans of the Early Middle Ages used the name "Caledonia" to refer to present-day Scotland.[5] The Kingdom of Scotland was an independent state until 1707, when the Act of Union was signed with England to create the Kingdom of Great Britain. The union did not imply an alteration of the legal system of Scotland, which since then has been different from that of Wales, England and Northern Ireland, reason why it is considered in international law as a different legal entity. The survival of its own laws, and a differentiated educational and religious system are part of Scottish culture and its development over the centuries. Emerging in the 19th century, Scottish independence has gained influence since the end of the 20th century; represented by the Scottish National Party which advocates Scottish independence[6] and won an absolute majority in the Scottish Parliament in the May 2011 elections. In 2014, the Scottish government and David Cameron's Conservative government reached a agreement to propose a referendum on Scottish independence that was held on September 18 of that same year, winning continuity in the United Kingdom by 10.6 points.

The Anglo-Saxon Chronicle of the 10th century is the oldest document in which the term Scotland appears, formed from the Latin term Scoti, of dubious origin, used as a reference to the inhabitants of Hibernia (present-day Ireland). The word Scotia, appearing in Vulgar Latin, was used only to refer to the area of ​​Scotland where Gaelic was spoken; furthermore, this term alternated with Albania, coming from the Gaelic term for Scotland, Alba. The use of the term Scotland to refer to the entire Scottish territory only became general in the late Middle Ages. In modern times the term Scot is applied to all inhabitants of Scotland, regardless of their ethnic origin, as Scottish identity is primarily civic and not ethnic or linguistic. The term Scot is also used to refer to the Scottish language, spoken in some areas of the Lowlands or Scottish Lowlands.

The flag of Scotland or The Saltire consists of a cross or Cross of Saint Andrew white on a blue background, an emblem that also became part of the flag of the United Kingdom or Union Jack in 1606. There are many other symbols of Scotland, official or not. , such as the thistle (the national flower), the Declaration of Arbroath, the drawing of the tartan, related to the Scottish clans, or the "Lion Rampant" flag that appears on the Royal Standard of Scotland.[7][8] ]​[9]​ The national motto is Nemo me impune lacessit, which can be translated as "No one offends me with impunity", and which