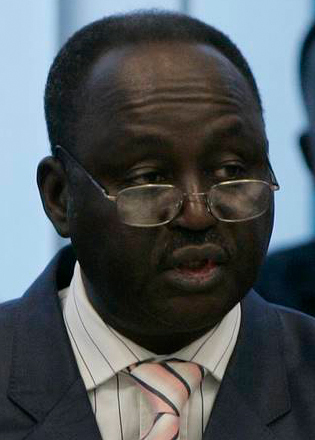 François Bozizé Yangouvonda (October 14, 1946 in Mouila, Gabon) is a Central African military and politician, who was president of the Central African Republic between 2003 and 2013. He ascended to power in March 2003 after leading a rebellion against the previous president of the Republic, Ange-Félix Patassé. He won the 2005 elections, rigged, [citation needed] receiving the majority of the votes and proclaiming himself president in the second round of May 2005. In 2011 he won the presidency for the second time in the general elections, being recognized as president by the international community and the UN, despite the manifest illegitimacy of his regime. On March 24, 2013, the Séléka insurgent coalition seized the Presidential Palace and Bozizé fled to the Democratic Republic of the Congo.

In 1966, he entered the Special School for the Training of Active Officers (ESFOA) in Bauar, at the same time that the military regime of Jean-Bédel Bokassa was being established. In 1969 he was promoted to lieutenant, and later to captain and battalion chief in 1976, where he was increasingly integrated into the power circles of the regime. As proof of this, in 1977 he was appointed aide by the already self-proclaimed Bokkasa I, and also named him "technical advisor" to the Ministry of Defense. [1]

After the fall of the Bokkasa regime and the return to power of David Dacko, Bozizé was appointed Secretary of State of the Central African Armed Forces (FACA), whose power was comparable to that of Minister of Defense. In 1981, he completed a military training course at the Higher School of War in Paris, returning to his country in December of that same year, which had suffered a new coup, in which the Dacko government fell into the hands of the General André Kolingba, who appoints Bozizé as Minister of Information and Culture. [1] Despite having received such a position, Bozizé was dissatisfied with the Kolingba regime, to the point of being part of a coup rebellion led by the former -Prime Minister Ange-Félix Patassé, taking place on March 3, 1982. However, the coup failed, so Bozizé was removed from his ministerial position and requested asylum at the French embassy, ​​along with Patassé and other members of the failed coup.

Some time later, Bozizé and Patassé went into exile to Togo, where Patassé settled in France, while Bozizé settled in Benin until 1989, where the government of that country extradited him to the Central African Republic, where he was immediately imprisoned, and according to certain sources, he was a victim of mistreatment and torture. [1]

Liberation and reintegration into politics

After constant pressure from the international community, Kolingba agreed in 1992 to release the country's political prisoners, including Bozizé, plus the convening of presidential elections to guarantee a democratic transition in the country. In them, Bozizé immediately ran as a presidential candidate, where he obtained 1.5% of the votes, positioning himself in seventh place, while Patassé, who had returned to the country that same year, managed to be elected President of the Republic Central African with 88% of the votes. Even so, Bozizé was appointed Chief of the FACA General Staff by the new government. Until 1997, four revolts had already been registered within the Central African army, which were repelled by Bozizé, in which it was discovered that almost all the rebels belonged to the Yakoma, an ethnic minority located in the south of the country, and that one of Its main warlords (made up of ex-collaborators of the Bokassa and Dacko regimes) was the former dictator Kolingba, who longed to return to power. [1] Because