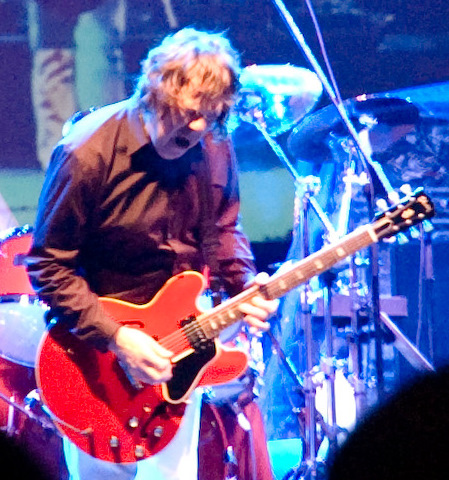 Robert William Gary Moore (Belfast, April 4, 1952-Estepona, February 6, 2011) was a British blues rock and hard rock musician, composer and producer, best known for having been a lead guitarist in bands such as Skid Row, Colosseum II and Thin Lizzy, and for his extensive solo career as a vocalist, as well. Influenced by blues and rock guitarists, at the age of ten he began to practice the guitar in a self-taught way with the support mainly of his father. After joining some local bands, in 1968 he left Belfast to settle in Dublin. In the 1970s he was part of Skid Row (1968-1971), Colosseum II (1975-1978), and Thin Lizzy (1974, 1977, 1978-1979). Parallel to this, he began his solo career partially with Grinding Stone (1973) and Back on the Streets (1978), and collaborated as a session musician for artists such as Cozy Powell, Andrew Lloyd Webber, Eddie Howell, Rod Argent and Gary Boyle. , among others. In 1979, after quitting Thin Lizzy, he traveled to Los Angeles and founded G-Force, whose only album was released in 1980. After two years of working with Greg Lake, in 1982 he signed with Virgin Records and before the end of the decade published five productions with a style linked to hard rock and heavy metal. With them he achieved commercial success in Europe, mainly in the Scandinavian countries. At the end of 1989 he announced that he was bored with metal and would make the album he always wanted to make. Entitled Still Got the Blues (1990), his style was focused on the blues, his main taste in music. Despite the change in style, this production brought him positive reviews from the specialized press as well as an important commercial success, with sales exceeding three million copies. This success was replicated with After Hours (1992) and the live Blues Alive (1993). In 1993 he paralleled his career when he formed the power trio Bruce–Baker–Moore together with Jack Bruce and Ginger Baker; Around the Next Dream, his only album, was released in 1994. After paying tribute to Peter Green —his main influence— with Blues for Greeny (1995), in the second half of the 1990s he experimented with pop and dance with Dark Days in Paradise (1997) and A Different Beat (1999). In the 2000s he returned to blues and blues rock with five studio productions and hard rock with the project Scars (2002). In 2010 he went on a tour where he re-performed his hard rock and heavy metal hits, and he wanted to play rock again on a new studio album. However, these plans were truncated when on February 6, 2011 he died of an acute myocardial infarction, while on vacation in Estepona (Spain). Gary Moore is remembered for his eclectic career, since he played rock, hard rock, heavy metal, blues, blues rock, jazz fusion, among other styles. As a guitarist he had a fast and technical interpretation but at the same time melodic and expressive, he mastered different scales and executed a variety of resources such as legato, hammer-on, shred and pull-off. Regarded as a virtuoso, but underrated, various blues, hard rock, and heavy metal guitarists have cited him as one of his influences. Throughout his career, he was primarily associated with the 1959 Gibson Les Paul, although he played various brands such as Fender, PRS Guitars, Takamine, Hamer, and Charvel. After his death, he has been honored and paid tribute by several artists, posthumous productions have been released and some publications such as Total Guitar, Classic Rock and Louder have included him in the lists of the best guitarists of all time.

Early years and his start in music

Robert William Gary Moore was born on April 4, 1952 in Belfast, Northern Ireland, although he grew up in the Stormont estate, east of the city. He was one of the five children of the marriage composed of Wi