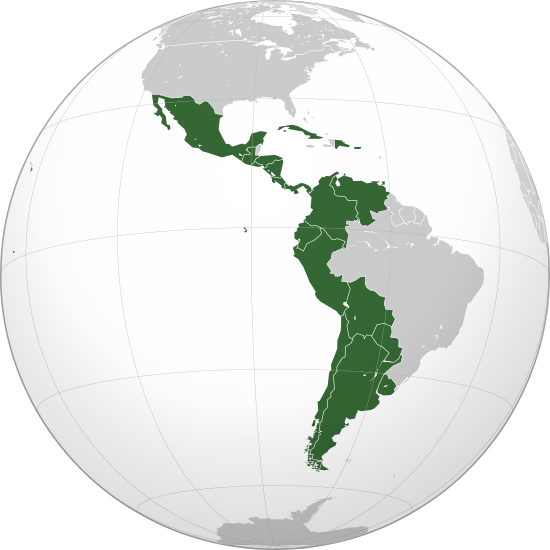 Hispano-America is a cultural region made up of the countries of America where Spanish is mostly spoken. His name is "Hispanic American". It is a territory made up of nineteen countries with a total population of over 400 million inhabitants. In most of them, Spanish is the official or co-official language. In several Latin American countries, Spanish exists alongside various indigenous languages ​​of pre-Hispanic origin, such as Guarani, Aymara, Quechua, Nahuatl, or Mayan. The predominant religion in Latin America is Christianity, especially Catholicism.[2] The term differs slightly from that of Ibero-America, which includes the American nations that have both Spanish and Portuguese as official or co-official languages ​​only. It is also different from the concept of Latin America or Latin America, which supposedly groups together the nations or territories of the American continent that speak Spanish, Portuguese or French. However, the latter is a confusing concept since Latin America is not considered the French-speaking region of Canada. According to the Pan-Hispanic Dictionary of Doubts, Latin America is "the group of Spanish-speaking American countries", therefore excluding the American states "in which the official language is not Spanish". "His name, Hispanic American, refers strictly to what belongs to or is related to Spanish America and does not include, therefore, what belongs to or is related to Spain."[3] There are differences of opinion regarding the particular case of Puerto Rico, because while some do not include it in the region, given that it is one of the unincorporated territories of the United States (a country without an official language), others consider that its status as a state free association is assimilable to the notion of country.

The nineteen countries belonged to the Spanish Empire, hence the spread of the language. In Puerto Rico, Spanish is co-official with English; however, Spanish is the most widely used language on the Caribbean island. The Hispanic countries of South America have an estimated area of ​​more than 8.8 million km² (49%, almost 50% of the South American territory), equivalent to being the fifth largest country in the world in total area (displacing Brazil in the sixth ) but in total the Hispanic American countries give the second largest entity by extension, however without including at all the Antarctic territories claimed by Chile and Argentina that are much more than a million square kilometers.

Thanks to the bull of Pope Paul III Sublimis Deus of 1537, the indigenous men were declared men with all the effects and capacities of Christians.[24][25][26] The Spanish made an effort to incorporate the indigenous into its civilization and its Church, even at the cost of annulling the cultural identity of the natives.[27]

From an ethnographic point of view, the population of Latin America differs from country to country, and even in each geographical area. In some, their population base is made up of native peoples from East Asia who discovered or populated the continent between 25,000 and 14,000 years BC, in others by migrants from Europe and the African continent (as is the case of the Dominican Republic). . At the end of the fifteenth century, Europeans began the conquest, colonization and subjugation of indigenous societies. In Latin America, it was mainly the Spanish Empire that was in charge of conquering and colonizing the territory. The presence of Spanish conquerors, mostly men, produced a first sexual exchange between European ethnic groups (mainly Spanish) and indigenous ethnic groups. In the 16th century there was a great decrease in the indigenous population, which led the Spanish to bring in people of diverse