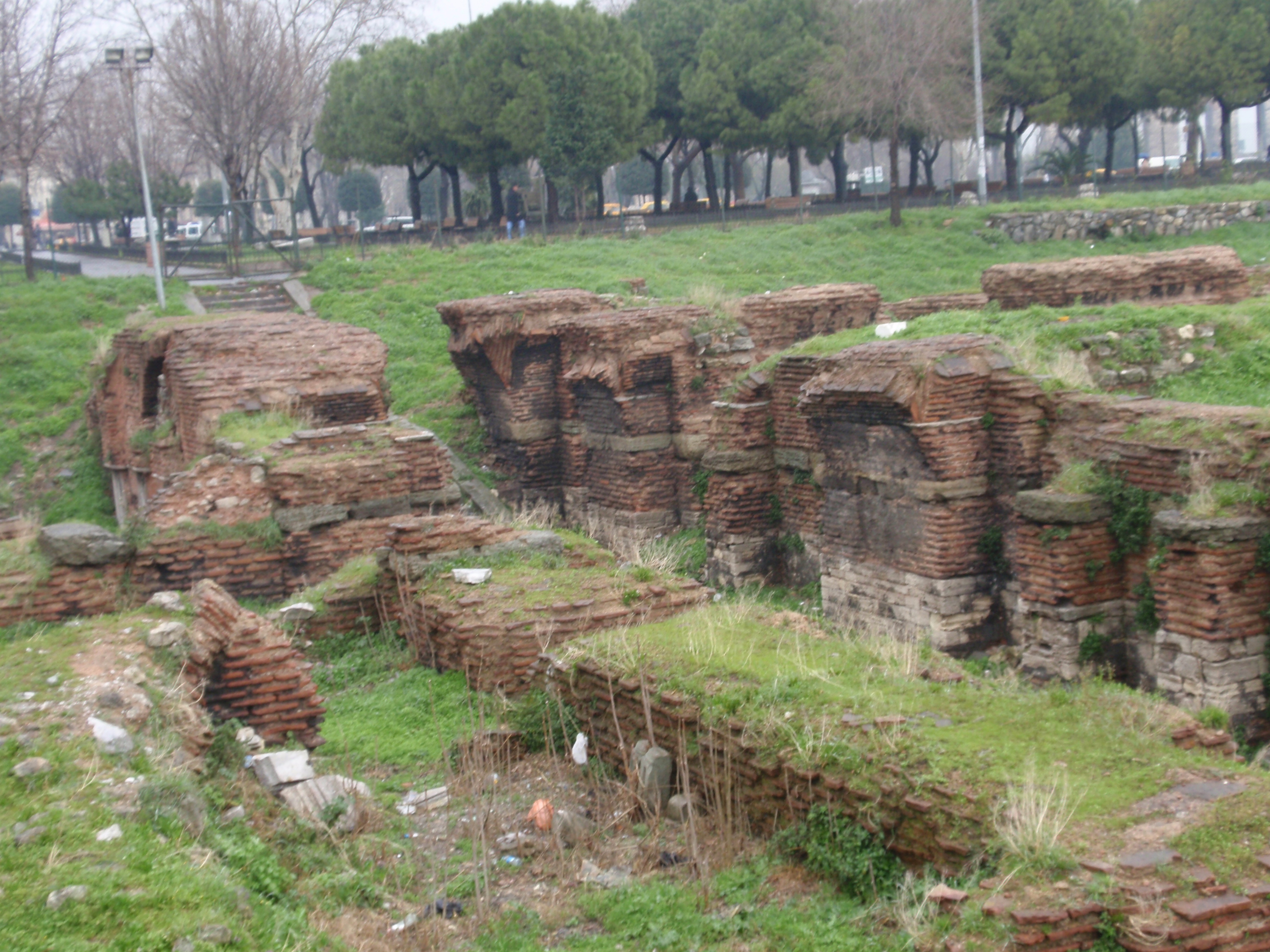 The Church of Saint Polyeuctus (Greek: Ἅγιος Πολύευκτος, Hagios Polyeuktos) was an ancient Byzantine church built in Constantinople —which corresponds to the current city of Istanbul in Turkey— by Anicia Juliana and dedicated to Saint Polyeucto.[1][2] ] Intended as an affirmation of Juliana's own imperial lineage, the building was richly decorated and is believed to have been the largest temple in the city before the construction of the Hagia Sophia.[3] Its design was introduced. the large-scale use of Sassanid Persian decorative elements and is believed to have inaugurated the new type of domed basilica architecture, later perfected in the Hagia Sophia.[4][5] Little is known of the history of the church after its construction; the building survived until the 11th century, after which it fell into decay. Various architectural elements were removed and reused in Constantinople and other cities. After other buildings were built on its ruins during the Ottoman period, the site was rediscovered during excavations in the 1960s. open to the public, even though the sculptures were moved to the Istanbul Archaeological Museum.

The church was built between 524 and 527, during the reign of Justin I, commissioned by Anicia Juliana,[1][2] a woman of noble origin, daughter of Anicio Olibrio and his wife Placidia, who was a descendant of various western emperors.[6] It was intended to replace an ancient temple built by Eudocia, wife of Theodosius II and great-grandmother of Juliana, to house the skull of Saint Polyeuctus.[1][2] It is believed that at the time it was the largest in Constantinople, before Justinian I, Justin's nephew and heir, had the church of Hagia Sophia built.[3] In a 76-line laudatory epigram, inscribed on the church walls and preserved in its entirety (Anthologia Graeca, I.10), Juliana compares herself to the emperors Constantine I and Theodosius II as a monumental builder and claims to have surpassed the Temple of Solomon, on whose proportions the new church was apparently based. The building constituted a direct challenge to the prestige and authority of the reigning dynasty, which was not of noble origin, and may have been one of the reasons for the large-scale reconstruction of the Hagia Sophia carried out by Justinian a few years later. late.[7] In light of this rivalry, it is perhaps no coincidence that, according to tradition, when Justinian saw the completion of the Hagia Sophia, he cried out, "Solomon, I have surpassed you."[8] ] However, the importance of the allusions to Solomon is disputed by some scholars, who see the church more as an affirmation of the imperial prestige of the ancient Roman aristocracy, from which Juliana descended, and of Chalcedonian orthodoxy, than this he had advocated during the reign of the Monophysite emperor Anastasius I.[9] Another aspect of Justinian's antagonism is evidenced in a story recorded by Gregory of Tours: shortly after his accession to the throne, Justinian asked the aged Julia na to contribute a portion of her great fortune to the state treasury. After buying some time, Juliana had her gold melted down and turned into plates with which the interior of the ceiling of the newly built church of St. Polyeuctus was adorned, thus preserving it from the emperor's greed.[10] The church survived until the 11th century, when it was abandoned. Later it was looted by the Byzantines themselves and later by the Crusaders in what was called the sack of Constantinople in 1204, during the looting sculptures and other architectural elements were taken