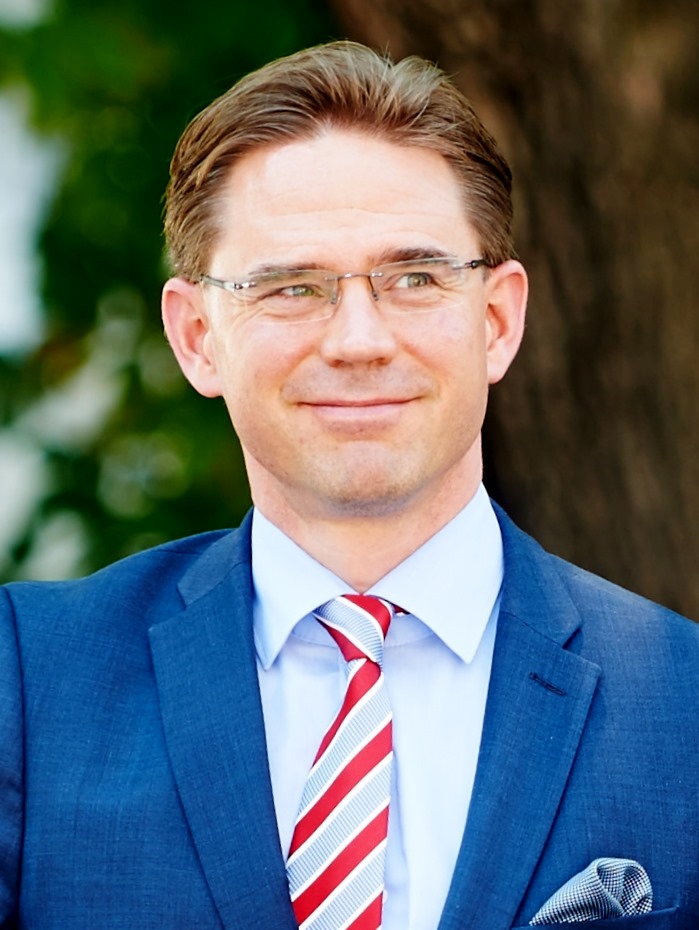 Jyrki Tapani Katainen (Siilinjärvi, October 14, 1971) is a Finnish politician, current Vice President of the European Commission. He previously he was leader of the National Coalition party from 2004 to 2014 and Prime Minister of Finland from 2011 to 2014. As the leader of the National Coalition, Katainen ran as the head of the list in the 2007 national elections, in which he came second. The politician was part of a coalition government chaired by the winner of the elections, Matti Vanhanen, in which he was appointed Minister of Economy. Katainen ran again in 2011, and won the parliamentary elections that year with 20.4% of the vote, thus becoming Prime Minister of Finland. [1]

Katainen's first contacts with politics took place while he was studying Social Sciences at the University of Tampere. At that time he joined the youths of the National Coalition, the conservative party of Finland. At the age of 24, he ran for the European Parliament elections, but was not elected and considered abandoning politics. [1] After the elections, he went to London to work in the Finnish embassy, ​​while combining it with his studies . [1] When he returned to Finland and graduated, the National Coalition convinced him to stand in the 1999 legislative elections. In those elections, Katainen obtained his first act of deputy at the age of 27. During his stage in opposition to the government, he stood out as one of the main faces of his party, and became his vice-presidency in 2001. Three years later, the National Coalition appointed him president. He also came to the attention of the European People's Party, where he served as vice president from 2003 to 2006. [1] Katainen ran for the first time as a candidate for Prime Minister of Finland in 2007. In his first attempt, he came in second with 22.26% of the votes and 50 seats, one less than the winner, the Center Party led by Matti Vanhanen. The Center Party formed a unity government with the National Coalition, and Jyrki Katainen was appointed Minister of the Economy. During his time in that portfolio, Katainen had to deal with the financial crisis of 2008 and the euro crisis in 2010. His country went into recession, so he had to take adjustment measures and cuts to get out of she. His work was recognized by the Financial Times newspaper as "the best" at the head of a finance ministry in the European Union. [1] Katainen ran again in the 2011 parliamentary elections as head of the list of the National Coalition, and this time his party won with 20.4% of the votes and 44 seats, two more than the Social Democratic Party of Finland. [2] That year he was appointed Prime Minister, forming a coalition government with five more parties. [3] In June 2014 he resigned as Finnish Prime Minister, with a view to starting his political career in the European Union. [4] Since November 1, 2014 he is Vice-President of the European Commission and European Commissioner for Employment Promotion in the Commission Juncker.

Katainen is the chairman of the National Coalition, a conservative party that is part of the European People's Party. During his tenure as Finance Minister, he took liberal measures to revive the Finnish economy, which went into recession during the 2008 financial crisis. In the 2011 elections, he promised to raise the retirement age, lower taxes on companies to encourage the creation of employment, and supporting nuclear energy. [5]