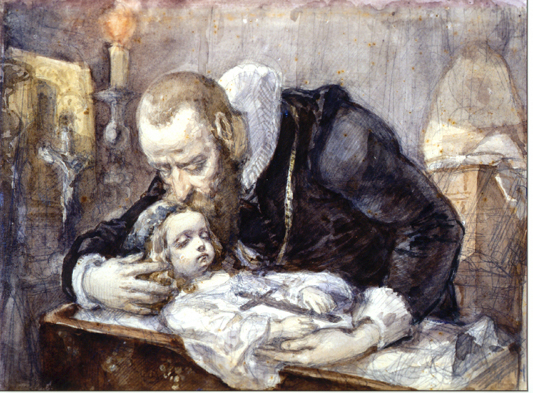 Lament or lamentation [2] is the expression of a strongly negative human feeling (pain, grief, [3] grief, sadness, guilt, shame, nostalgia) that is artistically reflected in a passionate way. It can come from mourning a loss (death, heartbreak, estrangement from being or from the beloved land), or from repentance. It is given as a subject both in literature (especially in poetry) [4] and in music and the plastic arts. With the term song ("sad song" for lamentations) both poetry without music and musical pieces with lyrics are designated: originally lyrical poetry was that which was sung accompanied by musical instruments (such as the lyre or, in the case of funeral songs, Greek aulos or other types of wind instruments). Both in written literature and in oral traditions, both ancient and modern, lament is often put on the lips of women, [5] who in almost all cultures have been entrusted with the role of mourners (who physically express wailing with tears, sighs, groans, groans, screams and gestures of distress and despair, including self-harm). The lament put in the mouth of men is also very frequent, although it is still pointed out how incompatible this lament with the imperturbability that is assumed to the stereotype of the masculine condition. Thus, the mother of Boabdil the Boy reproached her son: she cries as a woman what you did not know how to defend as a man; when he stopped (supposedly in the place now known as Suspiro del Moro) to contemplate for the last time his lost palace of the Alhambra in Granada.

Many of the oldest poems are laments. [9] In Greco-Roman culture they appear from the Iliad [10] and the Odyssey. [11] Initially, the epitaph (from the Greek epitaphios - "around the grave" - ) were the verses that were cited in honor of the deceased on the day of their funeral and were repeated annually (then they went on to be inscribed on the tombstones). The treno (from the Greek thrênos - "lament" -) was a composition of the archaic Greek lyric, a funeral lament intended to be performed by a choir with musical accompaniment; It was sung in the absence of the dead, unlike the epicedios, poems that were otherwise closely related. Both were addressed to the dead, while the consolatio was sung to the living, to alleviate their suffering. [12] Elegies (from elegos - "lament" -, a probably pre-Hellenic word) were also sung accompanied by the aulos in classical and Hellenistic Greece; [13] while in the Athenian tragedy the kommos was sung ("to beat oneself" -chest and head in a sign of mourning -) [14] a lyrical song of lament performed at the same time by the choir and a character (such as Xerxes 'lament at the end of Aeschylus's Persians, Antigone's final appearance in Sophocles' homonymous tragedy, Oedipus, having blinded himself, in Oedipus Rex, by Sophocles himself, and the episode after the death of Clytemnestra in Euripides' Electra). [15] The nenia was a Latin funeral song (carmen funebre), in praise of the dead, which was sung at the funeral by the mourners, while Nenia was the Roman goddess of those songs. There are laments in poetry of all cultures: in the Beowulf, [17] in the Hindu Vedas, in the Jewish Tanakh (included in the Old Testament of the Christian Bible - Book of Psalms, Book of Lamentations, attributed to Jeremiah -) and in other religious texts of the Ancient Near East, such as the Lamentations of Ur (Mesopotamia) or the Lamentations of Ipuur (Egypt). Biblical laments have been interpreted as a cry of need in a context of crisis, in which Israel lacks resources on its own [18] or a simple call for divine help in times of trouble. [19] They tend to share. format: an appeal to God, with the description