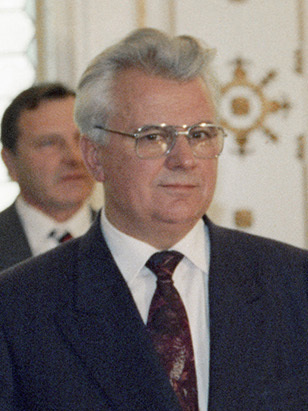 Leonid Makárovych Kravchuk (Ukrainian: Леонід Макарович Кравчук) (January 10, 1934, Velyky Zhytyn – May 10, 2022, kyiv)[1] was a Ukrainian politician. Member of the Communist Party and president of the Supreme Soviet (therefore, head of state of the republic) between 1990 and 1991. He was one of the signatories of the Belavezha Treaty that determined the dissolution of the USSR in 1991. He was the first President of Ukraine between 1991 and 1994. That year, early presidential elections were held, in which he was defeated by Leonid Kuchma. His political creed is to avoid conflict and be direct in stating his position. He is widely considered skillful, cautious, and diplomatic. This type of diplomacy allowed Kravchuk to maintain his power and strength over Ukraine during the transition to independence. Before the collapse of the Soviet Union, he was 3rd in the Ukrainian Party hierarchy, despite not being a member of the ruling Dnipropetrovsk group. During his tenure, he eschewed uncompromising stances towards democratic change, and was a figure who sought compromise from both the Liberal and Conservative parties. This leads him to be considered the true architect of Ukrainian independence. After becoming president of a free Ukraine, Kravchuk tried with relative success to strengthen the country's sovereignty and develop its relations with the West. He resisted enormous pressure from the Russian Federation and rejected proposals for the creation of an Armed Forces and Monetary Union of the Commonwealth of Independent States. Another of his achievements is the eradication of nuclear weapons from Ukrainian soil.

He was born in Velyky Zhytyn (now Rivne Oblast), which was part of the Second Polish Republic at the time of his birth, on January 10, 1934, but the territory was annexed by the Soviet Union to the Ukrainian SSR after World War II. World. He studied at the University of kyiv and graduated in 1958. He joined the Communist Party of Ukraine in 1958 and quickly rose through the party (especially in the Agriculture and Propaganda section). He became a member of the Ukrainian Politburo in 1989 and Chairman of the Verkhovna Rada in 1990. With the weakening of the Soviet Union, Kravchuk became the effective leader of Ukraine. He left the Communist Party of the Soviet Union in August 1991, and began to support the Ukrainian independence cause. His full support for independence came after the failed coup against Gorbachev in August 1991. Following Ukraine's Declaration of State Sovereignty, he was appointed interim head of state pending presidential elections.

On December 1, 1991, just over three weeks before the formal dissolution of the Soviet Union, the first presidential elections in Ukraine were held, which also constituted the second democratic electoral process in Ukrainian history. At the same time, a referendum was held to formalize the independence of the country, which was approved with 92.30% of the votes.[2] With a participation of 84%, having received more than 19 million votes (61.59%), Kravchuk was elected the first President of Ukraine for a five-year term, being formally sworn in on December 5.[2] Vitold Fokin was appointed Prime Minister by the Verkhovna Rada. On December 21, 1991, he participated in the signing of the Belavezha Treaty that led to the formation of the Commonwealth of Independent States. The new government was not legitimized by the Government of the Ukrainian People's Republic in exile (former Ukrainian state absorbed by the Soviet Union in 1920), until several months later, on August 22, 1992, when Kravchuk received the succession of government. for