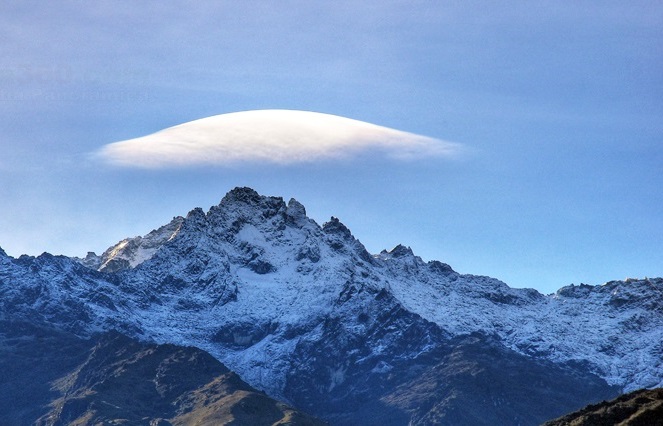 Bolívar Peak is the highest geographical feature in Venezuela, with an official altitude of 5007 m above sea level. n. m.[1]​[2]​ It is part of a set of peaks located in Sierra Nevada within the homonymous national park in the Mérida mountain range (Merida State). Together with the sister peaks: Humboldt and Bonpland they form the main peaks of the Venezuelan Andes mountain range. It receives its name in honor of the Venezuelan Liberator Simón Bolívar. On April 19, 1951, a bronze bust of the Liberator was unveiled at the top of the peak, the work of the painter and sculptor Marcos León Mariño.[3]

The peak has received at least four different names throughout history, the name by which it was known for the first time was "La Columna Peak",[4] a name that was also used interchangeably with the names of «Shell» and «Peineta». On March 18, 1925, at the proposal of Dr. Tulio Febres Cordero and Juan Rodríguez Suárez, the name was changed to "Bolívar Peak" in honor of the Liberator of Gran Colombia, Simón Bolívar.[5] The official baptism with the new denomination it was carried out on December 30, 1934, in a ceremony at the foot of the monument of La Columna and with water from the Chama River.[6] However, both the name "Pico Bolívar" and "Pico La Columna» were maintained until the mid-1950s, when some impressions of the physical-political map of the United States of Venezuela were published, pointing to the peak with both toponyms. Currently, the name "La Columna" is used to refer to the massif that contains the Bolívar peak, as well as other important elevations such as the El León peak of 4743 m a.s.l. n. m. and the El Toro peak of 4750 m a.s.l. n. m., while the name "Concha" is used to refer to another peak located in the same mountain range which was previously referred to as "La Garza".

The Bolívar peak is part of the Venezuelan Andes, which derive from the Eastern Cordillera of Colombia at the level of the El Tamá national park and its El Cobre hill (3613 meters), south of the Táchira State. This imposing mountain formation continues to the northwest between the Torbes and Uribante rivers at the level of El Púlpito Peak (3,942 meters) and the extensive Páramo del Batallón. At this point, it penetrates the state of Mérida, forming the Sierra Nevada de Mérida, separated from the Ramal del Uribante by the Nuestra Señora River. It is in the heart of the Sierra Nevada de Mérida that the Bolívar peak is located.

Despite being the highest peak in the country, Bolívar Peak was not the main interest of hikers until well into the 20th century. This was due to the fact that previously, due to the view from Mérida, it was considered that Pico Toro (located in the same Sierra Nevada) had a higher altitude and therefore meant a greater challenge. The first known attempt to climb Bolívar Peak dates back to 1897, when José Trinidad Nieto, Víctor Moreno, Pedro Moreno, J. Eladio Altuve, Medardo Nieto accompanied by other people unsuccessfully attempted to climb the peak. Later, in 1922 an unsuccessful attempt to climb Pico Bolívar, the Swiss geologist Moritz Blumenthal was the first to step on the Timoncitos glacier that was located south of Pico Bolívar. The first successful ascent to the Bolívar peak was made by Enrique Bourgoin, a pharmacist from Mérida, and Heriberto Márquez Molina, from Tovar, accompanied by the guide Domingo Guzmán Peña Saavedra, who reached the top of the peak through the gorge of the now-extinct Timoncito glacier, the January 5, 1935. They were the first to step on the highest peak in Venezuela. The first Venezuelan woman to climb Pico Bolívar on February 7, 1946, was Blanca Josefina Carrillo de Ponte (now deceased).

The recognition of the height of the Bolívar peak began with