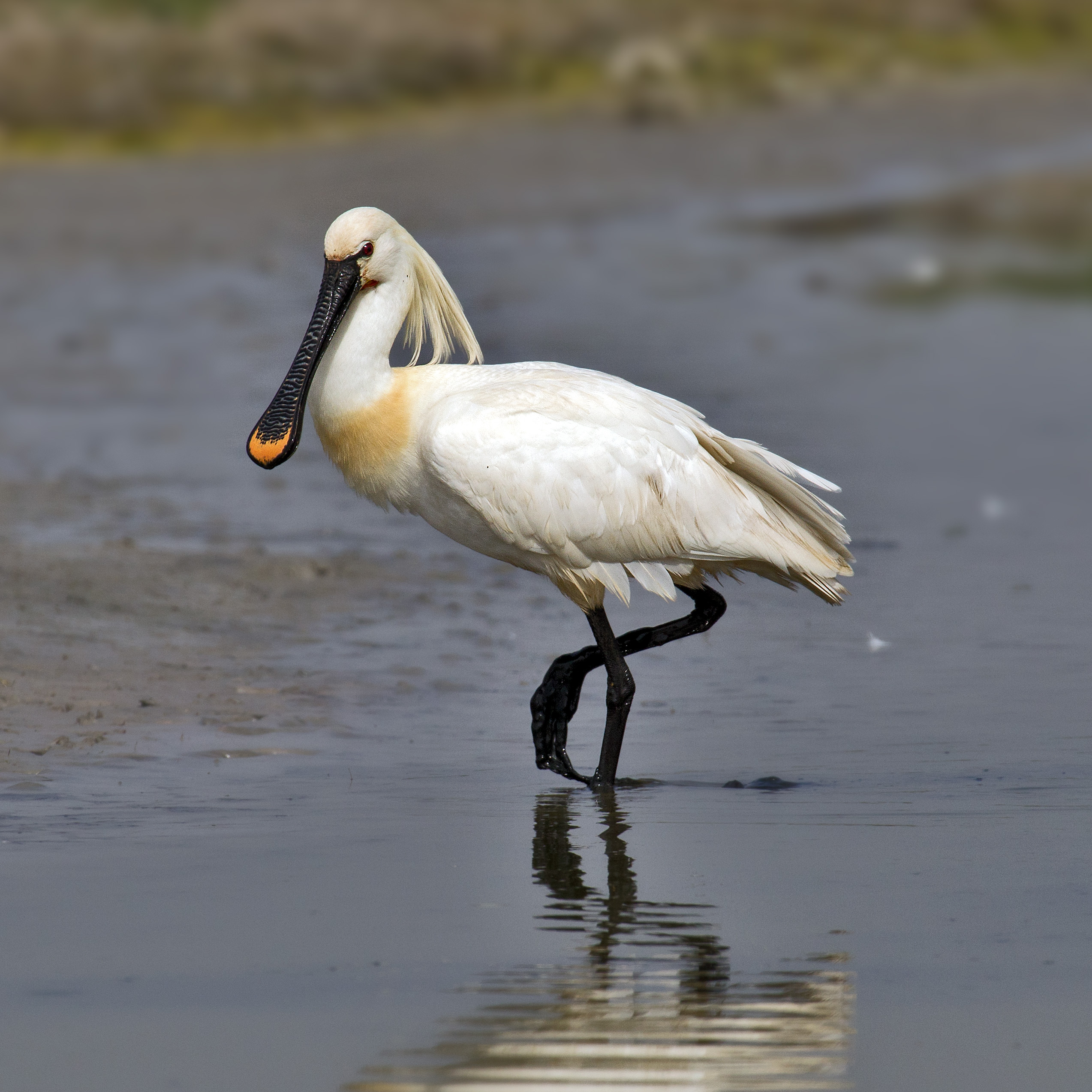 The Eurasian Spoonbill (Platalea leucorodia)[2] is a species of pelecaniform bird in the Threskiornithidae family,[3][4] typical of Eurasia and Africa. It is a large wading aquatic bird, with mainly white plumage, characterized by the shape of its beak: long and flattened with a blunt flare at the tip, to which it owes its current common name. However, during the Middle Ages and the Renaissance it was known by the name of averramía.[5]

The spoonbill is a large wading bird, measuring between 80 and 93 cm in length and with a wingspan of between 120 and 135 cm.[6] Its plumage is almost entirely white, although adults have a golden patch at the base of the neck during the breeding season, and young individuals have black feathers on the tips of their wings. It has a tuft on the nape, more prominent in the breeding season. It is characterized by its long, flat, broad-tipped bill, black with a yellow spot on the tip in adults. On the other hand, the juveniles have a grayish bill, and the chicks are pinkish-orange. The legs of the spoonbills are black, and in flight they are seen extended backwards.

The common spoonbill is classified with all other species of spoonbills in the genus Platalea, belonging to the family Threskiornithidae.[4] The family Threskiornithidae is made up of two subfamilies: the subfamily of spoonbills (Plateinae) and that of ibises ( Threskiornithinae). [7] In turn, the family Threskiornithidae is classified in the order Pelecaniformes, along with four other families of waterfowl: Pelecanidae (pelicans), Ardeidae (herons), Balaenicipitidae (shoebill) and Scopidae (hammerhead bird). .[8] Spoonbills are wading birds with long, flat and spatulate beaks, which they use to fish in shallow waters. The spoonbill was scientifically described by Carlos Linnaeus in 1758 in the tenth edition of his work Systema naturae, with the same name as today, Platalea leucorodia,[9] The name of the genus, Platalea, is the name of this bird in Latin, which in turn comes from the Greek πλατύς (platus) which means "wide, flat" , in relation to its beak.[10] For its part, its specific name, leucorodia, comes from the combination of the Greek terms λευκός (leukos) "white" and ερωδιός (erodios) "heron".[11] Three subspecies of spoonbill are recognized:[12][4] Platalea leucorodia leucorodia Linnaeus, 1758 – breeds in wetlands of Europe and most of temperate Asia; Platalea leucorodia balsaci Naurois & Roux, 1974 - inhabits western Mauritania; Platalea leucorodia archeri Neumann, 1928 – breeds along the Red Sea and Somalia coasts. The species most closely related to the spoonbill are the royal spoonbill (Platalea regia) and the lesser spoonbill (Platalea minor).[13]

It is a palearctic species with a wide distribution. It breeds from Spain and the United Kingdom to Japan. It also breeds in some areas of North Africa. In Europe there are only populations of considerable size in Holland, Spain, Austria, Hungary and Greece and the Caucasus,[14] but the majority extends through the temperate zones of Asia. Most populations migrate in winter to tropical and subtropical areas. Spoonbills that breed in Europe travel primarily to Africa, to wetlands in areas just south of the Sahara; although a large number of these birds spend the winter in the estuaries of the Souss and Massa rivers, in Morocco, and some stay in the warmer areas of their breeding areas. Asian populations, on the other hand, spend the winter mainly in the Indian subcontinent and southern China. In Spain it is possible to see the migratory passage of the European population towards Africa through the migratory corridor "Playa de la Barrosa-C