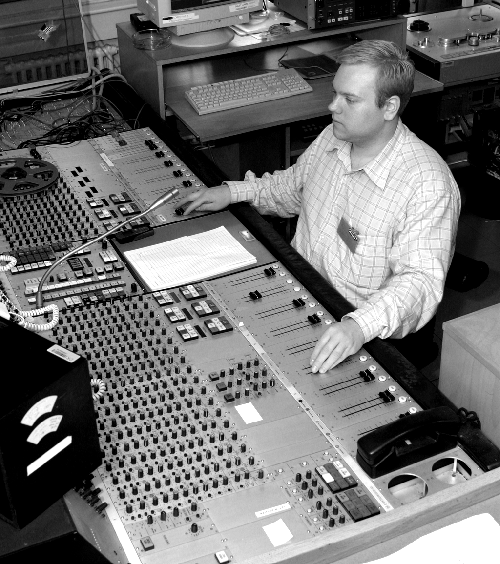 In the music industry, a record producer (not to be confused with a music producer) performs a variety of roles, including managing recording sessions, assisting music novices, instructing and guiding musical performers through the recording process, critiquing the ideas of the project, direct creativity, supervise recording, mixing, and perform the mastering process. These have been some of the main functions of producers since the inception of sound recording, but in the second half of the 20th century producers have taken on a larger business role.[1] On the other hand, the music producer is dedicated only to the composition, arrangements, recording and post-production of songs, electronic productions, "beats" and any other type of musical creation. It is not necessary for a music producer to have the skills to artistically direct the career of a music artist or the production of an entire album, as these are primary tasks of the record producer. In the music industry there are two kinds of producers: the executive producer and the music producer. These have different roles; while the executive producer is financially responsible for the project, the music producer is responsible for the music for the public.[2]

In the first half of the 20th century, the role of the record producer was comparable to that of a film producer, because the record producer organized and supervised recording sessions, paid technicians, musicians, and arrangers, and sometimes chose material for recording. artist. In the fifties this role was played by A&R (artist and repertoire) directors. Among the most prominent was musician and songwriter Mitch Miller at Columbia Records. Until the 1960s, several producers and A&R directors were contracted by the major record labels, and several recordings were made in studios controlled and operated by them, such as the famous Abbey Road studios in London, controlled by EMI. In the second half of the 1960s, a new category emerged: that of independent producers. Early independent producers included Leiber & Stoller, Wall of Sound creator Phil Spector, and British studio pioneer Joe Meek. This change was facilitated by the introduction of high-fidelity magnetic tape recording technology, which greatly altered the processes and economics of music recording. Magnetic tape enabled the establishment of independent recording studios in large recording centers such as Los Angeles, London, and New York. Unlike the old studios, which were akin to a "closed shop," these new studios could be used by any artist not associated with the major record labels. The largest studios were typically established and operated by top recording engineers. These were carefully constructed to create optimal recording conditions, and were equipped with the latest recording equipment and high-quality microphones, as well as electronic amplifiers and musical instruments. Major studios like Olympic Studios in London or United Western Recorders in Los Angeles quickly became the most sought-after recording venues in the world. These "hit factories" would go on to produce some of the most successful pop recordings of the rest of the century.

With the easy access to technology today, it is very easy for a producer to achieve high quality tracks without the use of any instruments; this is very usual in rap. In many cases, the person who performs the production also works as an arranger, musical composer or performer. The music producer can