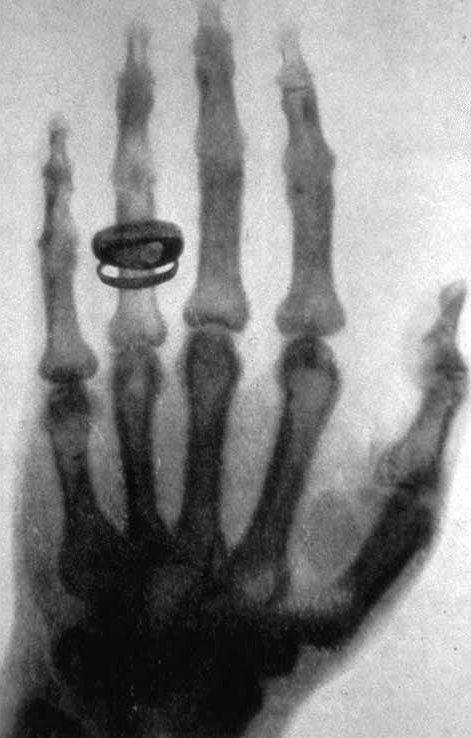 The name X-rays designates an ionizing electromagnetic radiation, invisible to the human eye, capable of passing through opaque bodies and printing photographic film. Its ability to penetrate matter is greater the higher the voltage, the lower the density of the matter and the lower the average atomic number of said matter crossed. Current digital systems allow obtaining and viewing the radiographic image directly on a computer (computer) without the need to print it. The wavelength is between 10 and 0.01 nanometers, corresponding to frequencies in the range of 30 to 30,000 PHz (50 to 50,000 times the frequency of visible light).

X-rays are corpuscular radiation of the same nature as radio waves, microwave waves, infrared rays, visible light, ultraviolet rays and gamma rays. The fundamental difference with gamma rays is their origin: gamma rays are radiation of nuclear origin that are produced by the deexcitation of a nucleon from one excited level to another of lower energy and in the disintegration of radioactive isotopes, while X-rays they arise from extranuclear phenomena, at the level of the electronic orbit, fundamentally produced by deceleration of electrons. The energy of X-rays generally lies between ultraviolet radiation and naturally produced gamma rays. X-rays are ionizing radiation because when they interact with matter they produce the ionization of its atoms, that is, they originate charged particles (ions).

The history of X-rays begins with the experiments of the British scientist William Crookes, who in the 19th century investigated the effects of certain gases by applying discharges of energy to them. These experiments were developed in an empty tube, and electrodes to generate high voltage currents. He called it Crookes tube. This tube, being close to photographic plates, generated in them some blurred images. Nikola Tesla, in 1887, began to study this effect created by Crookes tubes. One of the consequences of his research was to warn the scientific community of the danger to biological organisms posed by exposure to these radiations. The German physicist Wilhelm Conrad Röntgen discovered X-rays in 1895, while experimenting with tubes of Hittorff-Crookes and the Ruhmkorff coil to investigate the violet fluorescence produced by cathode rays. After covering the tube with black cardboard to eliminate visible light, he observed a faint yellow-green glow from a platinum-barium cyanide-coated screen, which disappeared when the tube was turned off. He determined that the rays created highly penetrating but invisible radiation that penetrated great thicknesses of paper and even low-density metals. He used photographic plates to show that objects were more or less transparent to X-rays depending on their thickness and made the first human X-ray, using his wife's hand. He called them "unknown rays" or "X-rays" because he didn't know what they were, only that they were generated by cathode rays hitting certain materials. Despite subsequent discoveries about the nature of the phenomenon, it was decided that they should retain that name.[1] In Central and Eastern Europe, lightning is called Röntgen lightning (German: Röntgenstrahlen). The news of the discovery of X-rays spread very quickly in the world. Röntgen was the object of multiple recognitions: he was awarded the Order of the Crown by Emperor Wilhelm II of Germany and was awarded the Rumford Medal of the Royal Society of London in 1896, the Barnard Medal of Columbia University and the Nobel Prize. of Physics in 1901.