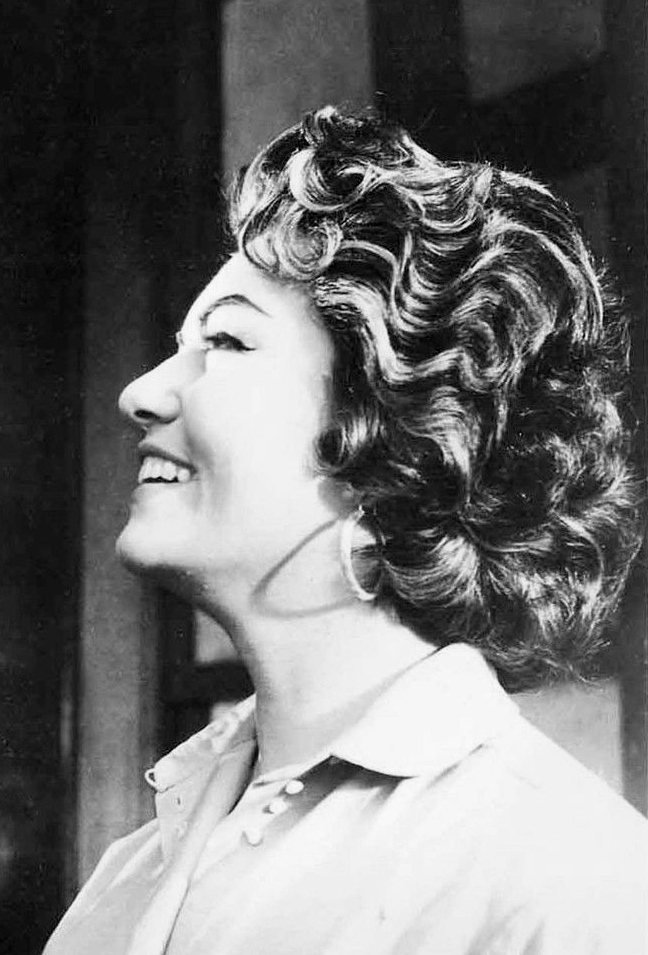 María Victoria Ledesma Cuevas (Encarnación de Díaz, Jalisco, May 30, 1932-Mexico City, August 1, 2022), artistically known as Rosa de Castilla, was a Mexican singer and actress nominated for the Ariel Award of the Mexican Academy of Cinematographic Arts and Sciences in 1954, belonging to the so-called Golden Age of Mexican cinema. Pioneer of musical television in Mexico, Rosa de Castilla is one of the great interpreters of Mexican music of the twentieth century. She triumphed on the radio and left her voice recorded on dozens of records with the companies Columbia, Musart, RCA Víctor and Orfeón. Some of his hits are "Goodbye, canoe", "The arrow", "Maldito abyss", "Ayes de amor en el río", "Paloma patitas blanca", "Half-hearted love", "The law of the mountain" and " With a broken soul. She toured the entire world on her tours, and even sang in Israel.[1] In the movies, she was one of the most beautiful female stars of the 1950s and 1960s, and is remembered as one of the folk stars of the golden age of Mexican cinema, for her starring roles in ranchera comedies. He made films with actors like Jorge Negrete, Pedro Armendáriz, Luis Aguilar, Joaquín Cordero, Antonio Aguilar, Fernando Casanova, Demetrio González, José Venegas "El Bronco" and Miguel Aceves Mejía, and with comedians like Tin Tan, Resortes, Manolín and Shilinsky, Clavillazo and El Piporro, among others. Among his best-known films are The three cheerful compadres (1952), Hot Rumba (1952), Such for which (1953), The unknown mariachi (1953), Sandunga for three (1954), Las nenas del 7 (1955), Tierra of men (1956), Here are the Aguilares! (1957), I... the adventurer (1959), Two hearts and a sky (1959), My grandmothers... no more! (1961) and Hero to the force (1964).

She was born in Encarnación de Díaz, Jalisco, the daughter of Salvador Ledesma Márquez[2] and María de la Luz Cuevas Cuéllar (died March 6, 1991),[3] who had eight children of whom four survived: Luis , Javier, Liduvina and Maria Victoria. From a very young age she lived in Cañada Honda, Aguascalientes, and later moved with her family to the city of Aguascalientes, for which she is very identified with that city, and it was there that she began her career at the age of 14, appearing with great success at the Río Rosa nightclub. She spent little time and decided to try her luck in Mexico City, where she made her radio debut on the XEX station, "La Voz de México". In his book My memories of almost a century of radio in Mexico, the announcer Gonzalo Castellot wrote: In Mexico City she was also booked to perform for a month at the then very popular Waikikí nightclub, with such success that she extended her season for another two years. During her season in Waikikí, producer Raúl de Anda "El Charro Negro" invited her to participate as an actress in the films El lobo solo, La justicia del lobo and Vuelve el lobo, filmed in 1951 with Dagoberto Rodríguez and Flor Silvestre in star roles. Shortly after, the production house Mier y Brooks hired her exclusively for five years. The artistic name Rosa de Castilla arose because at that time another Mexican singer who called herself María Victoria was at her peak, so the legal delegate of ANDA suggested to the actress that she not use her real name but choose other name. She recorded her first albums in the early fifties. He began with the Columbia label, recording some 78-rpm singles with songs like "I will not return", "El besito", "Piedra con coyol", "Goodbye, canoe", "Hate me if you want" and "What will it be?" ?». These recordings are her first hits; Okeh, Columbia's subsidiary label, included the song "Goodbye, Canoe" on the compilation album Twelve Song Stars. however