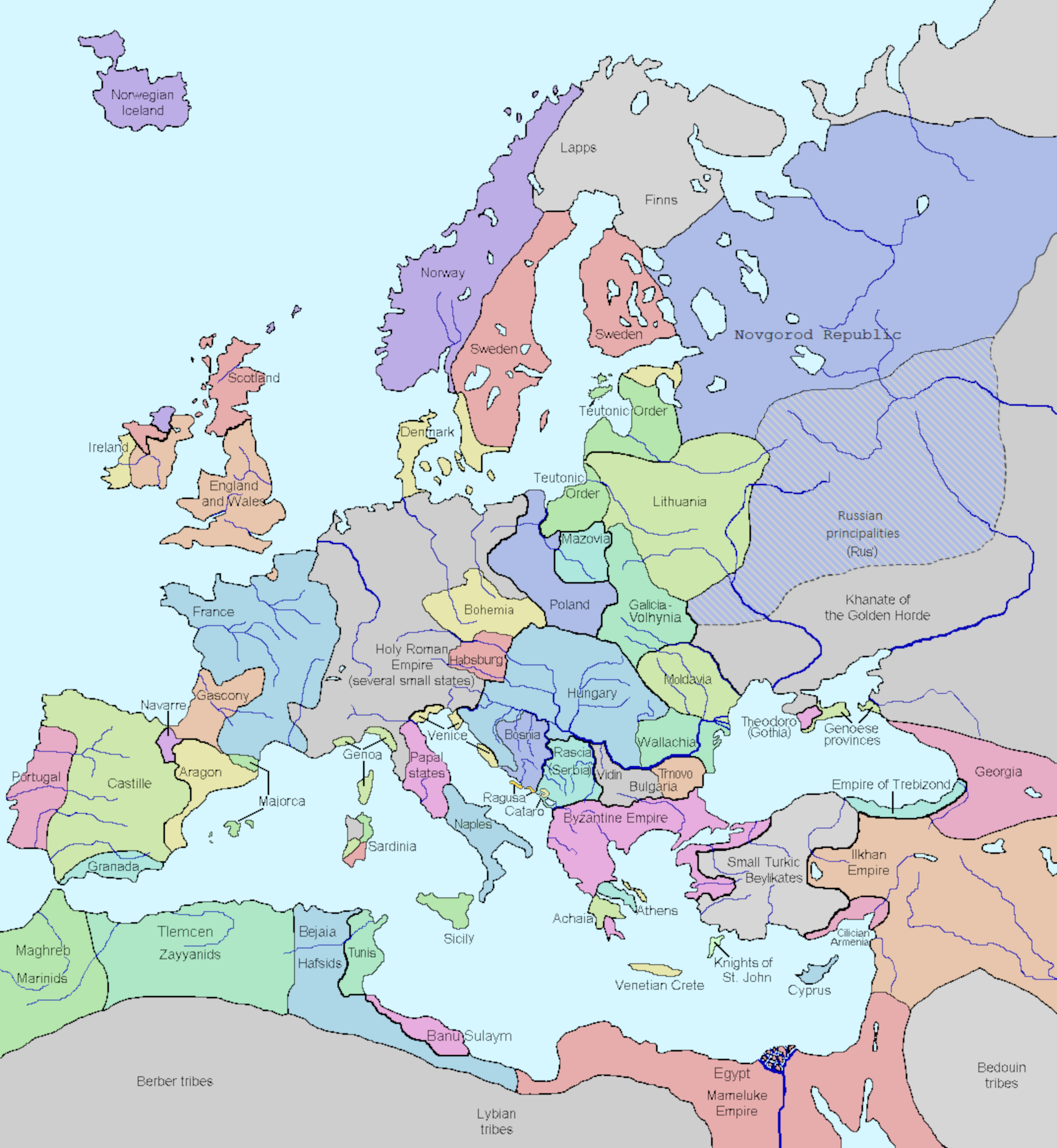 The 14th century AD. C. (fourteenth century after Christ) or fourteenth century e. c. (14th century CE) began on January 1, 1301 and ended on December 31, 1400. It is known as the "Age of Plague." It is undoubtedly one of the most dire in the history of mankind, the century is marked by serious plagues and wars that devastated almost all of Europe. Between 1315 and 1317 there was the so-called Little Ice Age that ended with thousands of crops causing misery and famines. In the middle of the century, between 1348 and 1355 there was an outbreak of plague, in its bubonic, pneumonic and septicemic variants, called the "black plague", which wiped out a third of the European population. The death of the last king of the Capetian dynasty in France, caused a European conflict for the succession, the French crowned Felipe VI de Valois, first cousin of the late King Capetine. But the other pretenders to the throne rose. Edward III, King of England and legitimate pretender to the French throne, initiated hostilities with France, beginning the Hundred Years War, one of the longest in the history of mankind. In the rest of Europe conflicts would continue: in Castile there was a civil war for the throne, between Pedro I of Castile, nicknamed El Cruel, against his half-brother Enrique de Trastámara, the conflict between England and France moved to Castile. On the other hand, the Ottoman Empire will continue to expand mainly through the Balkans, although an already greatly reduced Byzantine Empire will still resist the Ottoman onslaught. In Asia, Tamerlane or Timur, established the Empire of Timurid, an important Islamic territory in the Middle East and Central Asia and the third largest empire in history that has never been established by a single victor, similar to the Mongol Empire of his predecessor Genghis. Khan. Scholars estimate that Timur's military campaigns caused the deaths of 17 million people, representing about 5% of the world's population at the time. In India the Sultanate of Bengal was founded, one of the main trading nations in the world, described by Europeans as the richest country to trade with, after its independence from the Sultanate of Delhi. The Mongols were driven out of China and retreated to Mongolia, the Ilkhanate collapsed, the Chaghatayid dissolved and split into two parts, and the Golden Horde lost its position as a great power in Eastern Europe. In Africa, the wealthy Mali Empire, a world leader in gold production, reached its territorial and economic peak under the reign of Mansa Musa I of Mali, the richest individual in medieval times, and according to various sources in history.

1322: The reunification of Poland occurs under the reign of Vladislaus I. 1328: With the death of Carlos IV of France the capet dynasty is ended. 1335: With the death of Abu Said Bahador Khan, the Ilkhanate, the Mongol government established in Persia, is fragmented. 1336: The Vijayanagara Empire is founded in southern India. 1337: In France the Hundred Years War begins, with the claim of the English King Edward III to the French crown. Emergence of the Black Death in Asia. 1340: The English fleet defeats the French at the Battle of Sluys. 1340-1396: The Bulgarian-Ottoman wars occur. 1346: The French are defeated at the Battle of Crécy by the English, in the first great battle of the Hundred Years' War. 1347: The Black Death reaches Messina, Sicily, and rapidly spreads throughout Europe 1351-1369: The First Castilian Civil War breaks out, between Pedro I and Enrique de Trastámara, the first supported by England and the second by France. 1356: The English defeat the French at the Battle of Poitiers where King John II himself is taken prisoner. 13