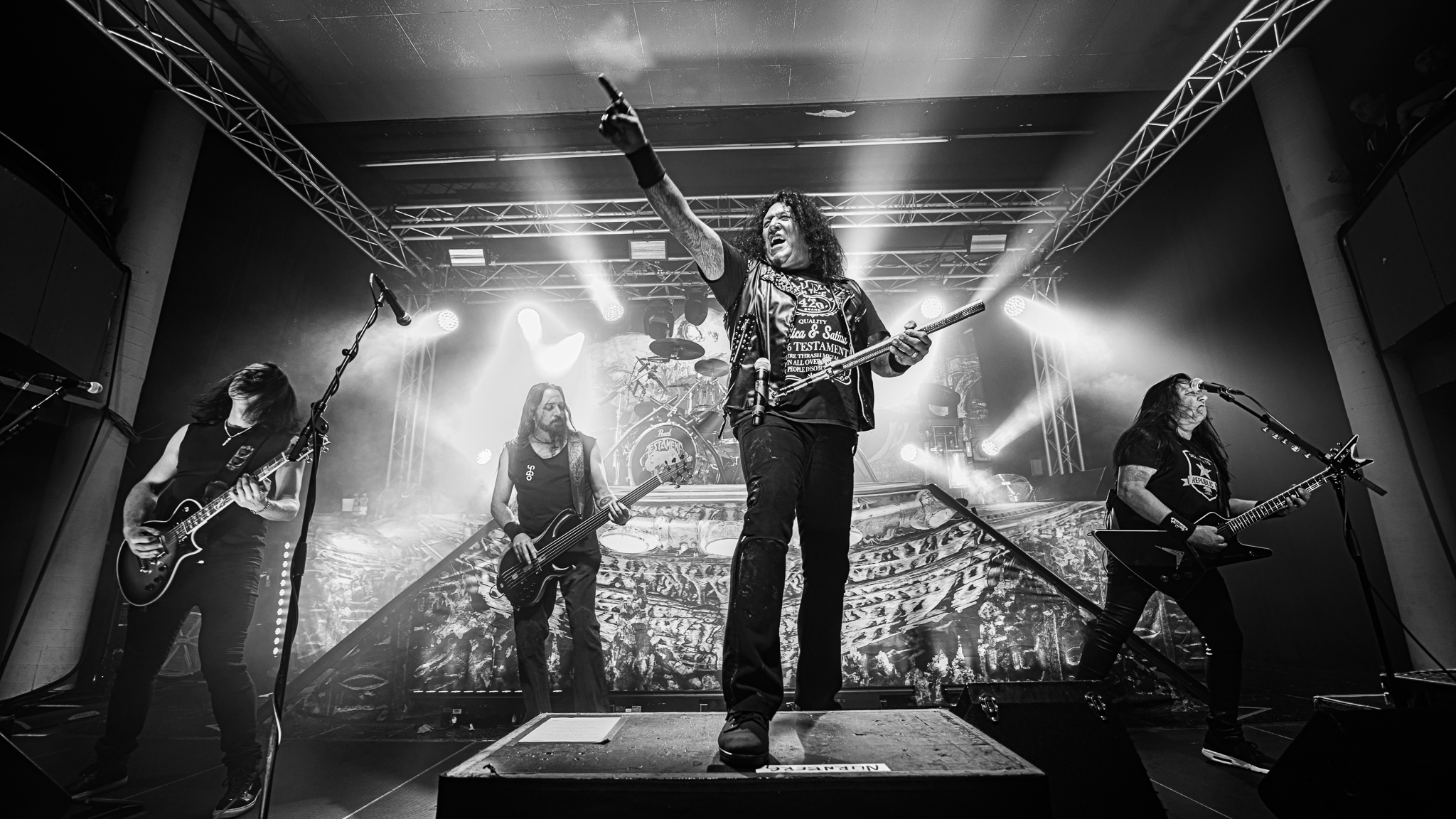 Testament (stylized TestAmenT) is an American thrash metal band from Berkeley, California. To date they have released twelve studio albums, four live albums and six compilation albums, they have three albums that entered the top-50 in the English charts and in 1999 with the album The Gathering they entered the top-50 in Germany. After almost two decades without releasing a studio album since then, they chained four between 2008 and 2020, all of which reached the top 100 of the Billboard 200 (with Dark Roots of Earth reaching the best position, 12th place).[1] Together with the Big Four, the German Big Four, Exodus, Overkill and Death Angel, Testament is considered one of the most relevant and influential bands in the history of thrash metal, the most common explanation for not being included among the first mentioned being the fact that that their debut album was somewhat late (1987) compared to that of the other four bands (1983-1985).[2]

Testament was formed in San Francisco, United States in 1982 by guitarist Eric Peterson and his cousin, also a guitarist, Derrick Ramírez; although with the initial name of Legacy. The group was then joined by bassist Greg Christian, drummer Mike Ronchette, and singer Steve Souza. Ramírez was also replaced by young guitarist Alex Skolnick, who had studied with Bay Area guitarist Joe Satriani, with this lineup they released their first demo in 1985 with four songs. After the recording the drummer, Ronchette, left the line-up and was replaced by Louie Clemente. The band was looking for some record label attention, but they were dealt a severe blow when Souza suddenly left to join Exodus; him being replaced by Chuck Billy. With this line-up they recorded their first album, but the band was forced to change their name because "The Legacy" was already a trademark of a jazz band. Their first album, The Legacy, was released in 1987 on Megaforce Records. It's a concise, technical record that launched them to fame and into mainstream thrash circles starting to draw comparisons to Bay Area pioneers Metallica. The record was immediately hailed as a classic with its raging riffs and harmonic sensibilities. They quickly achieved fame and success with a tour of America and Europe, with Anthrax, Slaughter and Satan, where Live at Eindhoven would be recorded. His second work was released in 1988, The New Order, and that maintains the same line as the previous album. They toured again and on the way back they recorded Practice What You Preach in 1989, which would be the band's most popular and would be a success that they would never equal thanks to a massive achievement that saw them expand their melodic reaches without losing any of their power. and aggression. Afterwards they went on tour for a whole year, and even for a long period they were headliners in which respected bands like Savatage, Dokken and Wrathchild were also present in the United States. They were offered the chance to perform alongside Judas Priest on the Painkiller tour along with Megadeth, Gamma Ray, ZZ Top and Loudness, but in 1990 Souls of Black came out, an album made up of a collection of songs that came from demos and unfinished ideas and which had respectable sales but mixed reviews. Despite everything, they got a place on the Clash Of The Titans tour, the apex of the 80's thrash metal movement, along with Slayer, Megadeth, and Anthrax and another video clip, Souls of Black, was released. Then they recorded the album The Ritual, more heavy metal than the previous ones but keeping the thrash roots.

Guitarist Skolnick, who had long complained about the creative limitations imposed by the band's style, was the first casualty, leaving to join Savatage. He was replaced by Glen Alvelais (ex Forbidden) for l