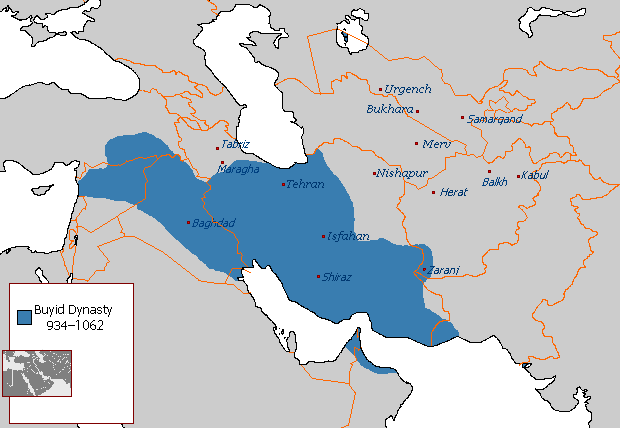 Al-Buwayh or Buyan (320-447 AH / 932-1055 AD) is an Iranian government of post-Islamic Shiite Dailami dynasties that ruled in the central, western and southern parts of Iran and Iraq and originated from Deilman in Lahijan, Gilan. The founder of this dynasty Ali, Hassan and Ahmad were the three sons of Dailami Buyeh, who were in the footsteps of Mardavij's corps and rose after him. Subsequent events showed that they were capable and energetic leaders. Ali, who was in control of Isfahan, marched south and captured Persia, while Hassan Jabal and Ahmad Kerman and Khuzestan were captured. Hassan entered Baghdad in 945 AD, advancing west. A year later, Mustaqafi overthrew the Abbasid caliph and replaced him with al-Muta'i. Thus began a period of 110 years of Buyan rule over the caliphate, which took 12 years for Buyan to establish. They adopted the title of Amir al-Amra, which was officially given to the Ba'athist rulers of Baghdad.

The most important source about the early rule of al-Buwayh is Ibn al-Muskawiyyah's "experiences." For the middle period of Al-Buwayh, "below the book of the experiences of the nations" by Abu Shuja Muhammad Ruzrawari and "History of Halal Al-Sabeeh" by Halal Ibn Mohsen Sabeeh He collected the treatises of 'Abd al-'Aziz ibn Yusuf al-Shirazi (Wazir al-Dawlah), the summary of the treatises of Abi Ishaq al-Sabeeh by Abu Ishaq Ibrahim ibn Halal al-Sabeeh, and the treatises of al-Sahib ibn Ibad by Abu al-Qasim Ismail Sahib ibn Ibad (the minister of Ma'id al-Dawlah). Other primary sources include Ibn Balkhi. Abu Bakr Muhammad ibn Yahya al-Suli, Akhbar al-Radhi, may God bless him and grant him peace, and the history of the Abbasid state from the years 332 to 333,

Descent and origin of Boeing

The Boeans were a descendant of the Dilmians and spoke a Persian language very similar to the Gilkan language. The land of the Boeing was Dilimestan or present-day Diliman located in Siahkal, Lahijan. There are different views among scholars and historians about the lineage of the Buwayhid dynasty. Buyeh is considered to be one of the sons of Yazdgerd III, the last Sassanid king, and it is said that at the beginning of the Muslim Arab invasion, some of the descendants of Yazdgerd went to Gilan and settled there; And in all Iranian Dilmians �