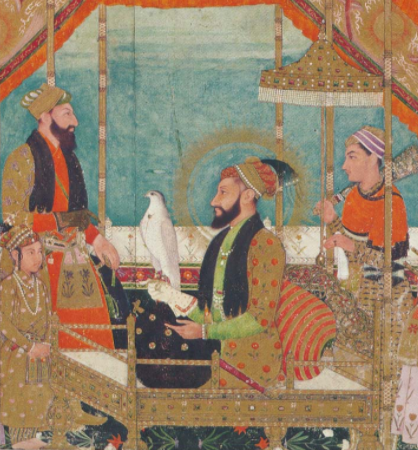 Aurangzeb the Universalist (November 3, 1618 - March 3, 1707), originally named Muhyiddin Muhammad, was the sixth Gurkha emperor of India to rule between 1067 and 1118 AH / 1658-1707 AD. Aurangzeb means the beautifier of Aurang (throne). During the reign of the universal government, a very large, belligerent and religious state emerged. He was a very religious person who did his best to unite India and turn it into an Islamic country. Also in his time, the Gurkhani Empire was the last empire with the golden age of Islam in the world. He was the third son of Shah Jahan and his Iranian mother, Arjmandbano, nicknamed Mumtazmahl, and the beautiful Taj Mahal building was built in his memory. "Aurang" is a Persian word and means throne or throne, and Aurangzeb means beautifying and deserving of the throne.

Shah Jahan fell ill during Ramadan 1068 AH (1658 AD) and a bloody rivalry broke out between his sons for the throne. The eldest son Darashkooh was naturally known as his successor, but the brave brother of the brave king in Bengal announced his father's succession. Shah Jahan's glorious armies fought the brave king and he was forced to retreat. Immediately, the youngest son of Muradbakhsh, with the secret promise of supporting Aurangzeb, who was the third son, proclaimed the kingdom in Gujarat. Aurangzeb apparently invaded Aurangabad to the north in support of Murad Bakhsh. Shah Jahan officially announced that Darashkooh was his successor and had entrusted him with the throne, but Aurangzeb declared that Darashkooh had usurped the government and invaded the capital. The ruler of Rajput fought them to prevent the advance of Aurangzeb and Muradbakhsh. Aurangzeb defeated him and increased his focus on Darashkooh's army. After that, with a series of bloody battles, he defeated the glorious army. Fearing for his life, he fled to Delhi, leaving the Shah of the world behind in Agra. The old king was besieged by his son Aurangzeb at Agra Castle. Aurangzeb refused to meet with his father and announced that his brother Darashkooh had left the religion. Then, promising to give valuable gifts, he summoned his ally Muradbakhsh, but he took him and imprisoned him, and he himself was driven to Delhi and ascended to the throne. Aurangzeb killed Muradbakhsh after three years in prison. He fought fierce battles with Darashkooh, which was eventually captured by one of the leaders of Darashkooh's corps, and after several years of imprisonment and humiliation, since he still saw him as a rival, he declared that he was an apostate and some of the night fanatics. He killed her