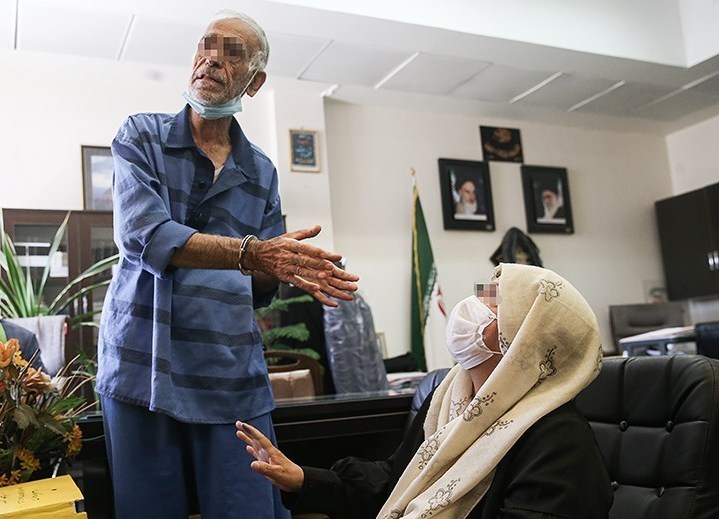 Akbar Khorramdin (born 1320 - died 30 November 1400) was a retired soldier of the Islamic Republic of Iran and a serial killer who was arrested in late May 1400 with his wife Iran Mousavi Thani on charges of killing two children and their son-in-law and confessed to the crime during initial interrogations. He was 80 years old at the time of his arrest. He was to be tried and sentenced to less than six years in prison for the murder of his children and for the murder of his son-in-law with the consent of his parents, but before his trial he died in prison due to cardiac arrest.

Akbar Khorramdin in 1994, at a ceremony held at the Iranian Cinema Museum for the screening of Babak's film, "Oath to Yashar," he took the stage and spoke only of himself; He has been chemically treated twice and cracked four times because he was an infantryman and spent 69 months on the battlefield with Iraq. He also said that he had been away from his family for 17 years during his 30 years of service. "I am a colonel in the Khorramdin headquarters. I served for 30 years, I was in the operational areas for 69 months, I was chemically treated twice and I was left with four fragments, and I am happy to have served in the country."

Babak Khorramdin was born in 1974 in Tehran and had a master's degree in cinema from the Faculty of Fine Arts, University of Tehran, and graduated in 2009. He left for London as a student in 1989 and returned to Iran after a while. Babak Khorramdin was killed by his parents in Ekbatan, Tehran, on May 15, 1400. On May 17, after parts of his mutilated body were found by a municipal worker in Ekbatan, police arrested Khorramdin's parents, who confessed to killing their son. On May 17, Akbar Khorramdin, his father, confessed to His wife's accomplice gave anesthesia to their child and after anesthesia, they killed him and left the body after being mutilated in the trash in phase 3 of Ekbatan, Ariashahr and Maidan Sanat. Akbar Khorramdin stated that the motive for his son's murder was harassment and ill-treatment of the victim by his parents. An attempt to hide the remains of his son (Babak) as a daughter and son-in-law �