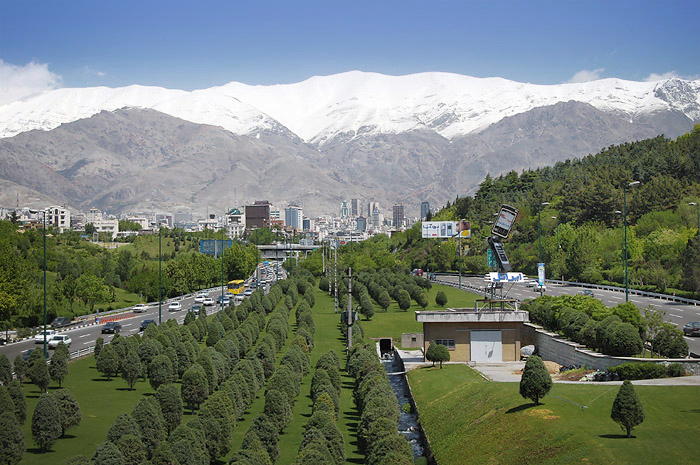 Tehran (Ava) is the most populous city and capital of Iran, the capital of Tehran province and Tehran city. With a population of over 8,693,706, it is the 24th most populous city in the world and the most populous city in West Asia. The metropolis of Tehran is the second most populous metropolis in the Middle East. In terms of natural roughness, Tehran is divided into two plains and the foothills of the Alborz, and its current range extends from an altitude of 900 to 1800 meters above sea level. Tehran has a semi-arid climate. In most years, winter provides half of Tehran's total annual rainfall and summer is the rainiest season in Tehran. Tehran is a city with a variety of ethnic groups, but its foreign population is small. As the largest Persian-speaking city in the world, the majority of the people of Tehran are Persians, and most of the people in this city are officially Muslims and Shiites of the Twelve Imams. Other religious communities in Tehran include Baha'is, Zoroastrians, Christians, and Jews. The history of life in Tehran dates back to the Neolithic period, and archaeological excavations in Tehran have led to the discovery of 7,000-year-old human skeletons and stone tools. In the early seventh century, with the destruction of the city of Rey and the migration of its people to Tehran, the knowledge of trade, construction and citizenship of the people of Rey was transferred to Tehran and caused its development. During the Safavid period, the importance of Tehran increased a lot, but the source of prosperity and development of this city goes back to its capital. Agham Mohammad Khan Qajar, the founder of the Qajar dynasty, who had finally succeeded in doing so after many attempts to capture Tehran, declared Tehran the capital on Nowruz in 1165, after years of war with the Zand dynasty and claimants to the kingdom. The transformation of Tehran from an ordinary city into a modern capital began in the Pahlavi era. During the Pahlavi era, state affairs were concentrated in the capital and the number of government employees in the city increased rapidly; During this period, the city of Tehran, in addition to two political and commercial duties, also accepted administrative duties. With the Revolution of 1978 and the beginning of the Iran-Iraq War, there was no development in Tehran for nearly a decade, and after the end of this period, the development of the Iranian capital continued and Tehran became the center of population acceptance in Iran. Tehran is the economic center of Iran and is the first industrial zone of this country, but international economic activities do not play a significant role in the number of its employees. According to the statistics of 2016, Tehran's share in the total GDP of Iran is 21% and with the allocation of half of the country's industrial sector to

INSERT INTO `wiki_article`(`id`, `article_id`, `title`, `article`, `img_url`) VALUES ('NULL()','تهران','Tehran','According to the statistics of 2016, Tehran's share in the total GDP of Iran is 21% and with the allocation of half of the country's industrial sector to','https://upload.wikimedia.org/wikipedia/commons/2/2b/Tochal_from_Modarres_Expressway.jpg')