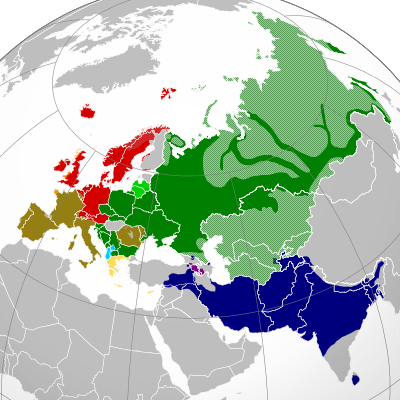 Indo-European languages ​​are a language family of several hundred common languages ​​and dialects, and most of the languages ​​of the peoples of continental Europe, Central Asia, and the Indian subcontinent belong to the same language family. This family was formerly called Aryan. Its number of speakers worldwide is about 3.4 billion. There are about 449 living languages ​​in this large family of languages, more than two-thirds of which (313) are subdivisions of the Indo-Aryan (Indian Aryan) languages. Thus, they are the speakers of the largest known language family in the world today. In the sixteenth century, European peoples who set foot on the Indian subcontinent gradually came to realize the similarities between the languages ​​now called Indo-Aryan, Persian, and European. In 1583, Thomas Stephens, an English Jesuit priest, linguist, and Konkani scholar - the first Englishman to travel to India via Cape of Good Hope - wrote in a letter from Goa to his brother in Paris, for the first time among Europeans, a structural homogeneity between Indian languages. , Greek and Latin. Two years later, in 1585, Filippo Sasti, a Florentine traveler, merchant, and linguist, wrote a letter to his Florentine friend, Bernardo Davanzati, about the similarity between Sanskrit and Italian in the words God, Snake, Seven. Eight and nine, he noted. Although these two reports cite the first European encounters with India in modern Europe as a clear indication of the connection between the languages ​​of the linguistic family, neither was the subject of any other research. Finally, Marcus Zuerius van Box Horn, a professor at the University of Leiden, identified a common language that was the ancestor of Dutch, Greek, Latin, Persian, and German and called it Scythian. He then added Slavic, Celtic and Baltic languages ​​to the family. He separated languages ​​such as Hebrew from this family. Others involved in the classification of this language family included William Jones, an English linguist and orientalist. Referring to the similarities between Sanskrit, Greek, and Latin, he concluded that they must have originated from a common language, of which Pashto, Persian, and German are derived. However, he unbelievably knew Chinese (from the Chinese-Tibetan family), Japanese (perhaps all Turkish), and Egyptian (Afro-Asian) from the same family. In contrast to the Indo-Hindi language - which with future branching became the official language of India (Hindi) and Pakistan (Urdu) - from Sanskrit and even from �