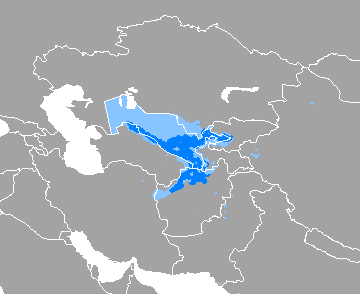 Uzbek (Uzbek: O'zbek tili /'збек тили / Uzbek Tili) is one of the Turkic languages. Uzbek is the official language of Uzbekistan and has about 27 million speakers. This language is from the Qarluq branch of Turkic languages. Persian, Arabic and Russian languages ​​have had significant foreign influences on the Uzbek language. Vocabulary, sentence structure and pronunciation in the Uzbek language have been strongly influenced by the Persian language through its historical roots. The author of the book Persian Words in Uzbek has collected more than four thousand Persian words in Uzbek. The dialect of some of these words in Uzbek is slightly different from Persian, but many of them are used as Persian words. Most of Uzbekistan's ancient and historical books are written in Persian or Uzbek using the Persian alphabet and are on display in the country's libraries and museums. You will find thousands of Persian words in the literature of the Turkic-speaking peoples of Central Asia. A medieval poem in Turkish, especially in Uzbek, has dozens of Persian combinations. . The Abu Reihan Biruni Library in Uzbekistan holds 43,000 manuscripts, 39,000 of which are in Persian. Many Arabic words have entered Uzbek through Persian. The words of the Uzbek language are strongly influenced by Persian and its dialects, Tajik and Dari. "Uzbek" is an emerging term and is used today instead of "Turkish" in Uzbekistan. Until 1904, Uzbek, like other Central Asian languages, was written in Persian-Arabic script. From 1924 to 1940, the Latin alphabet was used, and from 1940 to 2002, the Cyrillic alphabet was used to write it, and from 2002 onwards, the Uzbek Latin alphabet was used again.

Estimates of the number of speakers of this language are very different. The Swedish encyclopedia Nationalencyklopedin estimates the number of native speakers at 30 million. Other sources put the Uzbek speakers at 21 million in Uzbekistan, 3.4 million in Afghanistan, 900,000 in Tajikistan, 800,000 in Kyrgyzstan, 500,000 in Kazakhstan, 300,000 in Turkmenistan and 300. Thousands in Russia.