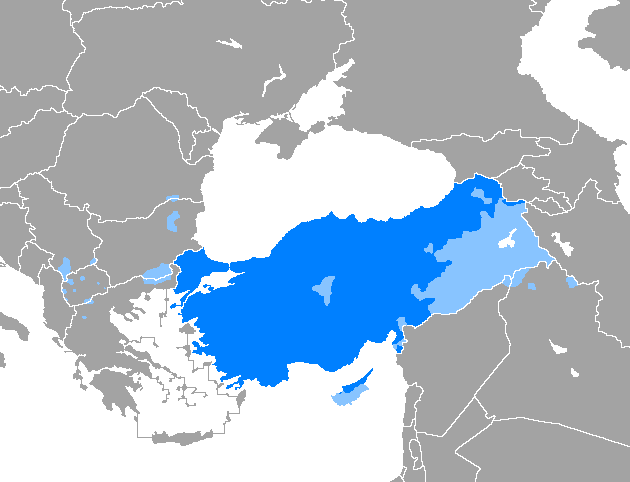 Istanbul Turkish (Istanbul Turkish: Türkçe), Turkish Turki (Türkiye Türkçesi) or Anatolian Turkish is one of the languages ​​of the southwestern branch or Oguz group of the Turkic language family, spoken by 88 million people worldwide as a first or second language. This language is the most common language in the branch of Turkish languages. Its geography includes Turkey and Northern Cyprus and parts of Iraq, Greece, Bulgaria, Northern Macedonia, Kosovo, Albania and other parts of Eastern Europe. Every year, large numbers of people migrate from Turkey to Western Europe, especially Germany, which leads to Turkish dialogue in those areas. The roots of the Turkish language can be traced to Chinese Turkestan in Central Asia. The Istanbul Turkic ancestor, Ottoman Turkish, as the official language of the Ottoman Empire, spread to the present-day regions with the expansion of their territory, replacing the former indigenous languages, especially Greek. Atatürk (the first president of Turkey) replaced the Ottoman Arabic alphabet with the Latin alphabet in 1928 with numerous amendments to Ottoman Turkish and removed the numerous words Arabic, Persian and از from this language. It is one of its features. The order of its words in the sentence is in the form of entity-object-verb and the nominative case and grammatical gender are not found in it.

Istanbul Turkish is a member of the Oguz group of the Turkish language family. Other members include Azerbaijani Turks in the Republic of Azerbaijan and northwestern Iran, Gagauz in Gagauzia, Qashqai in southern Iran, and Turkmen in Turkmenistan. The classification of Turkish languages ​​is complex. The migration of Turkish peoples, their integration with each other and with non-Turkish speaking peoples has created a complex and widespread linguistic situation.

From time immemorial, Anatolia has been home to a variety of peoples, including Assyrians, Hittites, Levites, Hurrians, Armenians, Greeks, Cimmerians, Scythians, Georgians, Colchians, Carians, Lydians, Lycians, Arabs, Phrygians, Phrygians, Phrygians, Phrygians, Phrygians, and Phrygians. There were others. War with the Turks in the early 11th century killed or enslaved many of these indigenous peoples. As these areas became uninhabited, Turkish tribes migrated to these areas. The Turkification of the natives of Anatolia was due to the conversion of many Christians and non-Christians to Islam and partly to the marriage of the Turks with the natives. The reason for this turmoil is the weakness of Greek culture in the majority of the population