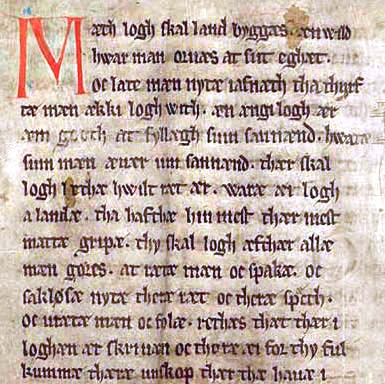 Danish (Danish: Dansk sprog) is a North Germanic language spoken by some 6 million people, mostly living in Denmark, Greenland and the Faroe Islands. It is also spoken by 50,000 Danes in the northern part of Schleswig-Holstein in Germany, where Danish is a minority language. In Iceland, Danish is taught in schools alongside English as a foreign language (sometimes Norwegian or Swedish replaces Danish). In North and South America, in Argentina, the United States and Canada, Danish-speaking associations are dynamic. Due to immigration and language replacement in Greenland, between 15-20% of Danes speak their mother tongue. Like other North Germanic languages, Danish is a remnant of the ancient Norse language. Ancient Norse was the common language among the Germans in Scandinavia during the Viking Age. Danish and Swedish are derived from the East Norse dialect, while Middle Norwegian (before being influenced by Danish) and Bokmملl, along with Faroese and Icelandic, are part of West Norse. Another recent theory, based on mutual understanding, classifies modern Danish, Swedish, and Norwegian as "territorial Scandinavian" and Faroese and Icelandic as "island Scandinavian." Although languages ​​are understandable and clear in writing, Danish has obvious differences in speaking Swedish and Norwegian, so mutual understanding depends on the region and dialects of each language. Until the sixteenth century, Danish was a continuum of dialects from Schleswig to Skونهne without a definite standard language or spelling. Along with the Protestant Reformation and the invention of the printing press, a standard language based on the Copenhagen dialect was developed. This language spread in the education and administration of the country, but German and Latin remained the most important written languages ​​until the seventeenth century. After Denmark lost its territories to Sweden and Germany, a nationalist movement took shape in Denmark, and the Danish language was accepted as an important part of Danish identity, and important literary works for the language were soon made in the 18th and 19th centuries. Today, the old Danish dialects are extinct, although there are different dialects based on the region. The main difference of this language is between the generations, especially among the younger generation, which is more innovative. The Danish language has a large vowel capacity and consists of 27 separate vowels.