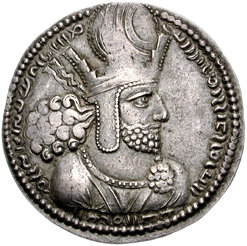 Shapur I (Middle Persian: 𐭱𐭧𐭯𐭥𐭧𐭥𐭩) was the second emperor of Iran-Shahr from the Sassanid dynasty, who came to power on April 12, 240 AD, after the death of his father Ardeshir Babakan, the founder of the empire. Before reaching the empire, as a viceroy, he took part in many battles against the Parthians and was able to find a high position with his father. After the death of Ardashir, Shapur took over and at the beginning of his reign he was faced with the religious invitation of Mani; And supported him because he used religious tolerance in his politics; Finally, he was able to get the necessary insights from Mani's new methods and use them in the unity of the government. Regarding the administration of the religious situation of the country, it can be said that Shapur, like his father, was not able to manage these matters, so the administration of all these matters was left to a cleric named Carter with free decision-making power, and Carter passed new religious laws for the Sassanid government. . Shapur fought the Romans for three periods during his reign. In the first period of the wars, he went through two wars with the Romans. The first battle that took place in Ras al-Ain was a continuation of the war that had been formed since the time of his father Ardashir and continued during the time of Shapur. In the second battle, the Iranian army and the Roman army faced each other in a place called Meshik. But in the end it led to the defeat of the Roman armies and the treaty of 241 AD was one of the negative consequences of this war with the Romans and one of the positive consequences of this war for the Sassanids was the conquest of Armenia, which was one of the most important cities of this period. In the second period of the Wars of Shapur, from 252 to 253 AD, he started his wars against the Roman Empire and was able to inflict a heavy defeat on the Romans in these wars and defeat a strong Roman army at the Battle of Berlusconi and capture the eastern provinces. The third period of the wars, as a result of the breaking of the treaty of 244 AD, another war broke out between Iran and Rome, and the Iranians were able to conquer Antioch in addition to defeating the Romans. During this period, we still see the Romans attacking to the east, and the Romans, angry with the Sassanid conquests, attacked to the east, and in 254 AD, Valerian marched east with his troops. Finally, in the city of Edessa, a battle took place between his army and the Sassanids, which was eventually defeated by the Roman army, and finally Valerian was captured by the Sassanid army. Finally in this period of wars Gordianus is another Roman emperor