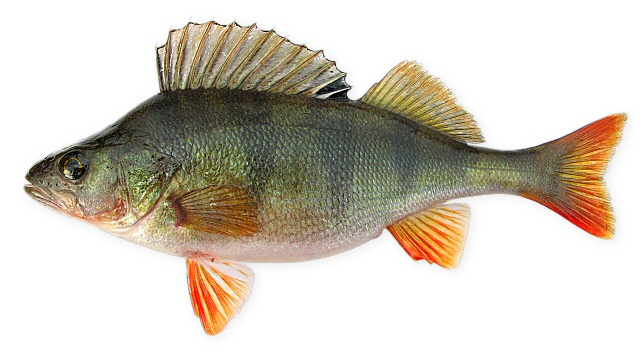 Perch (Perca fluviatilis) is a fish species that lives in fresh and brackish waters in Eurasia. It is usually green in color with dark vertical stripes. Its ventral fins and tail are red-orange. Typically, a perch is between 15 and 30 centimeters long and weighs between 50 and 350 grams, with a lifespan of about six years. Perch is Finland's most common fish species and Finland's national fish. It is a shoal fish that moves and searches for food in schools during the day, but at night it goes to the bottom under the shelter of the vegetation to rest. The perch reproduces efficiently, and the female can lay up to more than 200,000 roe eggs. Small individuals eat zooplankton, but with age the diet includes benthic animals and small fish. Perch is also caught as food fish.

Perch is a fish with sharp scales, usually green in color, with dark vertical stripes. Its color varies from almost black to light gray-green. In dark waters, especially in waters containing a lot of humus, the perches may also be brownish-yellow. Orange perch are also occasionally found in the waters where wood swims. Perch is also easily recognized by the red-orange ventral fins and tail and the black spot on the dorsal fin. A sharp spine protrudes from the largest bone of the gill cover, while the other has a finer saw blade. The neck of a fast-growing perch can become stout and steeply rising, which is why large perches are often called crooked necks. The dorsal fin of the perch is two-part. There are 13–17, usually 14 spines in the front part, 1–3 spines in the back and 13–16 joint spines branching from the tip. The tail fin has two spines and 7–10 joints. Perches can live to be over 20 years old, usually about six years. Most often, a perch is 15–30 centimeters in length and 50–350 grams in weight. According to FAO estimates, the typical upper measurement is 35 centimeters and 1.2 kilograms. In the years 1993–1994, when studying the perch in Lake Constance, it was found that the majority (93–97%) of the lake's fish biomass was perch with a length of 6–31 cm. the world's largest individual caught with sport fishing gear. In 1945, a perch weighing 5.9 kg was caught in Britain. Today, the stripes of the perch match the clarity of the water. If the water is dark, the perch has lighter stripes and vice versa.

The range of the perch in inland waters covers almost all of Europe, except for Italy and Spain, and extends to Siberia as far as Kolymajoki. In Finland, the perch has spread almost throughout the country; only the northern arm is a place where perch are not found. European perch were introduced to New Zealand in 1868 for sport fishing. Nowadays, it is feared that it will displace the original species. Perch has also been planted in Australia, South Africa, Morocco, Cyprus, China and the Azores. The North American yellow perch (Perca flavescens) is somewhat identical to the European perch both in its lifestyle and appearance.

Perch lives in slow-flowing rivers, deep lakes and ponds, and the brackish water of the Baltic Sea. It may also move in cold, fast-flowing waters, but it does not stay in them to spawn. The perch tolerates acidic water better than most other Finnish fish, but if the pH drops close to four, reproduction is no longer possible. The perch is also an intermediate host for some species of mussels.

Perch is a schooling fish that moves and searches for food in schools during the day, but at night it goes to the bottom under the shelter of vegetation to rest.

Perch dogs become sexually mature at 1–2 years of age, and females at 2–4 years of age. Perch spawns in spring between April and June, when the water temperature exceeds six degrees.