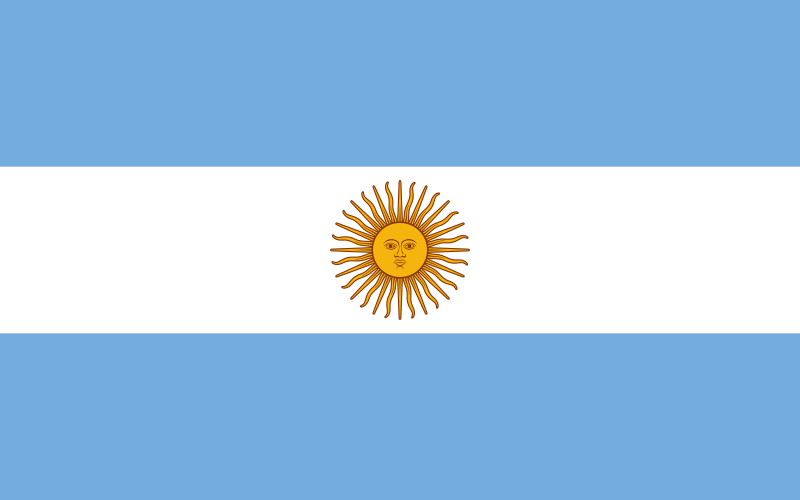 The Argentine Republic or Argentina (esp. Argentina, República Argentina, IPA: [reˈpuβlika aɾxenˈtina] listen to the pronunciation?) is a country in the southern part of South America on the west coast of the Atlantic. Argentina stretches from the tropical north to the southern tip of South America's Antarctic. Its neighboring countries are Bolivia, Brazil, Chile, Paraguay and Uruguay. Argentina is the eighth largest country in the world by area and it is the second largest country in South America after Brazil. It stretches from the tropics to the 54th parallel and its landscapes vary from Andean glaciers to pampa plains and the Amazon rainforest. The country's animal population includes monkeys, jaguars and penguins. Argentina is a founding member of the UN and belongs to the G20 countries. Argentina, Brazil and Chile have sometimes been collectively referred to as the ABC countries. At the beginning of the 19th century, soldiers, conservatives and left-wing leaders have alternated at the head of the state that became independent. At the beginning of the 20th century, Argentina was one of the richest countries in the world, but later the economy has become unstable and the country has had several economic crises.

Argentina is shaped like a long and narrow triangle. The surface area of ​​the country is 2,780,400 square kilometers, which does not include the part Argentina claims from Antarctica, nor the Falkland Islands claimed by Argentina. The state is 1,580 kilometers from east to west at its widest point and 3,694 kilometers from north to south at its longest. The northernmost point is at latitude 22 °S, which is still considered tropical, Tulimaa extends to the south of latitude 54 °S. Argentina can be divided into four regions in terms of topography, the Andes, the northern part of the country, Pampa and Patagonia. The northwestern part of Argentina belongs to the Andes mountain range, which runs through the entire country and forms the western border with Chile. The highest mountains are in the northern part of the region, and there is also the highest mountain in South America, Aconcagua at 6,959 meters. To the east of the Andes there are many lower mountain and hill ranges. The climate is hot and dry, but there is enough water to grow corn. Instead, for example, wine growing in Mendoza relies heavily on artificial irrigation. The northern region of the country can be divided into two parts, the dry lowland between the Andes and the Paraná River, the Gran Chaco, and Mesopotamia, between the Paraná and Uruguay Rivers. In the central part of Argentina, there is a wide plain area called the pampa. The thousand kilometer long area is located south of the 33rd parallel. On top of the granitic bedrock, there is fertile loess in a layer up to hundreds of meters thick. The Patagonian steppe, on the other hand, stretches from the Colorado River at the 39th latitude south to the Strait of Magalhães. Wind and rain wear away its topsoil, and only the river valleys are suitable for sheep farming. From the Magalhães Strait north to Argentino Lake (46 S), the land has been weighed down by continental ice and is still rising. As the Andes rose, there has been volcanic activity here. Glaciers and rivers have created lush forest landscapes and perfect pastures in some places. There are two glacial regions in the Andes, the southern and northern Patagonian glaciers. Argentina's largest catchment area is Paraguay–Paraná–Río de la Plata. The latter is a wide estuary formed by Paraná and Uruguay. The Paraná region has rolling hills and floodplain forests. The northern border has impressive river valleys, such as the Iguassu Falls on the border with Brazil. Outside of the Paraná watershed, Argentina's rivers are not very large. Many pass through dry regions and may even be dry for part of the year. The Colorado and Río Negro in the northern parts of Patagonia flood seasonally when they receive meltwater from the Andes. Argentina's bedrock belongs to the South American continental plate, which continues below sea level as a continental shelf that stretches over a thousand kilometers to the Falkland Islands. The plate has moved further than the African plate