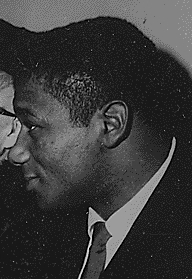 Floyd Patterson (January 4, 1935 in Waco, North Carolina – May 11, 2006 in New Paltz, New York) was an American boxer, Olympic champion, and two-time professional heavyweight boxing champion of the world, best remembered for his three bouts against Sweden's Ingemar Johansson. Patterson won the Open World Heavyweight Championship in a match against Archie Moore in 1956. When he became champion, Patterson was only 21 years old, making him the youngest world heavyweight champion of all time. Later, Mike Tyson has managed to break this record. In addition, Patterson is remembered as the first boxer to win both the Olympic gold medal in boxing and the professional heavyweight world championship, and the first double world champion in his weight class. He lost his title to Ingemar Johansson in 1959, but won it back in a rematch and defended his title one more time after that before losing it to Sonny Liston in 1962. Even after that, Patterson attempted to regain the world title three times, first in a rematch against Liston, against Muhammad Ali in 1965, and against Jimmy Ellis in 1968, however unsuccessfully. He retired in 1972 after losing his second encounter against Ali in the NABF Championship match. Patterson's idiosyncratic Peek-a-Books style of boxing and speed made him a televised crowd favorite in the 1950s, despite his poor punching ability. In the seven world championship matches he played, he went to the canvas 16 times. After his career, he served as a boxing trainer and president of the New York Boxing Commission. He left that position after falling ill with Alzheimer's disease in the late 1990s. Floyd Patterson died at his home in New York on May 11, 2006.

Floyd Patterson was born in Waco, North Carolina on January 4, 1935, but moved to Brooklyn, New York as a child. He was introduced to boxing at a young age at the Wiltwyck schoolhouse, where he spent two years, and after leaving at the age of 15, he continued practicing the sport at the Carlton YMCA and Gramercy Gymnasium. He had already met boxing manager and owner of Gramercy Gymnasium Cus D'Amato a few years earlier when he was assisting his older brother who trained at the same gym and was coached by D'Amato. He took Patterson under his tutelage. Patterson won the New York State Golden Gloves and the United States Amateur Boxing Championship. At the age of 17, he was chosen to represent his country at the 1952 Summer Olympics in Helsinki. Young Patterson competed in the middle division and Pete Mello, who was the team's coach, chose him as his favorite of all the team's competitors. Patterson was dominant in his series, defeating all of his opponents except France's Omar Tebakka by knockout. Patterson won the Olympic gold after knocking out Romania's Vasile Tiță in the finals in the first round after less than a minute of the match. After returning to New York, Patterson immediately signed a professional contract with Cus D'Amato. D'Amato hired Danny Florio, who coached Jersey Joe Walcott, as Patterson's coach. D'Amato, who took a fatherly approach to his protégés, was a significant force in Patterson's career. Indeed, Patterson has said that thanks to D'Amato, he never had to worry about what contracts to write or tell reporters, because D'Amato arranged all of that for him. There was complete trust between the couple.

On September 12, 1952, Patterson began his professional career in the lower heavyweight division. He entered the ring wearing an Olympic team robe and defeated his handpicked opponent, Eddie Goldbold, by knockout in the fourth round. Patterson won his career no