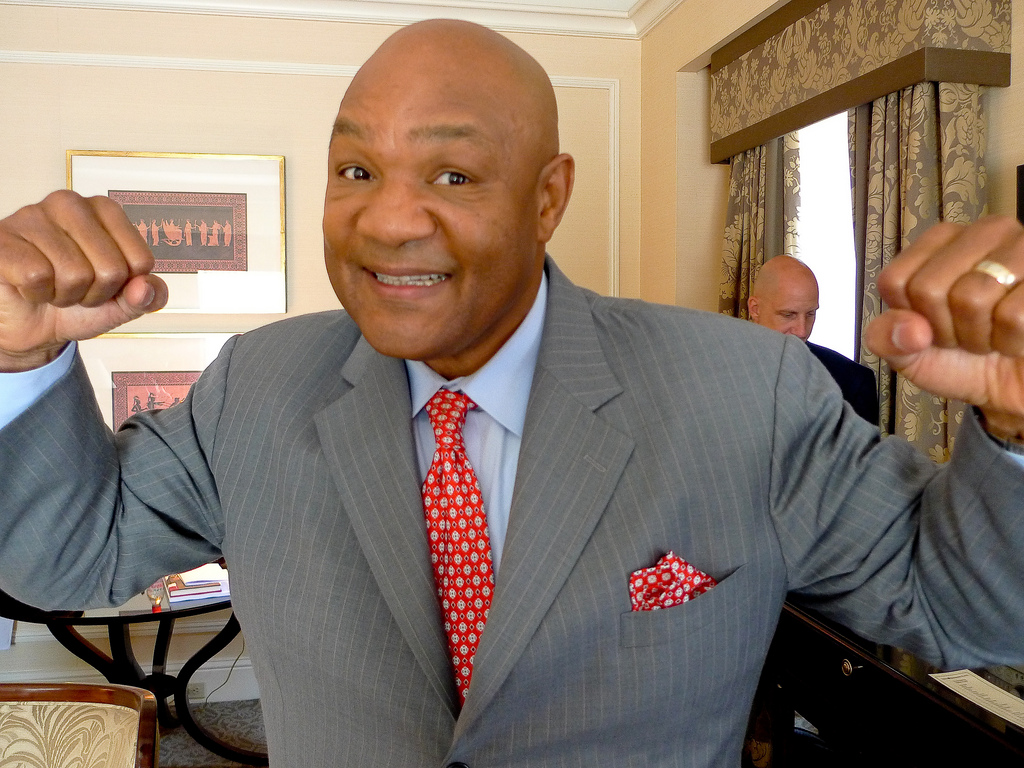 George Edward Foreman (born January 10, 1949 in Marshall, Texas, United States) is an American boxer. As an amateur, he won gold at the 1968 Mexico Olympics, and as a professional, he managed to become the world heavyweight champion twice. Foreman began his professional career shortly after his Olympic victory and became the heavyweight champion of the world in 1973 after defeating Joe Frazier by technical knockout in the second round of the bout known as the Sunshine Showdown. He defended his title twice before losing it to Muhammad Ali in 1974 in the famous Rumble in the Jungle match. He fought only a handful of times after that, suffering the second loss of his career to Jimmy Young, before retiring in 1977. Foreman made a surprise comeback in 1987, ten years after his last fight, and in 1994 he won his second world title by knocking out the WBA and IBF world champion by Michael Moorer. He was 45 at the time, making him the oldest heavyweight champion of all time. After that, he defended his title a few times until his second retirement in 1997, when he suffered a loss to Shannon Briggs while defending the WBU world title. After his boxing career, Foreman has made a fortune selling barbecues made under his name.

George Edward Foreman was born on January 10, 1949 in Marshall, Texas, but grew up in the state capital, Houston. His father's name was Leroy Moosehead, but he got his last name from his paternal side, J.B. Foreman. He was the fifth of the family's seven children and grew up in poor conditions. His stepfather was a railroad worker who often drank all his wages. George dropped out of school at the age of 13, but did not get involved in criminal activities, because he became interested in the youth work service, which he had heard about on television. The pay was $30 a month, and between the ages of 16 and 18, Foreman finished school and worked in Oregon and California during his service. Foreman was 18 when he started boxing. While on active duty in Oregon, he got into a fight with another youth, and the group's supervisor and boxer Doc Broadus noticed his potential. He was the first to develop Foreman's technique. Foreman admired Jim Brown and originally wanted to be a star football player, but he decided to try boxing in a vocational program to show his friends that he is not a coward. With training, Foreman's weight dropped from 113 kilograms to less than 100 kilograms. He started his amateur career in February 1967 and won 21 of the 24 matches he played. Foreman managed to win the American amateur championship in 1968. The stain was left by discus in the West Germany-United States boxing match. Albert Sandellin was Foreman's coach during his amateur career. Just a year and a half after starting his amateur career, at the age of 19 and with 24 matches, Foreman won gold at the 1968 Mexico Olympics. Foreman himself has said that of all his achievements, perhaps the most he appreciates is the Olympic gold he unexpectedly won. In the games, he first won over Lucja Trela ​​from Poland by referee points 4–1, then Ion Alexe from Romania with a technical knockout in the third round and Giorgio Bambini from Italy with a knockout in the second round. In the final match, Foreman defeated the Soviet Union's Ionas Tšepulis with a technical knockout in the second round. On the podium, Foreman warmed the hearts of many patriotic Americans by waving a small American flag in his hand. Many were outraged when Tommie Smith and John Carlos raised their black-glove-covered fists in the air on the podium at the same Olympic Games. They j