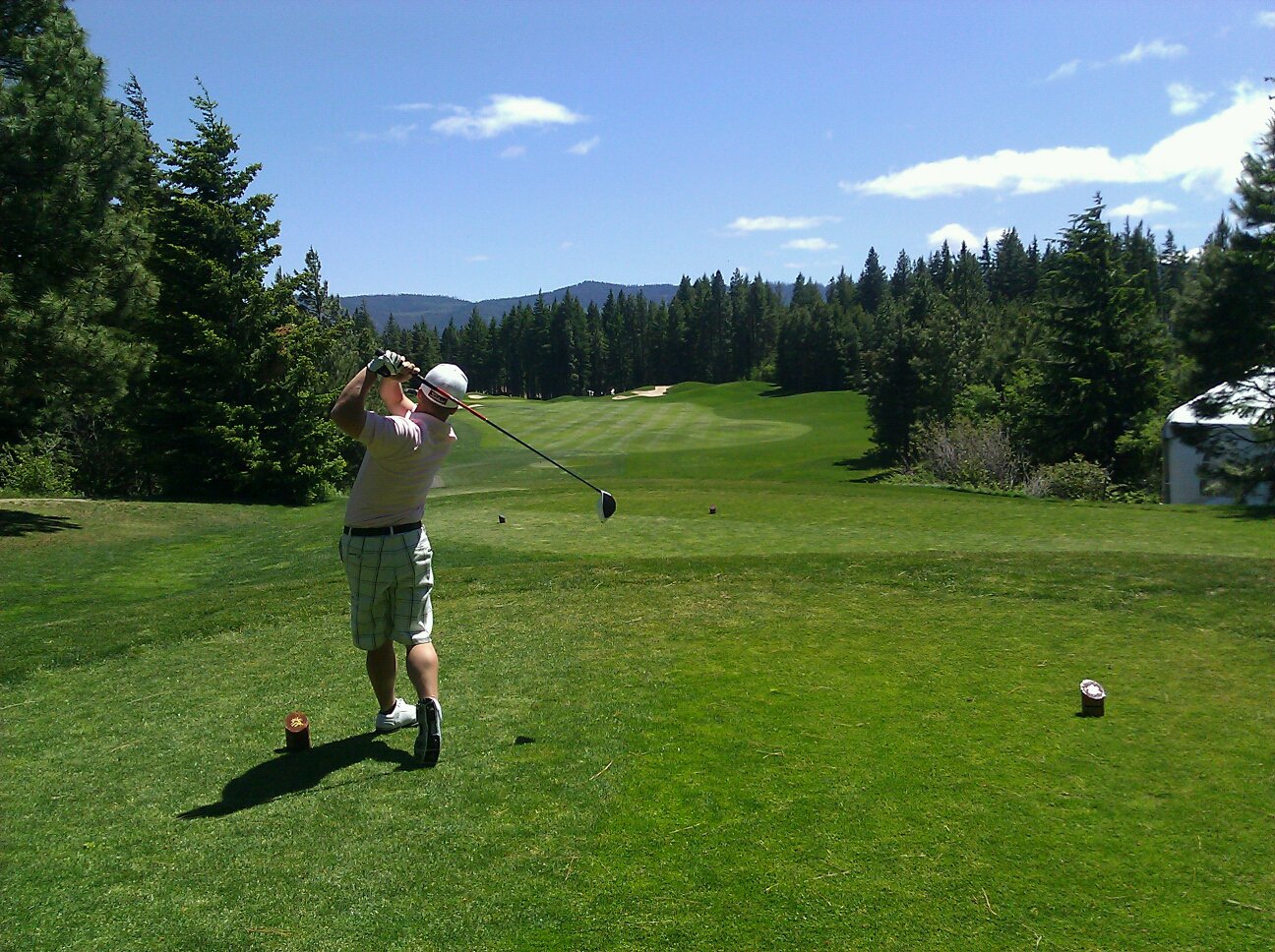 Golf is a club game where players try to hit a small ball into a hole with metal clubs. The golf course has nine or 18 sections, or holes, and the goal of the players is to use as few strokes as possible to pass the entire course. The holes can be several hundred meters long. The player starts each hole by hitting the ball from the tee spot, after which he continues hitting the ball towards the hole from the place where it has stopped. The golf course has varied terrain. The green surrounding the hole has short grass, but the fairway leading to the hole has tall grass and various obstacles around it. A golfer uses different clubs, with which the shot can be hit with a different trajectory and length depending on the distance and terrain. Golf has several forms of play. The most common of them are the stroke play, where the strokes used on the entire course are added together, and the hole play, where you play for the victory of individual holes. The most important competitions in golf are the professional major tournaments and the Ryder Cup team competition. Golf returned to the Olympics after a hiatus of over a hundred years at the 2016 Olympics.

In golf, players try to play their ball with a club by hitting the hole. A full round of play consists of 18 holes, and the goal of the players is to use as few strokes as possible to complete the round. The player starts each hole by hitting the ball from the tee spot, after which he continues hitting the ball towards the hole from the place where it has stopped. The position of the ball, the area required for hitting or the line of play cannot normally be improved. In the hole game, you play for winning individual holes, and in the stroke play, the winner is the one who plays the entire game round with the fewest strokes.

A golf course is an area used for playing golf and related activities. A golf course is an area of ​​a golf course intended for actual golfing. The course has nine or 18 holes. Such a section of the field as well as the hole dug into the ground at the end of it is called a hole. Each hole has a teeing ground, a fairway, a putting green and a hole. The opening stroke is performed from the teeing ground. The hole is 10.8 centimeters in diameter and at least 10 centimeters deep. A flag is often erected in the hole to indicate its location. The green surrounding the hole is grass cut very short. The fairway is a shortened area from the tee to the green, and players aim to keep their shots on the fairway. There are no trees on the fairway, and the grass is shorter there than in the semi-rough and rough around the fairway. The hole may also have sand obstacles and natural obstacles such as trees, ponds and streams. If the ball remains in the water hazard, the player is penalized one stroke. When the ball is in the hole, the player moves to the next tee spot. The golf course often also has a driving range and a practice green for practice and warm-up. There may be special paths for golf carts.

Each hole has a par number calculated according to its length, which is the number of strokes that should reasonably be used to get through the hole. A par 3 hole is a maximum of 220 meters, a par 4 is 220 to 430 meters and a par 5 is over 430 meters. The assumption that the player putst on the green twice is included in each par number. The names of the hole-specific results are determined by the par number of the hole: par is the same number of strokes as the par number of the hole A birdie is one shot under par eagle is two under par the albatross is three under par, a very rare result bogey is one over par double bogey is two over par The player has a personal handicap, which is the average of how many strokes his score exceeds the par of the holes.

During the round, the player can carry mu