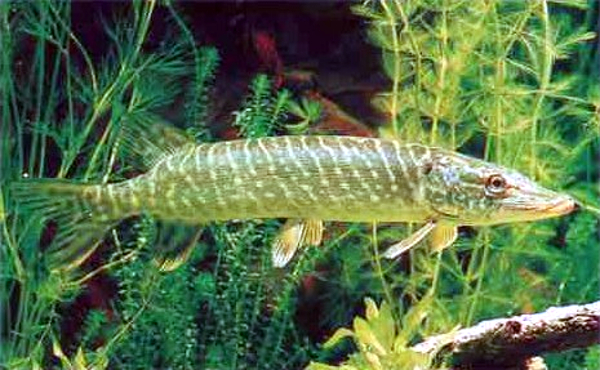 The pike (Esox lucius) is a predatory fish that lives in inland and coastal waters and is found in most of northern Eurasia and North America. It is a vigorous species with a wide range and can live in many lakes and rivers as well as in the low-salinity Baltic Sea. The body of the pike is long and slender, and its fins are at the stern. The sides of the pike are green, the belly is pale and the back is dark or almost black. There are 7-9 rows of shark-yellow spots on the sides, and dark spots on the reddish-brown fins. The largest females may weigh up to 20 kg, but extremely rarely more than 25 kg. A pike can live up to 30 years in the wild. The pike is an opportunistic animal, and it practically eats the fish that is best available. It prefers abundant species as well as slow swimmers and weakly swarming fish. If there are not enough other fish species available, the pike may also eat its species mates. In addition to fish, the pike may catch small mammals, young waterfowl and insects, which are the main food of individuals under one year old. The pike preys in daylight and uses, for example, aquatic vegetation for stalking. The pike spawns in the spring after the ice has left. It spreads its roe over a wide area, and the chicks hatch in two weeks. People have been fishing for pike for a long time. In addition to Finland, the pike, which is particularly popular in Russia, is the second most important catch fish in Finland's recreational fishing, right after the perch, in terms of weight of the total catch. Due to its popularity, the pike has been widely planted outside its natural habitats; indeed, it is considered a harmful alien species in some parts of North America. A full-grown pike has few natural enemies besides humans, and it is the top species of its food chain.

The pike looks like a powerful predatory fish: a long, smooth gill and a shuttle-like body, large eyes and a protective color of green with yellow spots. The crocodile-like long powerful jaws hide a large jaw full of sharp needle-like teeth. The dorsal fin and tail fin are typically close to the tail of pike predatory fish, which with the help of powerful muscles enable quick attacks on the prey. The pike's approximately seven hundred teeth grow not only in the jawbone but also in the bones of the oral cavity, the palate and the hyoid bone; even the tongue and gill arches have many tooth-like projections. The pike's dentition renews itself irregularly, and not all dentitions have teeth at the same time. The characteristic coloring of the pike includes variably greenish yellow-patterned sides, a pale belly and a dark back, but the variation of colors and patterns is great from one individual to another. The color of the fish is also affected by the living conditions and age. In humus-rich turbid waters, pike have a darker, sometimes almost black coloration. Correspondingly, in clear waters, pike can be very light in color. The typical side pattern of the pike is 7–9 rows of shark-yellow spots or streaks, which sometimes combine into stripes. Especially the younger individuals have yellow vertical stripes instead of spots, which is a protection pattern according to the environment for young pike that are attached to aquatic plants at the beginning of their life and bask in their shelters. As the pike grows, the stripes develop into rows of spots. In addition to the sides, there is also a patchy pattern on the gill covers of the fish. The fins are reddish-brown and, especially in older units, dark-spotted. The pike's protective coloring is well suited for hiding in the shelters of aquatic vegetation and for stalking prey. Color deviations are rare but not unheard of. Almost black pike are found in coastal waters, and pure silver colored pike have also been found in Sweden. The lateral line runs almost straight