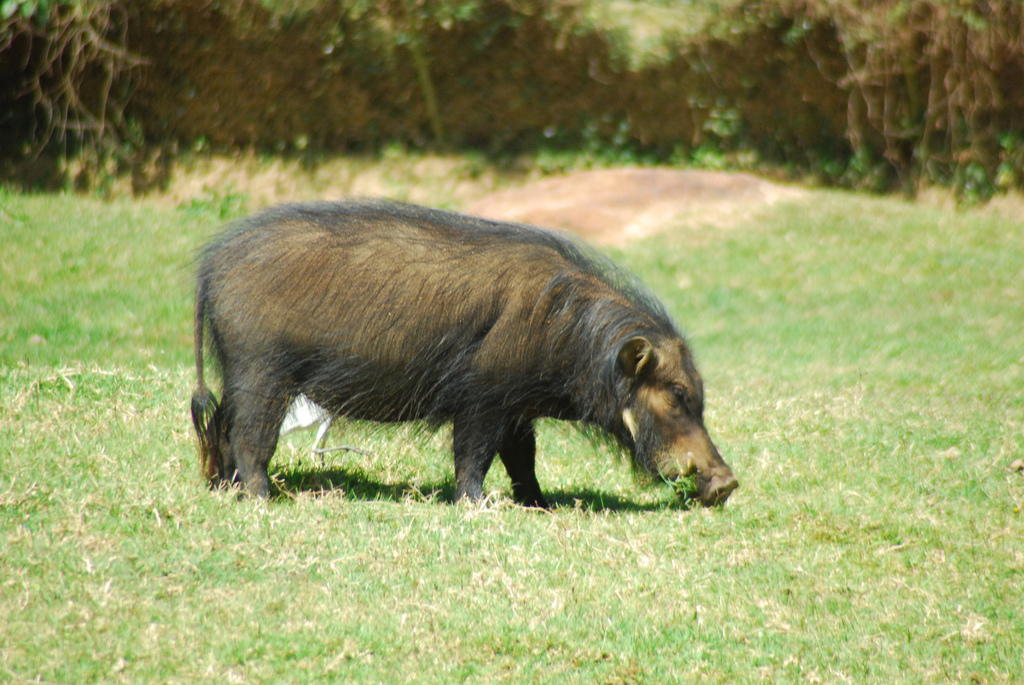 Hylochoerus meinertzhageni (Hylochoerus meinertzhageni) is a viable ungulate species that lives in the forests of central and western Africa. It is the only species of the genus Hylochoerus. Giant wild boars are the largest wild pigs. They can grow up to 210 centimeters long and weigh 275 kilograms. Their body is stocky and their head is wide, but their legs are short. The skin is covered with long and coarse hairs that stand up as the animal accelerates. The giant forest boar was not scientifically described until 1904, and the lifestyles of these sensitive animals are still not well known. They move in herds and feed on grasses, leaves and fruits. They can reproduce at any time of the year, and the sow usually gives birth to 2 to 6 pups. There are many species-related beliefs in the cultures of forest peoples in tropical Africa. The Finnish Species Information Center recommends the use of the name giant pig.

The giant wild boar is the largest of the wild pigs, but some domestic pig breeds may grow larger. The species have a body length of 130 to 210 centimeters, a tail length of 25 to 45 centimeters and an withers height of 75 to 110 centimeters. The weight of an adult individual is 100 to 275 kilograms. Boars are much larger than sows. The body is stocky, rather long and round, and the legs supporting it are quite short. The hind body is higher than the withers. The head is broad and sturdy, the snout strong. The muzzle is exceptionally wide and terminates in a large weed plate covered with short, black hair. The skull of the giant boar is 48 centimeters long and has a total of 34 teeth. Impressive upper-toothed canines can grow up to 35 centimeters long. They are longer than the lower canines. The canines are constantly rubbing against each other, which sharpens the lower canines for knife sharpness. There is a bare strip of skin in front of the eyes, and the face is otherwise almost hairless. Under the eyes are large elongated tufts of leather, which grow large, especially in males. The leaf-shaped ears of the giant boar are small and pointed. The clay-colored skin is covered with long and very coarse dark brown or black hairs. The hair may thin considerably with age, but the brush covering the forehead and neck will remain thick. The neck brush rises as the animal accelerates. The length of the brush hair can be up to 18 centimeters. Unlike other pig species, the giant boar has a gap in front of each eye into which the glands open. Another special feature is the depression at the top of the skull. Sows have four mothers. Distribution and habitat Giant forest boars are found in Africa in dispersed populations in undisturbed lowland forest areas in West Africa, east and north of the Congo River, and in the western part of the East African burial ground, in the mountainous regions of Kenya and Ethiopia. In West Africa, it lives in Guinea, Liberia, southern Nigeria, Côte d’Ivoire and Ghana; In Central Africa, it lives in West and South-East Cameroon, the Central African Republic, the Democratic Republic of the Congo, the northern part of the Republic of the Congo, northern Gabon, southwestern Ethiopia, South Sudan and Uganda. In addition, there are unconfirmed observations from Sierra Leone, Guinea-Bissau and Togo. No observations have been made of Rwanda’s giant forest boars since the 1980s, but individuals of the species may still live in the Nyungwe forest. From Equatorial Guinea, the species is believed to be extinct. In the past, the giant forest boar was also believed to live in the forests of Ngorongoro in Tanzania, but there is no conclusive evidence of the species occurring in Ngorongoro or elsewhere in Tanzania. Giant forest boars have not been identified by research teams or authorities in the area, although the