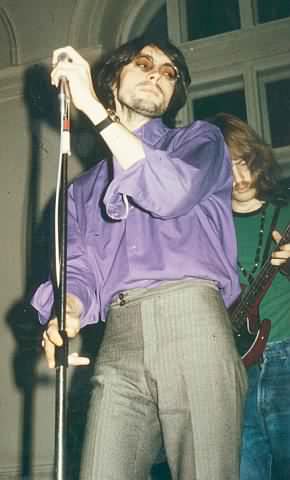 James Francis “Jim” Pembroke (January 27, 1946 in London, UK - October 8, 2021 in Kansas City, Missouri, USA) was a British rock musician. Pembroke became known mainly in Finland, where he first arrived on May Day 1965 at the invitation of his girlfriend Maija Tikkanen, who worked in London as an au pair in London. Jim Pembroke became best known as the frontrunner and lead singer of progressive rock performer Wigwam. Prior to Wigwam, he co-founded Blues Section.

Next to the dance floor to the Blues Section

After arriving in Finland, Pembroke spent time with Maija Tikkanen in the Varkaus region. Jussi Raittinen had heard about “a British client who had studied at the same art school as Rollarit”. At Kämärvi in ​​Varkaus, Jussi and Eero Raittinen asked Pembroke for the first time on stage with their band The Boys. As a visiting soloist, he performed some songs. At the same time, Pembroke, who was worried about his livelihood, had sent a letter to concert organizer Jorma Weneskoski and told about himself. Enthusiastic about the exotic and apparently talented British, Weneskoski replied to the letter and Pembroke moved to Helsinki. Jim Pembroke's most important bands from now on were the Beatmakers who stayed in the shelters of Weneskoski and The Pems, which developed from it. In early 1967, Pembroke joined the band Blues Section, which disbanded in the summer of 1968. During this time, Pembroke became acquainted with the record company Love Records, under whose auspices he did both music and office work.

In early 1969, Blues Section members Pembroke, Nikke Nikamo, Ronnie Österberg and Mats Huldén were forming a new band on the ruins of the Blues Section. From the background of the name, Pembroke has narrated, “Wigwam, it’s the kind of Tent of the Indians where they keep a campfire or burn a chimney of peace, and there comes smoke from there”. In the new band, Pembroke sang and composed. Organist Jukka Gustavson later bought an electric piano, which Pembroke learned to play in addition to the piano he had previously mastered. The themes, compositions and arrangements of Jukka Gustavson and Pekka Pohjola were often ambitious and experimental, while the songs written by Pembroke were . The band's first album, Hard N ’Horny, was clearly divided into the A-side composed and lyrics by Gustavson and the B-side by Pembroke.

Following the release of Being in 1974, both Gustavson and Pohjola resigned from Wigwam in early summer 1974. The band took a break for the time being that same summer. However, Pembroke, Wigwam drummer Ronald “Ronnie” Österberg and guitarist Pekka “Rekku” Rechardt, who joined the band at the turn of the year, decided to reassemble the band. Pembroke was now the only singer in the band. After the departure of the progressively oriented Gustavson and Pohjola, Pembroke managed to realize himself as a pop rock composer. "I just wanted to make pop songs in the style of the Beatles and Kinks," he later stated. In the 1980s, Pembroke played in several ensembles and visited the records of several Finnish artists as a composer, lyricist or singer, in addition to which he composed music for TV films. In 1990, Pembroke and Rechardt began performing Wigwam songs on their duo gigs. The band was soon revived, but the activity stopped after a couple of years. Pembroke spent the second half of the 1990s in Kansas City, USA, playing with local musicians he had met in the past when Wigwam tried to fail.