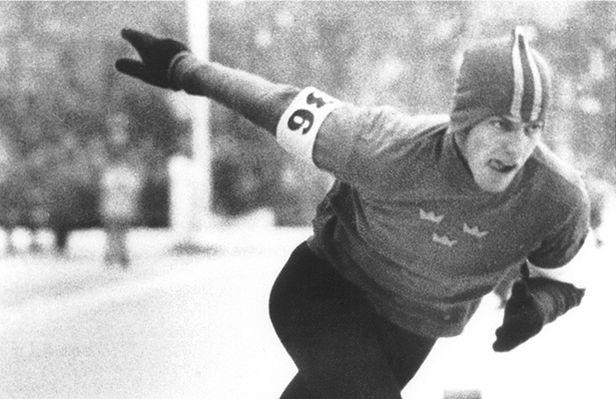 Jonny Nilsson (February 9, 1943 in Filipstad – June 22, 2022 in Hindås) was a Swedish speed skating Olympic champion and world champion, who was one of the world's best in his sport in the mid-1960s. At the age of 19, in 1962, Nilsson finished tenth in the overall points of the World Championships after being the fastest at 10,000 meters. In the EC competitions, he finished 15th. In 1963, he won the world championship in Karuizawa after setting new world records for 5,000 meters (7.34.3), 10,000 meters (15.33.0) and total points (178.440). In the EC competitions of the same year, he finished seventh. Based on his achievements in 1963, Jonny Nilsson received a gold medal from Svenska Dagbladet. Likewise, he was chosen as the best sportsman of the Nordic region in 1964. About his successful year, Nilsson wrote the book Sikta mot stjörnernna. During his military service, he won the military pentathlon in 1964. At the 1964 Innsbruck Olympics, Nilsson won gold in the 10,000 meters by 15.9 seconds over silver medalist Fred Anton Maier and finished sixth in the 5,000 meters. In the 1964 World Championships, he stopped due to illness and finished tenth in the European Championships. In 1965, he was fourth in the World Championships and eleventh in the European Championships. In 1966, he achieved bronze at the World Championships and finished fourth at the European Championships. At the 1968 Grenoble Olympics, Nilsson finished seventh in the 5,000 meters and sixth in the 10,000 meters. After the Olympic year of 1968, he ended his career. At the end of his career, as a famous person of that time, Nilsson had the opportunity to have his own TV show "Jonnys Hörnä", which he did in 1966–1968. In 1970, the speed skaters formed their own professional series, which ran from 1972 to 1974, but fell into financial problems. Jonny Nilsson was involved in the organization of that professional union. In the European Parliament elections held in 2009, Jonny Nilsson was the candidate of the Christian Democrats. He was also a candidate of the Christian Democrats in the 2010 parliamentary elections. He did not manage to get through in either election.