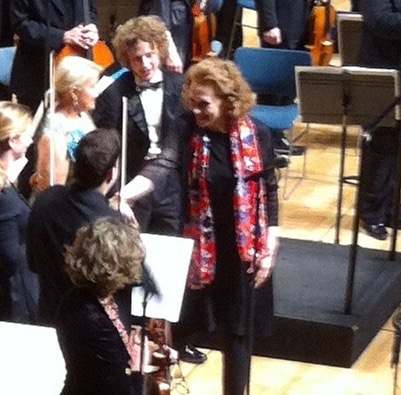 Kaija Anneli Saariaho (o.s. Laakkonen; born October 14, 1952 in Helsinki) is one of the most well-known Finnish contemporary composers. He has composed a lot of vocal music, four operas, chamber music and great works for symphony orchestra. In many of his works, Saariaho uses electronically produced or modified sounds alongside traditional instruments. He has received several notable music awards. Saariaho has lived in Paris since 1984.

Background and years of youth

Kaija Saariaho, a relative of Laakkonen, grew up and went to school in Helsinki. His father was Launo Laakkonen, CEO, who later received the title of Industrial Counselor. He played violin, guitar and piano and attended the Eastern Helsinki Music College for a few years. During his first years of study, Saariaho studied graphic design at the University of Art and Design, piano at the Helsinki Conservatory and musicology at the University of Helsinki. After a few years he transferred to the Sibelius Academy.

Saariaho studied composition at the Sibelius Academy under Paavo Heininen in 1976–1980. Since then, Saariaho has studied in Freiburg, Germany, under Brian Ferneyhough and Klaus Huber (diploma in composition in 1982) and at the IRCAM Institute in France. Saariaho belongs to the so-called third generation of Finnish modernists. In the works of this generation, texture music has already replaced the extreme form of European modernism, seriality. Saariaho and his student friends were founding the Open Ears Association, the purpose of which was to make this contemporary music known and developed in Finland. In addition to Saariaho, the members of the association included Magnus Lindberg, Jouni Kaipainen and Esa-Pekka Salonen. Saariaho was the chairman of the association at the turn of the 1970s and 1980s. Within the association, the term “hairdress opera” was originally intended to be derogatory, referring to Joonas Kokkonen's Last Temptations and Aulis Sallinen's Red Line's traditional melody language and subject choices. In an interview with Synkooppi in 1982, Saariaho announced that he would never compose an opera or a symphony. 1997-1998

Saariaho's first opera, Distant Love, premiered in Salzburg, Austria in 2000. The New York Times described the work as a “poetic masterpiece,” and both BBC Music Magazine rated it as the best new work in 2000. In 2003, the composer won the Grawemeyer Prize for his opera, 200,000 US dollars. The opera premiered in Finland in September 2004 at the National Opera. Saariaho's second opera, Adriana Mater, was premiered in Paris in March 2006. in April 2015 at the National Opera. The title of the opera is the French Marquis Émilie du Châtelet. It is written for Karita Mattila. The librettist for all three operas is Amin Maalouf. The fourth opera, Only The Sound Remains, is based on two Japanese plays by Nō. It was performed at the 50th anniversary celebrations of the Dutch National Opera in 2016. Saariaho's Fifth Opera Innocence is based on Sofi Oksanen's libretto. The opera has five performances and sings