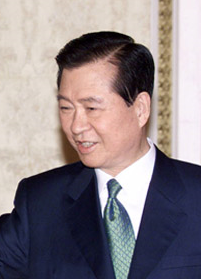 Kim Dae-Jung (Hangul: 김대중; Hanja: 金大中; Renewed Latinization: Gim Daejung; December 3, 1925 Haui-do, Korea - August 18, 2009 Seoul, South Korea) was President of the Republic of Korea from 1997-2003. He was awarded the Nobel Peace Prize in 2000 for his approach to North Korea. Kim Dae-Jung rose to president in the midst of the economic crisis, and in his time South Korea managed to revive its economy to a new upswing.

Life before the presidency

Kim went into politics in 1954 to oppose Syngman Rheet. He was elected to the National Assembly in 1961, but the coup by Park Chung-hee invalidated the election. He was re-elected in the 1962 and 1967 elections and ran for president in 1971. Kim was abducted by agents from the Korean Central Intelligence Agency (KCIA) in Tokyo in August 1973 and was being transported bound to the sea, but was apparently spotted by the Japanese naval forces and released in Seoul five days later. . However, he was sentenced in 1976 to five years in prison, which was placed under house arrest in 1978. He was released after the assassination of Park in 1979. However, he was re-arrested after the rise of Chun Doo-hwan and the events of Gwangju and sentenced to death. Under pressure from the United States, the sentence was commuted to imprisonment and Kim was exiled. He settled in Boston and taught at Harvard University until he returned to Korea in 1985, where he was again placed under house arrest. Kim ran for president in the first free election in 1987. He received 27% of the vote, with second opposition candidate Kim Young-sam 28%, with General Roh Tae-woo elected by Chun as his successor. Kim was also a candidate in the 1992 election against Kim Young, but lost to this one. He then left for Britain, where he taught at Clare Hall at the University of Cambridge. He returned to Korea in 1995 and ran for president for the fourth time. The country’s economy had just collapsed in the Asian economic crisis and the government was dissatisfied. The votes of the right were also divided between the two candidates. Kim’s rise to president was the first time the ruling party had peacefully handed over power to a candidate elected from the opposition.

Kim’s choice in the midst of the Asian economic crisis led to major changes in the country’s economic life. The economy was organized according to the guidelines of the International Monetary Fund. In foreign policy, Kim embarked on a so-called daylight policy towards its northern neighbor, which included gratuitous economic and humanitarian assistance. The improvement between the two countries led to a historic meeting between Kim and Kim Jong-il in June 2000, for which Kim was later awarded the Nobel Peace Prize. North Korea also continued its nuclear weapons program.