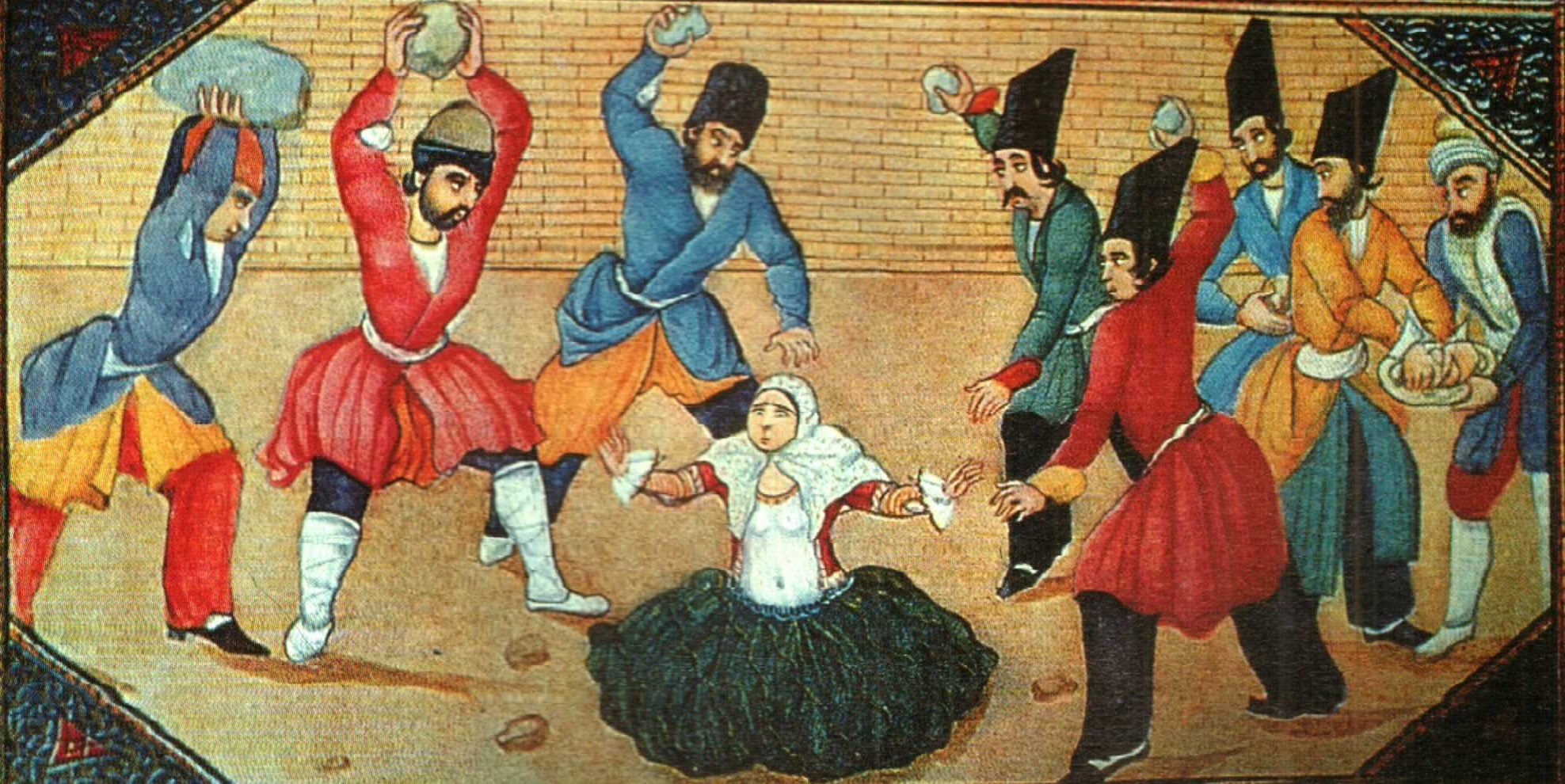 Stoning is a method of execution in which a group stoners a convict to death. Opponents of the form of punishment say stoning is a cruel form of torture that is used especially to restrict and punish the freedom and sexuality of women. The stoning punishment was also part of Judaism and is known in the books of Moses and the Talmud. The Acts of the Apostles tells how the Jews stoned Deacon Stephen to death when he defended Christianity. Stephen thus became the first martyr of Christianity. However, Jesus, described in the Gospel of John, opposed the stoning, and his remembrance "let the first stone be cast down innocent" has become famous (John 8: 7).

The punishment of stoning was converted from Judaism to Islam, and in the 8th century Ibn Hisham recounts how Muhammad ordered two fornicators, a man and a woman, to be stoned. In Islam, stoning is a punishment for fornication or sodomy.

Stoning is not mentioned in the Qur’an, which caused astonishment among Muslims in the 8th century. Ibn Majah explained this by saying that the sheep had eaten the passage in the Qur’an: “Aishan is said to have said that the verses on stoning and adult breastfeeding were revelated ten times, and the paper about them was under my pillow. When God's messenger died, we were all thinking about his death, and the tame sheep ate the paper. ” The quoted hadith is rated in the category of Hasan, which is the second highest level and means "good". According to the second version, the Zaid ibn Thabit Committee appointed by Caliph Umar demanded two guarantors for each verse in order to be accepted into the Qur’an. When only Caliph Umar himself remembered the stone verse, it was left out of the Qur'an.

Stoning is legal in Iran, Mauritania, parts of Nigeria, Pakistan, Qatar, Saudi Arabia, Somalia, Sudan, the United Arab Emirates and Yemen. In addition, it is used in Iraq and Afghanistan, among others. According to Iran’s Islamic Penal Code, a man convicted of adultery must be buried at the waist, and a woman into the chest to the depths for stoning. The stones must not be so large as to cause immediate death. Avroës, a famous philosopher and interpreter of Aristotle, also served as a Sharia judge in Córdoba al-Andalus in the 12th century. He considered that a Muslim woman who had committed adultery had to be stoned to death without digging a pit. This meant that the crowd was allowed to chase after the convict.

Elsewhere on this topic Pipsa Palttala: Iran plans to stone the mother of two. Helsingin sanomat on 5 July 2010.