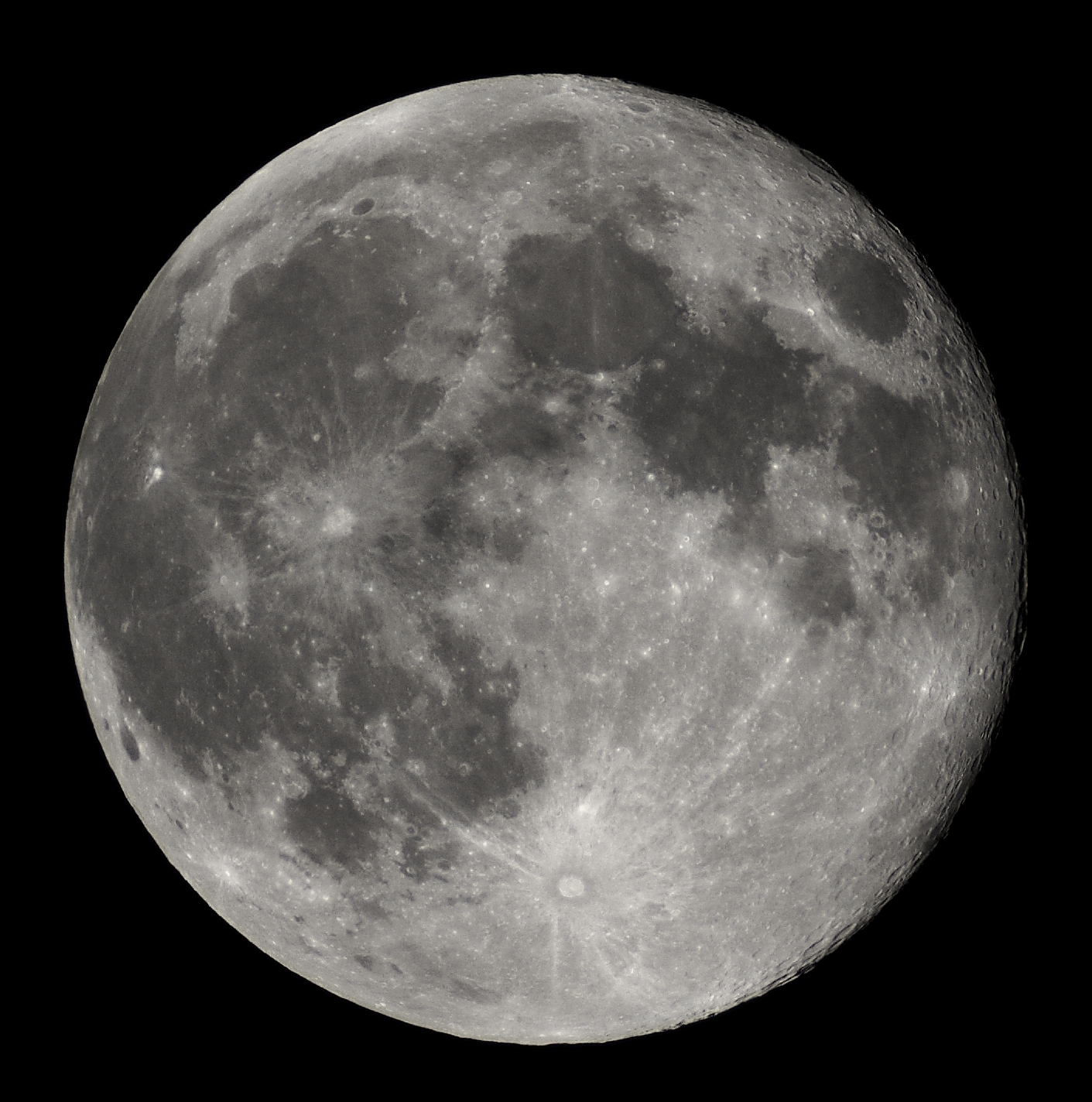 The Moon (symbol: ) is Earth's only natural orbiter and the fifth largest moon in the Solar System. Its radius is 27 percent that of Earth, making it the largest moon in the Solar System relative to its parent planet. The mass of the Moon is 1.23 percent and the density is 61 percent of that of the Earth. It orbits the Earth at an average distance of about 384,400 kilometers. The Moon is tidally locked with Earth. This means that the same side of the Moon is always facing the Earth, so the so-called dark side of the Moon is always invisible. The Moon reflects the Sun's light, and is the second brightest object in the sky after the Sun. In about a month, the Moon goes through regular phases from the new moon through the half moon to the full moon. In particular, this has made the Moon an important cultural icon, which has had a great influence on the time measurement, mythology and art of different peoples. It is believed that the Moon was born at the same time as the Earth, almost 4.5 billion years ago. Several different theories have been put forward about the birth, the most popular of which is the collision hypothesis. According to the collision hypothesis, the young Earth was hit by an object about the size of the planet Mars, the protoplanet Theia. The material left in Earth's orbit in the collision formed the Moon. The moon is the only foreign body on which humans have walked. The first unmanned probe landed on the surface of the Moon in 1959, and between 1969 and 1972, six manned space flights headed there, the first of which was Apollo 11. After 1972, only unmanned probes carrying out scientific work have visited the Moon.

Most scientists today believe that the Moon was formed 4.5 billion years ago after a protoplanet called Theia collided with Earth. This theory superseded competing theories in the 1980s. The proof of the theory is the rocks collected from the Moon by the Apollo astronauts, in which material from another planet has been found. After Theia collided with the Earth, the cores of both bodies fused together. Some of the surrounding mantle material was ejected and vaporized. It formed a cloud of loose material and dust orbiting the Earth, which condensed into the Moon over perhaps hundreds of millions of years. The Moon's orbit began to recede because the tidal bulge caused by the Moon on the Earth pulls more momentum on the Moon and transfers energy from the Earth's rotation to the Moon.

After the birth of the moon, its surface was bombarded for almost half a billion years by the material left over from the birth of the planets of the solar system. The energy of the collisions created a sea of ​​molten magma on the Moon more than 480 kilometers deep. Slag formed from crystals formed from aluminum, silicon, oxygen and calcium, i.e. plagioclase, rose to its surface. As it cooled to anorthosite, the Moon got its first crust, from which the ancient highlands of the Moon have formed. After the bombardment stopped, the crust cooled almost completely and became motionless in about 50 million years. More matter accumulated in the crust from below, and in places it was punctured by magma flows that gave birth to volcanoes in the highlands. As the heaviest elements fell downward, an iron-nickel core formed on the Moon. At the same time, large basins were formed on its surface in large collisions during 500 million years between 4.5 and 4 billion years ago. Asteroids with a diameter of about 100 kilometers gave birth to the Australe, Nubium, Tranquilitatis and Focunditatis basins. Newer collisions obliterated traces of older collisions, which may still be faintly distinguishable. One of the largest collisions created the huge Aitken Basin around the Moon's south pole, the largest crater in the Solar System. All the large basins were formed no later than 3.9 billion years ago, when the large bodies that roamed the solar system were already exhausted. The basins were filled over the next hundreds of millions of years by melt from the Moon's interior