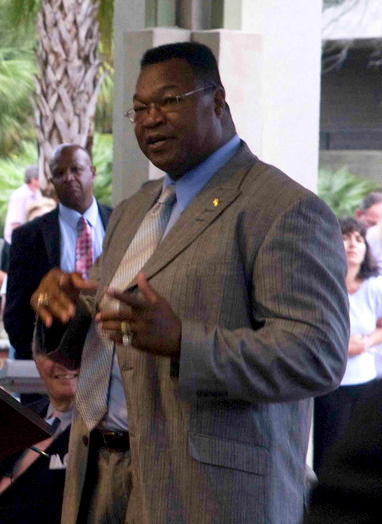 Larry Holmes (born March 11, 1949 in Cuthbert, Georgia) is an American professional boxer and world heavyweight champion, nicknamed The Easton Assassin after his hometown of Easton, Pennsylvania. During his career, he held the WBC and IBF world championships, and went undefeated in as many as 48 fights (one less than the only undefeated world heavyweight champion, Rocky Marciano). Holmes has 21 successful heavyweight title defenses, second most behind Joe Louis (25).

In his amateur career, Holmes fought 22 matches and achieved 19 victories. He served as the training partner of world heavyweight champion Muhammad Ali before turning professional in 1973. After defeating Earnie Shavers in a 12-round fight in Las Vegas on March 25, 1978 in his 27th professional fight, he was able to challenge world champion Ken Norton for the WBC heavyweight championship. On June 9, 1978, Holmes entered the fight in Las Vegas as the underdog and won the championship by a split decision of 2–1 after a 15-round fight. The match between Holmes and Norton is considered one of the best championship matches of the decade.

Holmes defended his WBC title for the first time against Alfredo Evangelista. He went on to defeat challengers Ossie Ocasio, Mike Weaver, Earnie Shavers, Lorenzo Zanoni, Leroy Jones and Scott LeDoux, before facing the returning Muhammad Ali in October 1980. Two years after his last fight, Ali trained hard and shed the accumulated pounds to get into match condition. When the match started, however, the 30-year-old Holmes proved to be faster than the 38-year-old Ali, who had to give up the match before the start of the 11th round after opening the corners of his eyes. For the first time in his career, Muhammad Ali was unable to continue the match to the end. The referee of the match, Ali's coach and even Holmes have later said that they wished the match would end earlier. After the match, Holmes went to Ali's locker room to meet him and told him that he was really sorry for beating him and that he loved him. Despite his victory, Holmes was depressed and he later said that he was more proud of "sparring with young Al than beating old Al". After Ali, Holmes successfully defended his championship against Trevor Berbick, Leon Spinks, Renaldo Snipes, Gerry Cooney, Randall "Tex" Cobb, Lucien Rodriguez , opposite Tim Witherspoon and Scott Frank.

Holmes relinquished his WBC title after falling out with promoter Don King. However, he was recognized as the champion of the new IBF, and he defended this title against James Smith, David Bey and Carl Williams until he lost the title on September 21, 1985 in Las Vegas to challenger Michael Spinks. When he lost for the first time, Holmes had managed to fight 48 times as a professional undefeated. Ring Magazine named the match the surprise of the year. Holmes faced Spinks again on April 19, 1986 at the Hilton Hotel in Las Vegas, a 2–1 decision for Spinks. After the defeat, he announced his retirement.

After being retired for 1.5 years, Holmes returned to the ring against Mike Tyson as a challenger for the WBC, IBF and WBA world championships. The match ended already in the fourth round with Tyson's victory with a technical knockout after Holmes was on the canvas three times during the round. Once again, Holmes had time to end his career, but returned in 1991. After winning six fights, including former WBO heavyweight champion Ray Mercer,