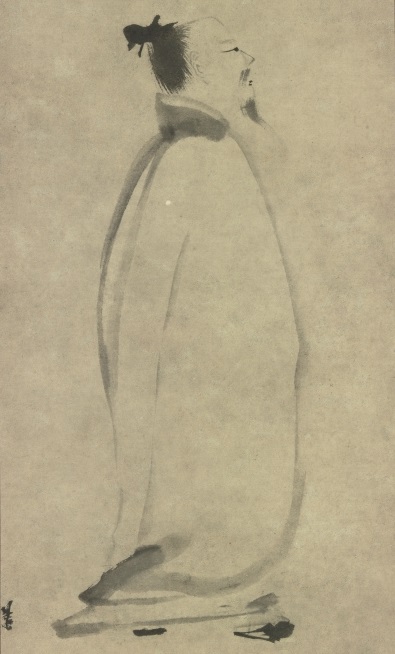 Li Bai (Chinese: 李白, Lǐ Bó or Lǐ Bái, often also as Li Po, 701–762) was one of the most famous poets of the golden age of Chinese classical poetry, the Tang period. Li Bai is especially known for his bohemian, Taoist nature depictions and drinking songs. His fame has also been increased by many legends associated with him. According to the most famous legend, Li Bai drowned after falling from a boat while drunkenly trying to reach the image of the moon.

Li Bai was born in 701 in Central Asia and was given the courtesy name (zi) Taibai after Venus after his mother saw the planet in a dream shortly before Li was born. In some contexts, it has been suggested that Li was not of Han Chinese background, but belonged to another ethnic group, having been born in Central Asia. However, according to the official opinion, Li's grandfather had moved to the region from the heartland of China. After his son's birth, Li's father moved with his family to the region of Shu, or present-day Sichuan, which Li later considered his home region. Li became interested in Taoist immortality, but on the other hand, he also dreamed of a typical Confucian career in the court. Due to various influences, Li became interested in many different subjects in his youth, such as Confucian classics, philosophical treatises, fencing and archery. Li spent a large part of his life traveling. He left his native Sichuan at the age of 26, sailing down the Yangtze River, living a carefree life drinking and meeting the public figures of his time while developing his persona as an obsessive poet. At the age of 41, Li was recruited to the Hanlin Academy in Chang'an, or present-day Xi'an, on the recommendation of his Taoist friend Wu Yun. He quickly became well known when the poet He Zhizhang described one of his poems as The Road to Shu Is Harsh? in a laudatory tone. However, just a short while later, Li offended some influential officials and lost his position at the Academy, spending the rest of his life wandering from place to place. Li differed from the other great poets of the Tang period in that he never completed an official degree and held no official position after his academic career.In 756, Li joined the forces of Prince Li, the emperor's 16th son, as a poet. A little later, Prince Li was accused of trying to establish his own state and was executed. Li Bai was captured in Jiujiang, from where he was exiled to Yelang. Before his arrival there, however, an order for a general amnesty was issued, allowing Li to return to eastern China. Li is said to have died at a relative's house in 762 in Dangtu, Anhui province, although according to a well-known legend, he drowned after falling from a boat while drunkenly trying to reach the image festival of the moon.

Li Bai is considered one of the most significant literary influences of the Tang Dynasty, only slightly overshadowed by Du Fu, considered the best poet in China. About a thousand poems from Li Bai have been preserved. He wrote according to traditional poetic forms, but also made significant changes to, for example, poetic meters and rhythm. Many of Li's poems reflect bitterness towards the emperor, from whom Li would have longed for recognition for his poetry. On the other hand, Li's poetry reflects his romantic outlook on life, and perhaps as one of China's most famous wine lovers, the joy of drinking often appears in his poetry. Other themes in Li's poetry are, for example, friendship, loneliness and the passage of time.

More reading about Li Bai can be found in Wikidata