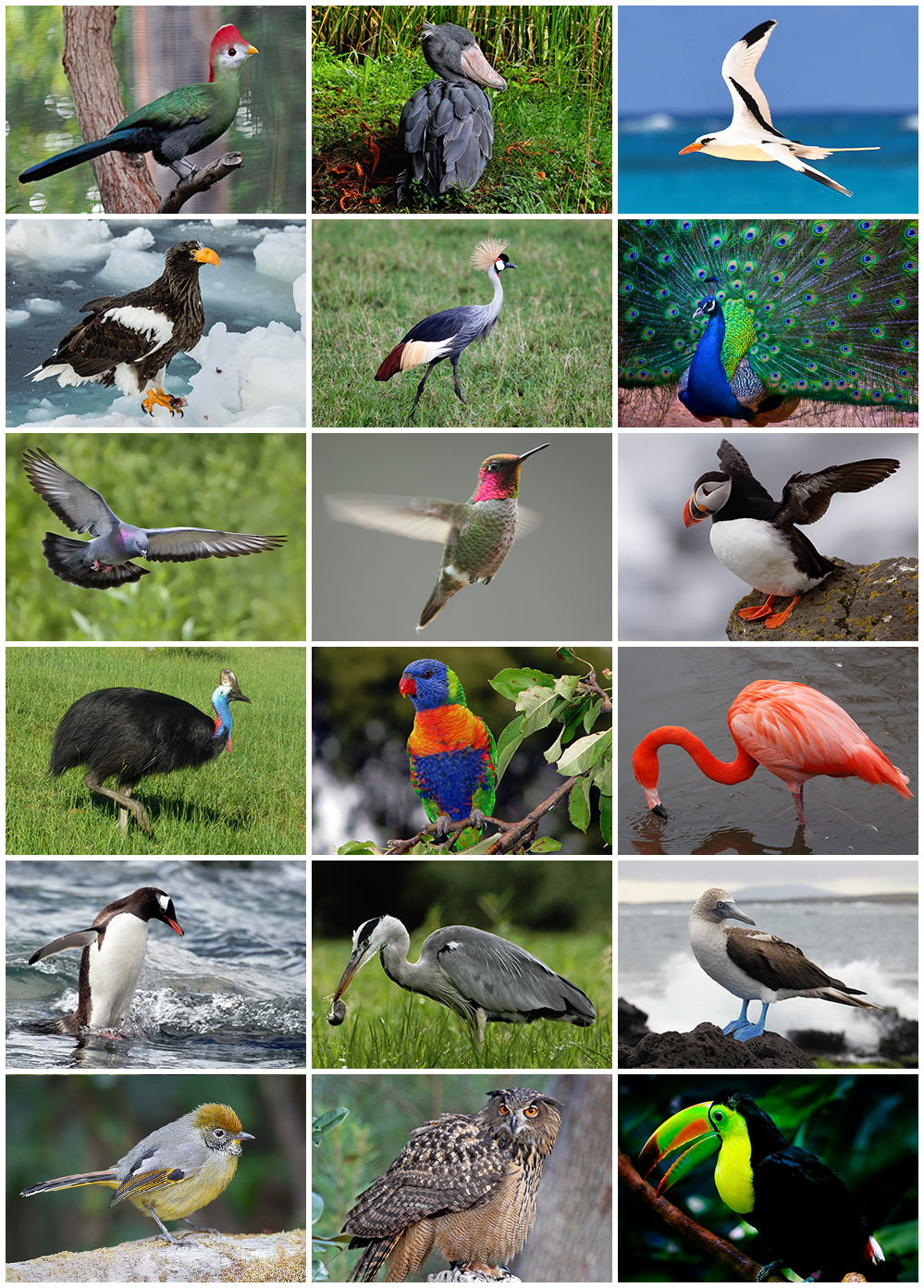 Birds (Aves) are even-tempered, egg-laying and feathered vertebrates, whose wings give most of them the ability to fly. More than 9,000 species of birds are known. Based on the fossil record, birds evolved from dinosaurs in the Jurassic period, and they are classified as theropod subgroups. Feathers and molts for birds evolved from scales to aid in flight and to insulate and dissipate heat. Over time, they began to enable flying as well. Nowadays, there are also flightless birds, but they are also descended from flying strains. Bird species are very similar to each other, and all species have the same basic structure. Birds have beaks but no teeth. The forelimbs have turned into wings, and most birds can fly. The bird's circulatory and respiratory organs are very well developed. The bones are hollow and light. The vision of birds is very precise, the field of vision is wide and the color vision is highly developed. Some species have a magnetic sense. Birds are quite long-lived for their size, and some species are highly intelligent. There is a huge range of different bird species' food and its procurement methods, but the species are usually structurally specialized in a certain type of food and food procurement method. Birds reproduce by laying eggs. Some species build a nest for their eggs, but others lay their eggs on bare ground. It is typical for birds to choose a mate that dogs compete for females with their song or plumage. Many sparrows are known for their versatile song. Many species that spend their summer in polar regions are migratory birds that fly to warmer regions for the winter. Man raises birds for food and eggs. Soft feathers or down are used as stuffing and excrement as fertilizer. Birds are also useful by spreading seeds and pollinating plants. On the other hand, birds can cause a lot of damage to, for example, agriculture. Birds can be enjoyed in many ways, for example by observing them, hunting them or keeping them as pets.

Evolution of birds from dinosaurs

Birds evolved from dinosaurs. The first signs of birds in the fossil record are dated to the Middle and Late Jurassic period, 165–150 million years ago. The earliest birds were the size of today's chickens, light-built, winged and covered in feathers. From the beginning and middle stages of the Jurassic period, only so insignificant fossil remains of birds have been found that it has not been possible to prove a relationship with certainty. More fossilized remains of birds and feathers begin to appear in the strata at the end of the Jurassic period 150 million years ago. The origin of birds has been found by combining information obtained from fossils, species living today, molecular phylogenetic studies and numerical analyses. Birds were not thought to have evolved from reptiles until the late Jurassic Archeopteryx skeleton was found in Germany in 1861. It clearly combined familiar reptilian features with bird-like features such as feathers and wings. Based on this fossil, English biologist Thomas Henry Huxley proposed that birds descended from dinosaurs. However, Huxley's theory remained on the sidelines until the 1960s, and birds were believed to have descended from other reptiles. New bird-like dinosaur fossils discovered since the 1960s caused the majority of paleontologists to lean towards the connection between dinosaurs and birds in the 1990s. The concept began to be generally accepted among ornithologists at the latest when thousands of fossils of feathered dinosaurs were found in China at the end of the decade. Since then, it has also been found that many dinosaurs that did not