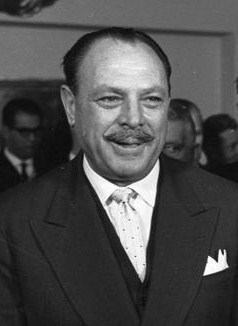 Mohammad Ajub Khan (also Ayub Khan, 14 May 1907 - 19 April 1974) was Pakistan's political leader from 1958 to 1969. He became Commander-in-Chief of the Pakistan Armed Forces in 1951 and was the youngest general and military marshal in Pakistan's military history. He led Pakistan’s first military coup in 1958. He had received his training in the British Indian Army. Khan signed an agreement with India on the Punjab irrigation system. The project was funded by the World Bank in 1960. Khan carried out a land reform aimed at improving the living conditions of land tenants and forcibly releasing agricultural surplus land for redistribution. The maximum amounts were 200 hectares in irrigated areas and more than 400 hectares in other areas. Land reform provided a positive impetus to Pakistan’s economic recovery. Production growth was rapid, at five percent a year. Khan also implemented a population policy where family planning came first. Khan introduced a new constitution in 1962. The opposition complained about the lack of political freedom. Khan started a war against India in 1965 because of the situation in Kashmir. Pakistan was attacked by armored forces on September 1, 1965. Ayub Khan accepted the Soviet mediation proposal and the war ended on September 22, 1965. Lal Bahadur Shastri and Khan negotiated in Tashkent under Soviet Prime Minister Alexei Kosygin in January 1966. After that, Khan's popularity in Pakistan declined and he lost his arm. As president, he maintained cool relations with India, and the India-Pakistan war in 1965 was a turning point in his career. However, the unpopular Khan did not relinquish power until 1969.