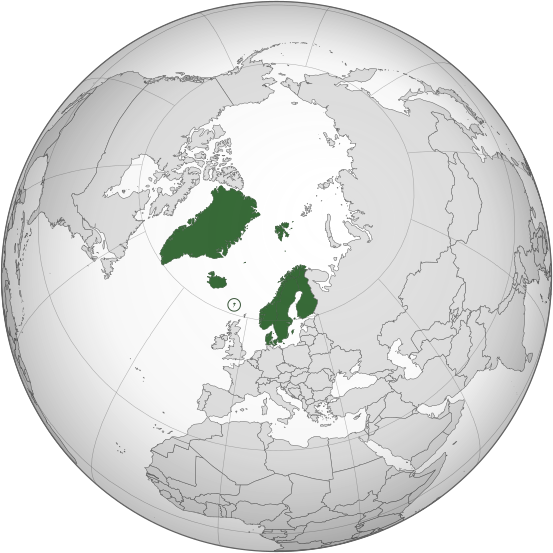 The common history of the Nordic countries begins at the beginning of the 11th century. During the time of Leif Erikinpoja from Greenland, Norway was a great power, when a large part of the North was united for the first time into one kingdom. Norway also gradually took control of the Faroe Islands, Iceland and Greenland. The Norwegians also had close interaction with the Viking kings of Sweden and Denmark. In addition to Canada, the Nordic Vikings also ended up in Russia and the Mediterranean. In addition to shipping, the Vikings also increased trade and agriculture in the North.

The Arrival of Christianity

At the turn of the millennium, Christianity arrived in the North and also approached the rest of Europe culturally. With Christianity, large cathedrals were built in Stavanger and Ribe. Numerous monasteries and episcopal seats were also established in the Nordic countries. The development also led to the establishment of townships and the construction of castles. Through the store, eating habits and clothing also diversified. The black death that spread in Europe in the late 14th century was wiping out the entire population of Norway and Iceland. The Nordic population of West Greenland also died in the early 15th century, but the cause has not been confirmed. The interaction between Greenland and the rest of the North was suspended for almost 300 years.

The Middle Ages of Trade Unions and Wars

The Nordic region's cultural, economic and political role was strengthened in the late Middle Ages with the accession of Sweden, Norway and Denmark to the Kalmar Union in 1397. The old overseas territories of Norway - the Shetland Islands, the Orkney Islands, the Faroe Islands and Iceland - and Sweden and the Åland Islands. In its early years, the Union was strong, but gradually it began to be divided internally into Denmark-Norway and Sweden-Finland. In the end, the Union split in two. The period of unrest that followed the division was preceded by the Stockholm Massacre in 1520, when King Christian II of Denmark beheaded noble and famous townspeople to retain power in Sweden. During the late Middle Ages and Renaissance, the North lagged behind the rest of Europe. At the same time, Sweden developed into a European superpower that ruled much of the Baltic Sea region, including most of what is now the Baltics and parts of what is now Germany and Poland. Denmark-Norway began to exercise colonial rule by taking control of the city of Tranquebar in India, part of present-day Ghana, and three Caribbean islands: St. Thomas, St. Jan, and St. Croix. The islands were under Danish rule until 1917. However, Denmark-Norway or Sweden-Finland did not rise to a similar position in relation to European urban states or sea powers such as Spain, Portugal, the Netherlands and England. Development was hampered by repeated wars between the former Union countries, which turned largely to Swedish victory. First, Denmark had to cede to Sweden the developed and fertile provinces of Skåne, Halland and Blekinge. In 1814, Norway also moved to Sweden. Sweden again lost Finland to Russia in 1809. It had already lost so-called Old Finland in 1721. The colonized parts of Iceland, the Faroe Islands and Greenland remained under Danish rule.

Convergence next to superpower politics

The Nordic countries have been converging since the late 19th century. As a first step, Denmark and Sweden ended their warfare