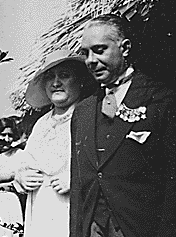 Rafael Leónidas Trujillo Molina (October 24, 1891 - May 30, 1961) was the leader of the Dominican Republic from 1930 to 1961. Trujillo served as president of the country from 1930 to 1938 and later from 1942 to 1952, but in reality he was the de facto leader of the Dominican Republic until his death. Trujillo began his career as commander of the National Guard of the Dominican Republic, but in 1930 he was involved in the ousting of democratically elected President Horacio Vasqués. He held himself president in the post-coup election and used his new power to gain monetary and economic influence. During his 31-year reign, Trujillo practiced a dictatorship based on totalitarianism, which received U.S. support thanks to Trujillo’s anti-communist and right-wing ideas. However, the upper class in the Dominican Republic got tired of Trujillo’s oppression and conspiracy, leading to the assassination of the dictator as well as a failed coup attempt.

Rafael Leónidas Trujillo was born on October 24, 1891 in the town of San Cristóbal to a poor mulatto family. Her parents were José Trujillo Valdez and Altagracia Julia Molina Chavalier. Trujillo also had eight siblings: Rosa María Julieta, José "Petán" Arismendy, Amable "Pipi" Romero, Aníbal Julio, Nieve Luisa, Pedro Vetilio, Ofelia Japonesa and Héctor Bienvenido. He received his basic education and after graduating from school, he worked as a guardian of sugar cane plantation and later as a telegraph operator.

In the early 20th century, the United States began to monitor the political and economic development of the Dominican Republic until, in 1916, the U.S. Marine Corps occupied the entire island nation at the behest of President Woodrow Wilson. During the occupation, the Americans established a national guard to maintain peace and order after U.S. troops withdrew from the Dominican Republic. In 1918 Trujillo joined the Guards, and because he was considered a promising soldier by the United States, in 1921 Trujillo was transferred to a military school for officer training. Trujillo rose rapidly on the guard scale and in 1922 his military rank was already captain. In 1923, he was appointed “First County Inspector”. Trujillo's rapid rise in military rank is explained by the fact that, unlike most Dominicans, he volunteered to cooperate with the Americans. When the U.S. occupation ended in 1924, Trujillo had become a lieutenant colonel. In 1925, he was promoted to colonel and appointed Chief of Police of the Dominican Republic. By 1927, the National Guard, founded by the United States, was reorganized into the Army of the Dominican Republic, and at the same time Trujillo became both Brigadier General and Commander-in-Chief of the Armed Forces. However, Trujillo began secretly planning a coup, and in the early 1930s he formed a conspiracy with his political ally, Rafael Estrella Ureña, to overthrow President Horacio Vasqués. On March 3, 1930, Estrella ousted Vasqués. Because Trujillo declared the army “neutral”, the army had no authority to intervene in the coup and return Vasqués to power. After Estrella rose to power, declared himself the new president, and promised the residents of the Dominican Republic to hold free elections later that year, Trujillo betrayed his ally. He launched a violent campaign of terror in which his supporters beat other candidates and threatened the citizens of the island state to vote for Trujillo. On August 16, 1930, Trujillo was elected President of the Dominican Republic, although he was the only remaining candidate.