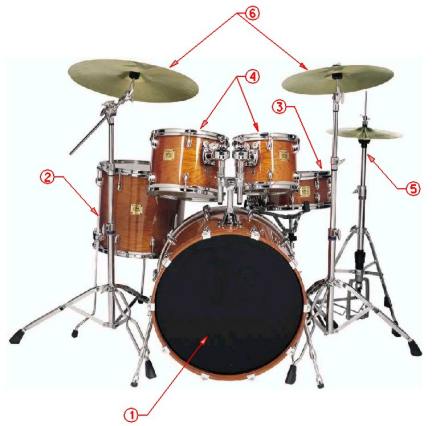 The drum kit (drum system) is a collection of percussion instruments developed in the first half of the 20th century and set in a formation. Most often, a drum kit includes a snare drum, one or more tom toms, a floor atom, a bass drum, and plates. The modern drum set of five drums (snare drum, 3 tom, bass drum) took shape in the 1960s. The most common "shell-pack" includes a 20-inch-diameter bass drum, 10-, 12-, and 14-inch toms, a 14-inch snare drum, and three plates, most often 14-, 16-, and 20-inch. Depending on their intended use, drums can be found from small sets used to play jazz to large sets used in metal music. The bass drum is pedaled, but other drums and cymbals are struck with sticks or whisks. Sample rock beat (help)

The drum kit was born in the southern United States when the music and playing culture of the African population (slaves) met the music and military orchestra culture of European origin. In the wake of the U.S. Civil War, there were many instruments left in the area by military bands, including snare and bass drums and hand cymbals. The snare drum was also called a small or marching drum. These instruments were introduced by Africans in part because their own traditional instruments were not allowed. As early as the 19th century, it was invented to put the bass drum on the ground, until then it had been strapped to the player. Bill Ludwig and some others developed a pedal for the bass drum on the ground as early as the early 20th century, when the snare drum already had a stand. That's how the drummer could sit while playing. On top of the bass drum, there were often various percussion instruments, such as a cow bell and a wooden pencil case, to color the playing. Later, the so-called the floor-Tomi and, as the perimeter of the drums decreases, also the little Tomi to be attached to the bass drum. It was not until the 1920s that Hi-Hat (Haitsu / Haikka) was born, preceded by so-called sock symbals, which consisted of a cymbal on the ground and attached to the foot and played on the foot. The good thing about Hi-Hat is the high enough stand that allowed it to be played with sticks in addition to the foot pedal. The dampers of the time were quite large in diameter (about 20 "and over), there were no actual crashes at first, and instead of the comp damper, a cymbal resembling the current china was used.

The most important part of the drum kit is the snare drum, which is held between the legs in a stand. Snare drum is a drumming sound that is familiar from marching music. The rattling is created by a snare mat made of metal springs, which is lifted against the lower membrane of the drum by means of a snare mechanism. The tension of the carpet can be adjusted and it can be switched off completely with the carpet mechanism. Snare drum diameters typically range from 12 "to 15" (inches), the most common size being 14 ". Depth ranges from 3" to 8 ", usually 5" to 6.5 ". Snails are made of metal or wood, mainly birch or maple.

The bass drum lies on its side and is played with the foot pedal, which is tightened on the rim of the bass drum. There may be two bass drums in the drum set, or one bass drum can be played. with a double pedal, making it possible to play with both feet using faster-than-usual bass drum patterns. The diameter of the bass drum varies between 16 "and 30", but the most common sizes are 18 ", 20" and 22 "(quite often also 24"). Depth is between 14 "and 20".

Hi-hat plates are attached to the hi-hat rack so that one is lying on top of the blanket with the hood facing down.

INSERT INTO `wiki_article`(`id`, `article_id`, `title`, `article`, `img_url`) VALUES ('NULL()','Rumpusetti','Rumpusetti','Hi-hat plates are attached to the hi-hat rack so that one is lying on top of the blanket with the hood facing down.','https://upload.wikimedia.org/wikipedia/commons/7/77/Drumkit.jpg')