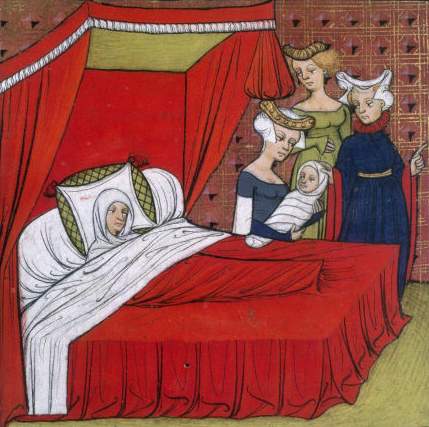 Parturition is the final stage of pregnancy, where in mammals the cub grown in the female's womb is transferred to the outside world through the female's vagina or by caesarean section. In humans, childbirth takes place on average about 38 weeks (9 months) after conception. A pregnancy is full-term when it has lasted at least 37 and at most 42 weeks. Labor can be divided into three phases, which are the opening phase, the effort phase and the removal of the remnants of pregnancy. Medicines such as oxytocin or dinoprostone can be used to initiate labor. In many countries, attempts have been made to transfer births to hospital maternity wards or to specialized maternity hospitals or maternity facilities. However, in the Netherlands, for example, about one in three children is born at home as planned. Typically, a midwife assists the birthing person in both hospital and home births. The advantage of specialized institutions is the possibility of an emergency c-section. On the other hand, for example, in Great Britain, a planned home birth has been found to be as safe as a hospital birth for low-risk births, and it is recommended especially for those low-risk births who are experienced birthers. In the past, births have taken place, for example, in rural saunas. In the Soviet Union, visitors were prohibited from entering maternity hospitals due to fear of infection.

Usually, labor starts with uterine contractions, which are less frequent at first and become more frequent and stronger towards the effort phase. The lower part of the uterus and the vagina expand as a result of the contractions into the birth canal, when the fetal membranes usually burst and the amniotic fluid exits through the vagina. The flow of amniotic fluid can also happen before contractions start. The opening phase begins when contractions occur regularly every 10 minutes. The cervix shortens, and the cervix opens. When the cervix is ​​10 centimeters in diameter and the fetal head has descended to the pelvic floor, the opening phase is considered to have ended. In terms of duration, the length of the opening phase varies a lot, it is several hours and is usually shorter for those who have given birth before than for first-time mothers.

After the fetus's head descends on the pelvic floor, it starts pressing on the mother's anus during contractions, which causes the mother to exert strong efforts. During the labor phase, which lasts from a couple of minutes to several hours, the fetus is normally born head first with its face towards the mother's back. Too fast exit of the head may cause tears in the perineum. After the birth of the head, the midwife first alternately helps the shoulders of the fetus and then the rest of the body out of the mother. The pushing phase ends with the birth of the child. After these stages of labor, the fetal membranes and the placenta leave the mother in the last phase, the postpartum phase. After giving birth, you may still feel afterburns, which are caused by the contraction of the uterus as it returns to its normal size. source?

A fetus can be born with different supply. The word means the position of the fetus in relation to the mother's body at the start of labor. Offers include, for example Furious delivery baby's face facing mother's back; ruling Open-mouth supply baby's face facing the mother's stomach Face delivery the baby is born face first and cannot be born from the bottom; if necessary, the use of aids or caesarean section Breech position the baby is born feet first; giving birth at lower term is risky and requires a doctor's intervention (external translation, aids or caesarean section)

If the mother cannot give birth on her own, the birth is assisted with birthing instruments, mainly suction cups or forceps. The risks of these complications affect both mother and child and can be serious at worst. In more difficult cases, a caesarean section is performed. A child can also die before birth. An estimated 0.5 percent of pregnancies p�