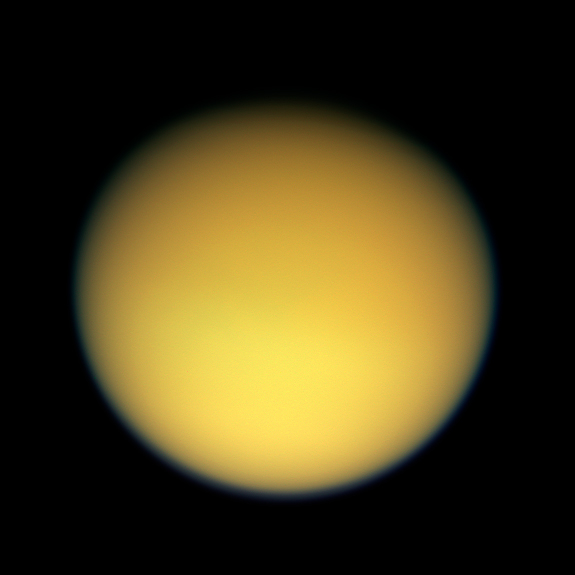 Titan is Saturn's largest moon. It was discovered by the Dutchman Christiaan Huygens on March 25, 1655. Titan is larger in diameter than the planet Mercury, but much smaller in mass than Mercury. Titan is the second largest moon in the solar system after Ganymedes. Titan is so cold that, among other things, the water is left on the surface and one of the building blocks of the "bedrock", and instead of water, methane flows in the lakes. Titan is the only moon in the solar system with a dense atmosphere. The atmosphere consists mainly of nitrogen, methane and ethane, and the mist in it obscures the features of the moon in visible light. The atmosphere still transmits radar waves and infrared. The atmosphere makes it possible for there to be some hydrocarbon lakes on the surface of Titan. Otherwise, the surface of Titan has volcanic formations, tear valleys, wind-shaped dunes and streaky formations, and a few craters as well. The Titan Moon is of particular interest to scientists because it is believed to be somewhat reminiscent of early Earth. Even the occurrence of life is considered possible on the basis of abundant hydrocarbons. It has been studied with the Hubble Space Telescope and the Cassini-Huygens spacecraft, among others.

The Titan is fairly flat, with altitude variation probably in the order of a mile or two. The surface of Titan as a whole is known very inaccurately from images taken from the ground and from distant images taken by a Cassini sonar. The beam of Cassini's radar is so narrow that it is not possible to map large areas at a time with one pass. The surface of the moon is covered with a mixture of water ice and hydrocarbons. The ice is like rocks. Among the ice is a coarse mineral of sand or clay. Based on Huygens probe measurements, the surface temperature is estimated to be 93.8 Kelvin (approximately −180 ° C). The shell of titanium consists of ice, beneath which is estimated to be a molten layer about ten kilometers thick. It is born of the frictional heating caused by the tidal forces of Saturn. From there, liquid "lava", which is a mixture of water and ammonia, probably erupts from time to time in the "ice volcanoes." Lava is formed due to the heating effect of radioactive decay, as in Earth. The lava eroded by the icy volcanoes is likely to be denser than the ice, and will require an extra source of power, which may be a tidal phenomenon. The tidal forces caused by Saturn on the surface of Titan are 400 times greater than those caused by the Moon on Earth. Prior to the Cassini spacecraft, it was speculated that the most significant features of Titan's surface would be collision craters and similar formations, as in the Moon. But surprisingly, Titan was more reminiscent of the Earth's geological and surface features. Images taken from Titan show only a few meteorite craters because the surface regenerates so quickly. Infrared images taken from the surface of Titan reveal dark plains and light volcanic areas, the most famous of which is Xanadu. Xanadu has a wide variety of terrain, including cracks. Light areas are assumed to be slightly above darker areas. The vast dark areas at the equator were previously interpreted as seas, but according to current knowledge, they are dune fields created from hydrocarbon sand and dust. The large, dark dry area of ​​the equator is called Shangri-La. Light, round domes resembling Venus' volcanic "pancakes" stand out from the surface. A pale mountain, perhaps covered with methane snow, has also been found, probably formed by the two "continental plates" pressing against each other. According to one view, the mountains of Titan were born when it shrank. At the border of different types of areas, along the coastline, terrain features reminiscent of riverbeds and estuaries spread in places. In addition, there are dark short canal sections on the surface, the formation of which from methane sources is considered to be more likely to originate than methane precipitation.

INSERT INTO `wiki_article`(`id`, `article_id`, `title`, `article`, `img_url`) VALUES ('NULL()','Titan_(kuu)','Titan (moon)','In addition, there are dark short canal sections on the surface, the formation of which from methane sources is considered to be more likely to originate than methane precipitation.','https://upload.wikimedia.org/wikipedia/commons/d/dd/Titan_Visible.jpg')