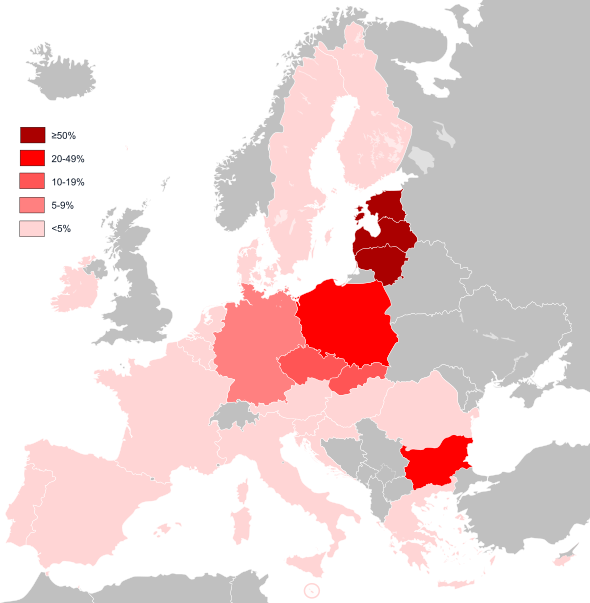 Russian (ру́сский язы́к, Russian jazyk, [ˈru.skʲij jɪ.ˈzɨk] listen to pronunciation?) Belongs to the East Slavic languages, which also include Ukrainian, Belarusian and Ruthenian. An estimated 275 million people speak Russian, of which about 165 million are native speakers. Russian is written in Cyrillic letters. Russia is the official language of Russia and also has official status in Kazakhstan, Kyrgyzstan and Belarus. Russia is also widely spoken in the countries of the Commonwealth of Independent States, including Mongolia. Russian is one of the six official languages ​​of the United Nations. Russia used to be the de facto official language of the Soviet Union. Russia is the eighth most spoken language in the world. In 1809–1863 and 1900–1917 (years of oppression), Russia was one of the official languages ​​of Finland when Finland belonged to Russia. According to Statistics Finland, there are currently 62,554 people living in Finland whose mother tongue is registered as Russian. Many words have been borrowed from Russia in Finnish as well. There are several loanwords in everyday use, including tavern (<кабак [Kabak]), neat (<чистый, [ˈtʃʲistɨj]) and the slang word mesta ‘place’ (<место, [mʲesta]). The words Vanna and palttoo are also known in the Eastern dialects. Russian is taught in some Finnish schools.

About 161.7 million people speak Russian as their mother tongue, of which 137 million live in Russia. As a second language, it also has 110 million speakers. In addition to Russia, it is the official language in Kazakhstan, Kyrgyzstan and Belarus, as well as in the separatist regions of Abkhazia, South Ossetia and Transnistria. The language has the status of a regional official language in southern and eastern Ukraine. In Tajikistan, Russia has the status of an official language of communication between peoples. Significant Russian-speaking minorities live in the Baltic countries (37% of the population in Latvia and 30% of the population in Estonia) and Israel (15% of the population). In addition, it is widely spoken as a foreign language in Azerbaijan, Uzbekistan and Mongolia.

The modern Russian alphabet is largely based on the Cyrillic alphabet of 1708 and contains 33 letters: Many do not use the letter Ё but write it as Е.

The Russian language has 42 phonemes: 37 consonants and five or six vowels (/ a /, / e /, / i /, / o / and / u /; / ɨ / can be counted as its own phoneme or as an allophone for / i /). The large number of consonant phonemes is due to the fact that many consonants have to count their dissolved counterparts as a separate phoneme. Dissolution means the rising of the tongue towards the palate in a j-like position, whereby the consonant sounds "brighter" than its insoluble counterpart. In addition, the dissolved equivalents of the sounds / t / and / d / are clearly affixed, making them belong to [tsʲ] and [dzʲ]. Dissolved consonants are described in the table by the raised j. At the beginning of a syllable, the vowels Е, Ё, И, Ю, and Я are pronounced beginning with / j / (e.g., Е is pronounced [je], Ё [already], and Я usually [ji], with accented [ja]). After the consonant, they do not sound as / j / but indicate that the consonant is dissolved. At the end of the word, the consonant is dissolved by then typing a soft sign Ь. In addition, the soft character and the hard character Ъ are intended to act as a syllable separator to indicate that the next Е, Ё, И, Ю, or Я is exceptionally pronounced with / j /. For example, the name Татьяна consists of the bytes Тать-я-на [tʌtʲˈja.nʌ]; without the soft sign, the hyphenation would be * Та-тя-на, where тя would be pronounced dissolved, and the pronunciation would be [tʌ.tʲa.nʌ]. A hard sign also prevents the previous consonant from dissolving: cf. eg сесть [ˈsʲesʲtʲ] and съесть [ˈsjesʲtʲ]. A hard sign is relatively rare in modern Russia. Its wider use was abandoned in the early 20th century because