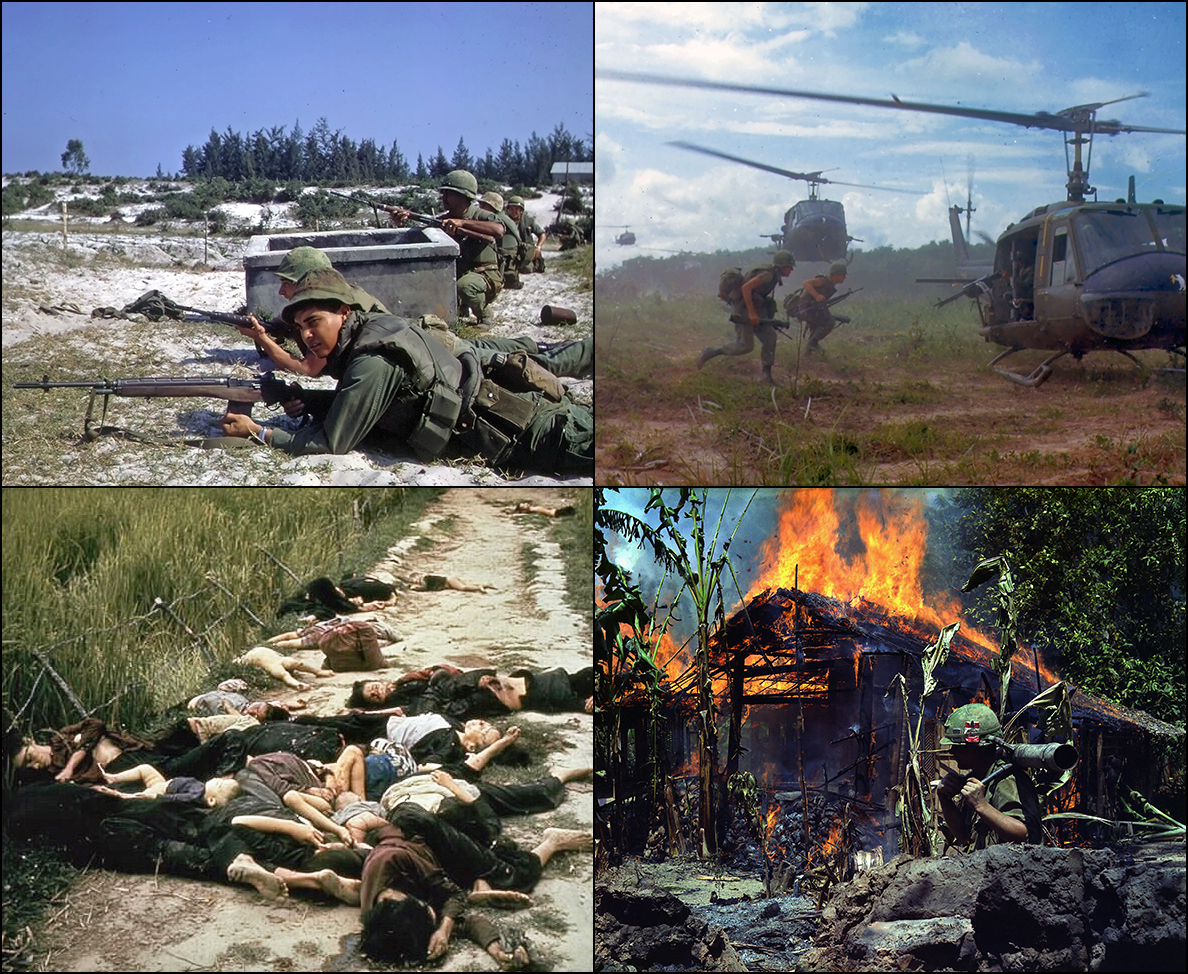 The Vietnam War (also the Second Indochina War, English Vietnam War, viet. Kháng dục trộng Mỹ, "war of resistance against the United States") was a war fought in Vietnam between 1955 and 1976, which was fought between the states of North and South Vietnam and the international allies of both sides . The Vietnam War can be defined as one of the so-called proxy wars of the Cold War. Before the Vietnam War, an anti-colonial war had been fought in Vietnam, first against the Japanese and then against the French. After the defeat at Điện Biên Phủ in 1954, the United States became the most prominent international player – at first as an advisor, but in 1964, after the Gulf of Tonkin incident, openly. The fighting was mainly on the soil of South Vietnam, but the US bombing flights also extended to the territory of North Vietnam and, in the so-called black operations, partly also to the territory of Laos and Cambodia. In addition to the forces of the Saigon government, the forces of the United States, South Korea, Thailand, Australia, New Zealand and the Philippines fought on the southern side. In addition to the Hanoi government, the North Vietnamese forces included the South Vietnamese National Liberation Front, a guerilla movement operating in South Vietnam. The North received military support from the Soviet Union and China. As for the US forces, the hostilities ended with a peace treaty in Paris on January 27, 1973, after the armistice. While the armistice was in effect, the FNL and North Vietnamese forces resumed the attack on South Vietnam, and the United States no longer wanted to send troops to help South Vietnam. Saigon was captured by North Vietnamese forces, resulting in the capitulation of the Saigon government on April 30, 1975. On July 2, 1976, South and North Vietnam were united to form the Socialist Republic of Vietnam. On the South Vietnamese side, 230,000 South Vietnamese, 58,000 American, 4,000 South Korean, and 500 Australian soldiers died. 1.1 million North Vietnamese soldiers died on the North Vietnamese side. Two million civilians died in the Vietnam War, the clear majority of them in the southern parts of the country. After the fall of South Vietnam, a large number of Vietnamese fled the country by boat, and thus the concept of boat refugee was born. A small group of them also came to Finland, which formed the Finnish Vietnamese. The Vietnam war has been called the world's first televised war in Western countries. The war influenced the abolition of conscription in the United States in the early 1970s. The defeat of the United States has been used as an example of the view that guerrilla warfare is very difficult to win.

The Vietnam War was a consequence of the French Indochina War. It is sometimes called the second Indochina war. During World War II, Vichy France had collaborated with Imperial Japan, and Vietnam was occupied by the Japanese army, although its administration remained under the French puppet ruler, Bảo Đại. After the surrender of the Japanese, France had to fight for control of its colony with the nationalist Việt Minh independence movement. This was led by Communist Party leader Ho Chi Minh. After the Việt Minh defeated the French colonial army in the Battle of Điện Biên Phủ in 1954, Vietnam gained its independence. The United States had supplied France with weapons for its military operations in Vietnam, and at that time it was even considered, for example, to resolve the battle of Điện Biên Phủ with a US nuclear weapon. The Geneva conference organized because of this led to the - originally intended to be temporary - division of Vietnam into south and north. The north was ruled by Ho Chi Minh and the south by Emperor Bảo Đại. In 1955, the South Vietnamese monarchy was overthrown, and Prime Minister Ngô Đình Diệm took over as head of a state that was declared a republic. The United States began to help Diệm's government. Diệm and Ho Chi